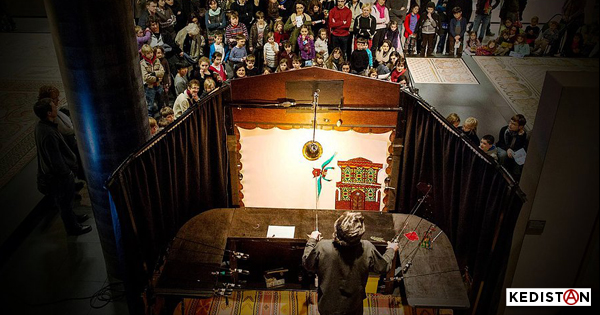 Perhaps you have heard about Karagöz?

Or seen some of its characters, or heard their quips?…

Did you know Karagöz and his friends have been speaking French for fifteen years and are still keeping alive this traditional Turkish theater of the sixteenth century?

Since the sixteenth century, Karagöz has been one of the major art forms of traditional  Turkish theater. And since 2009 it is listed on UNESCO’s immaterial cultural heritage of humanity. 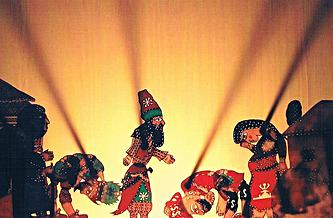 Ürüsan (or Rûsen) Yildiz is Anatolian, the son of a family that migrated to France when he was only two years old… His meeting with Karagöz during a performance in1995 in Strasburg was a defining moment in his life. From this rendez-vous onward, Ürüsan became totally immersed in the universe of Karagöz. He read, researched, and adopted its spirit and techniques, and took his place in the “continuity” of an oral tradition,  at once political, poetic and popular.

Self-taught as a shadow puppeteer, he acquired the required know-how for this popular art-form and put all his artistic talent at the service of Karagöz. Shadow theater is an all-round tradition, the artist must excel in several branches, performing in turn as author, artisan, painter, decorator, technician, manipulator, stage manager, singer and actor with multiple voices…Ürüsan follows paths left unexplored by traditional Karagöz, introducing contemporary elements of language, accessories and themes. Combining the timeless critical mentality and incisive language of traditional Karagöz with contemporary world topics makes his theater particularly timely and explosive.

Ürüsan’s characters have been setting the set ablaze since 2001. 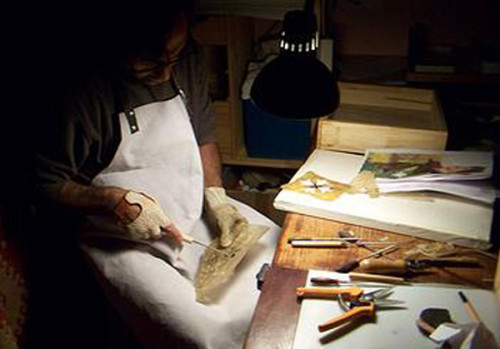 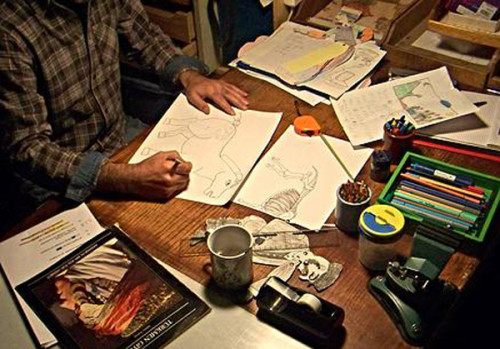 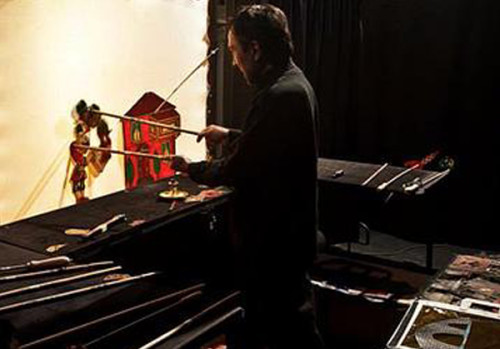 Since then, he has toured on numerous occasions, written, organized workshops, often in collaboration with his daughter Yayla (a truly rare and poetic name,  with which we at Kedistan are literaly enamored.) For music, an essential feature in Karagöz, he works with Gilles Andrieux, a multi-instrumentalist (saz, tanbur, setar, def, ney, oud, roumi kemençe…)

For a look at classical Karagöz, Ürüsan’s website is a must: Abdal Hayali. Well documented, the website provides a warm introduction to  traditional Karagöz as well as to Ürüsan’s work. 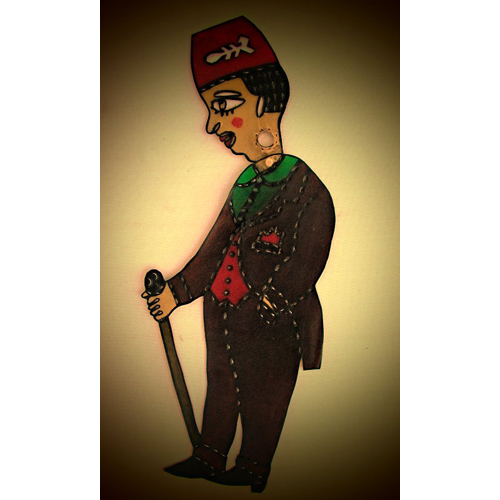 Eminently popular and urban, Karagöz is a theater within a theater: that of the multicultural society of the Ottoman Empire. With its characters’ personalities, the situations it depicts, the social classes in confrontation, the diversity of the Istanbul/Constantinople population, with its minorities, their costumes, their accents and dialects, their trades, Karagöz sets the scene for several centuries of history.

Traditional Turkish shadow theater consists of 47 classical plays. They are set in an imaginary neighborhood in which all the communities live together. It contains a long gallery of stereotypical characters, based on religious, ethnic and provincial figures of Ottoman society, those that were most frequent in Istanbul between the sixteenth and the nineteenth century.

In all the stories, on sees the two heros, KARAGÖZ: the man of the people gruff and honest; and HACIVAT: his wily sidekick. They are accompanied by town dwellers, provincials and immigrants. Each is reconizable by his costume and his accent. Other animals, plants or decorative items appear, depending on the play. The show is always accompanied by songs and two musical instruments, the kazoo and the tambourine. 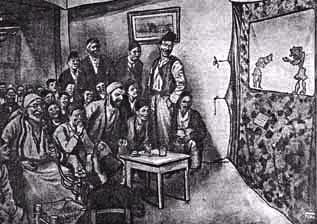 Karagöz, a theater for adults, is dominated by quid pro quo comedy born of metaphores, neologisms and sauciness that can reach into social and political satire. Contrary to other traditions (Indian, Indonesian, etc…) it is not inspired by religion. Mainly, it served as a safety valve in Ottoman society.

In 1855, an observer said: “In a country where power is absolute, Karagöz represents unlimited freedom. It is vaudeville devoid of caution or stamp of approval. Apart from the Sultan, whose person is sacred and whose actions are unassailable, not a single character in the Empire escapes its satire. It puts the Great Vizir on trial, condemns him and has him locked up in the castle with the admirals of the Black Sea and the Crimean generals. The people applaud, and the government tolerates.”

The puppets and sets in Karagöz are made of transparent skin (donkey, camel or cow). Once cut out, they are painted in see-through plant-based paints. From the rear, an oil lamp lights a white linen curtain set in a dark frame.  The figurines are manipulated with wooden sticks held horizontally and inserted in a hole designed for that purpose. The HAYALI (shadow manipulator) moves the figurines up against the screen and the light projects them on the curtain. One can clearly distinguish the colors and the costumes, the movements including the slightest gesture, thus creating an “illusion of reality”.

Karagöz proceeds in an organized fashion through four phases. The audience sits in front the curtain displaying an introductory symbol (GÔSTERMELIK) stimulating the public’s curiosity and imagination. A sound announces the beginning of the show.

PROLOGUE (MUKADDIME): Hacivat enters singing a popular poetry (SEMAI) and recites the “Ode to the Curtain” (PERDE GAZELI) celebrating the art of shadows, and calls on his friend Karagöz who delivers a parody of his poem. This last enters stage right and ends up cuffing his comrade.

DIALOGUE (MUHAVERE): the two heros enter into a word contest indirectly related to the intrigue and Karagöz having chased Hacivat, retires.

PLAY (FASIL): the intrigue,  which is often meager, provides the title for the show and other characters appear along with the sets.

EPILOGUE (BITIS): the two heros return for a chat and apologize to the public in case they disappointed or shocked anyone, and announce the upcoming show.

Here is a small interview for Kedistan readers. But, this time, we will put our questions to Karagöz rather than to Ürüsan:

Karagöz, can you tell us how you met Ürüsan?

It was in 1995 in Strasburg. Someone was manipulating me and making me act. As soon as the light came on behind the “mirror” (curtain), I felt a special presence in the packed audience. Someone was staring at me out of his black, innocence-filled eyes. At around mid-point in the show, I felt his presence behind the scene. My manipulator was not pleased, but I was!

Have things changed a bit for you since that meeting? Are you different in any way?

Yes! Ürüsan freed me from the dusty museums in which nationalist conservative bourgeois had taken me hostage! He brought me back out on the street, in the people’s heart. Since then, my life has changed completely. I feel young again, I’ve recovered my initial being. For me, it is like a rebirth!

What do you think of the world in which we live? What upsets you the most? What topics are the closest to your heart?

Nothing has changed because all is human. Domination and exploitation of man by man, the hypocrisy, the injustice…Of course, the topics are the same but with a contemporary flavor.

We thank Karagöz and his lifelong friends, especially Hacivat… 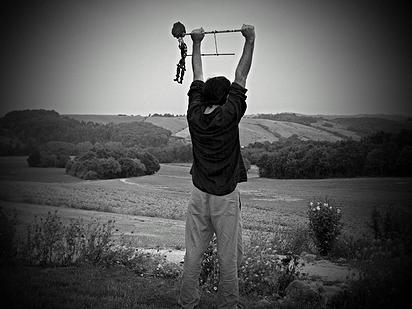 And we give Ürüsan a warm handshake for bringing to life to our joys and our rages. But not only…If the fabric on which Karagöz reflects its colors is called “hayal perdesi”, meaning “the curtain of dreams,” it is not for nothing.

Thanks to the shadow manipulator for giving life to our adult utopias of a better world, but also to the childish dreams we have managed to saved in the innermost recesses of our hearts.