Declaration by Deniz Naki of Amedspor 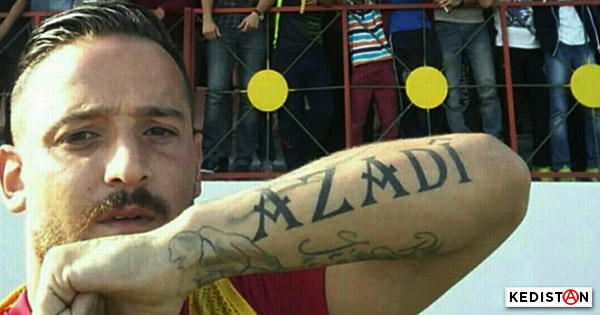 Amedspor soccer player Deniz Naki has been through the mill…

Former member of the FC St Pauli, he had joined the team of Amedspor, a club in Amed (Diyarbakır) that competes in D3 in Turkey. He played with them for two seasons and a half… Until…

In May 2017, Deniz Naki was given a suspended 18 month jail term for “terrorist propaganda” for sharing on social media his criticism of the Turkish army operations in Kurdish towns. A classic, used over and over again for all opponents whoever they may be, intellectuals, artists, academics, civil servants, political men and women, or sportsmen and women… The Turkish professional soccer Disciplinary Board (PFDK – Profesyonel Futbol Disiplin Kurulu) had termed his initiative of “ideological propaganda” contrary to “the spirit of sports”. A decision that can be considered “ideological ” and “contrary to the spirit of sports”,  in its turn… Which is what Naki explains in his  January 31 2018 declaration.

Last January 7, the Kurdish soccerman was shot at from another car as he drove on a highway near his native town of Düren near the Belgian border.

On Tuesday January 30, another decision was handed down: the Turkish Soccer Federation (TFF) imposed a lifetime suspension on Deniz Naki! He will never be allowed to play soccer again in Turkey and he is also fined  58.000 €. The sanctions are motivated by “discrimination” and “ideological propaganda”.

What they will do to shut someone up! When it comes to civil servants, the State fires opponents without salary and often with no pension benefits, plus the loss of their passport. For journalists (there are 164 of them incarcerated in February), it is custody followed by an accusation of terrorism or of terrorist propaganda. For intellectuals, there are threats of all kinds. The regime reigns through division and fear and on the theme of national unity, even in the sectors considered as Kemalist opposition circles…

But Deniz Naki will not keep quiet, on the contrary. This is probably why he was the target of a “trigger” recently sent to Europe.

To the press and to public opinion

I played for the Amedspor team with enthusiasm for two seasons and a half, and gave it all my heart. During this time, I recorded beautiful memories I will never forget for all my life. Outside soccer, with all our heart, we created links with our people. I had days filled with love, respect, joy and happiness, and a big family that offered me all that.

On the road we took with the aim of success, we can’t say we had much success. This always made us sad. As Amedspor, we have been sad, we have laughed and we have blamed ourselves. We have felt and shared all these emotions as part of the Amedspor family.

My life prior to Amedspor was also built on freedom, peace, and the fight for my land.

Knowing that wearing the Amedspor identity required a tough and difficult struggle, an upright posture, I tried to display the right attitude. And I acted with the consciousness that all is not limited to soccer. After Amedspor, I will also go on living with this attitude.

Above everything, I place kindness, beauty, solidarity, peace, the fact of living humanely and patriotism which requires a social sensibility. Because these are the values to which I am tied. They define me, make me who I am. The day I forfeit these values, I will be destroyed.

Because of this posture I have suffered many verbal and physical assaults on soccer fields.

The cowardly armed attempt that targeted me recently in Germany could have taken my life. I know very well that God protected me thanks to the prayers of our people and of people who know me.

I could not stay insensitive to the massacres and confrontations in Sur, Nusaybin, Silvan, Cizre, Silopi, Şırnak. I could not keep silent while people were dying near me and I did not keep silent. As one who hopes for peace, I cannot stay insensitive to the war being conducted in Afrin. Because people are dying. I have called for awareness so that these deaths and this war may stop. I have also reacted against persecution and injustice wherever they may occur in the world, and I will go on doing so. It is my human and legitimate right. But the press allied (to power) in Turkey has once again pulled this into something different, transforming me in the media into a target for a lynching campaign. In those muckracking medias, these slanderous practices have become a tradition.

We must not forget that before being sportspeople, doctors, teachers, artists, administrators, workers, believers or non-believers, from the right or the left, conservatives or liberals etc… we are first and foremost human beings. And it is our responsibility to bear witness to the values of humanity. Although with my club, Amedspor, we terminated the contract by mutual consent, prior to the decision by the Soccer Federation of Turkey, I was given penalties the heaviness of which had never been seen in the history of the Turkish Professional Soccer Disciplinary Board. My licence as a soccer player was rescinded, I was forbiden to play soccer in Turkey, and received fines for exorbitant amounts.

The fact the federation imposed on me the greatest sanction in history demonstrates the level to which it is political and bears prejudice and bias.

I know very well that the decision is political. Your fascist and bloodied political hands have touched soccer like everything else. To tell the truth, I wouldn’t want to be part of a soccer system as soiled as this one. For this reason, your decision has been a relief for me, somehow.

I want it to be known that this type of sanctions and impositions cannot take from me my ambition for peace, freedom and patriotism. I have absolutely no regrets for what I have done, and think of what I could not do.

I have stood upright all my life, I  have defended those who were right, and I have lived with dignity. No matter what the consequences, this attitude will be my life philosophy until I die. If death must come, for this people, for peace, for a life in dignity, let it come.

After all these problematic times, I can no longer return to Amedspor and to my lands. I leave our people to judge all the injustices, illegalities and persecutions.

I extend infinite thanks to the world of Amedspor, our supporters, my soccer companions who were at my side on the bad and the good days, as well as to my friends, the precious ones of our people who, especially after the recent armed attack, called me, supported me, published messages of support everywhere in the world.

I will return some day with the saying “what doesn’t kill you makes you stronger” and we shall live days of peace, serenity and freedom together. We will succeed. This is not a message of goodbye but of existence.

Right next to my identity as a soccer man, I am also, to the tips of my fingers, Seyit Riza’s grandson. I am from Dersim, I am from Amed, I am from KURDISTAN.

With all my respect.

Illustration : Deniz showing off one of his tattoos. “Azadî”, freedom in Kurdish…