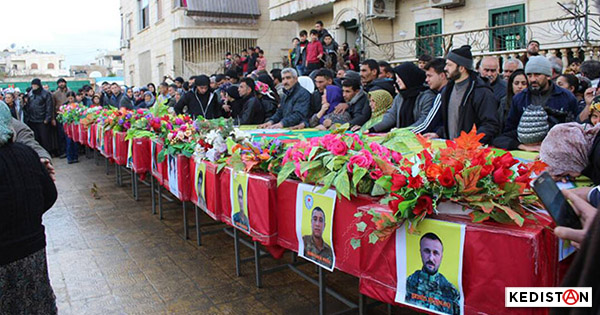 We are in the thirteenth day of the resistance in Efrîn. The Turkish army is using all the modern means and techniques to kill civilians and destroy the villages.

I am still in Chek Maqsûd, the neighborhood of my birth, one that had also demonstrated unexpected resistance for 3 years, against the bands and factions linked to and financed by Turkey, just as did Nour Al Din Aznki and Sultan Mourad. Baasist regime planes had bombed the neighborhood of Chek Maqsûd, a large part of which had been completely destroyed. But it did not yield. This neighborhood’s tormented story deserves to be told. 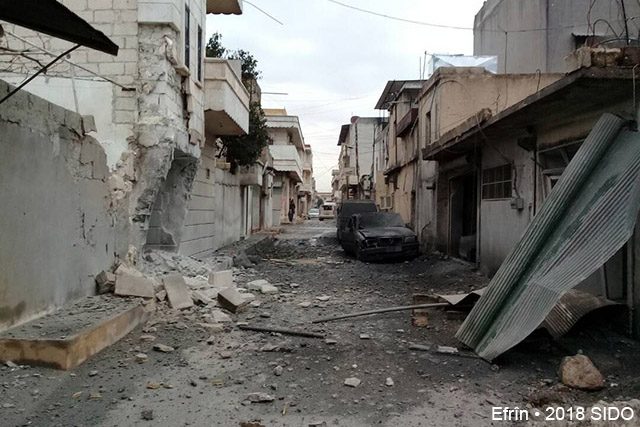 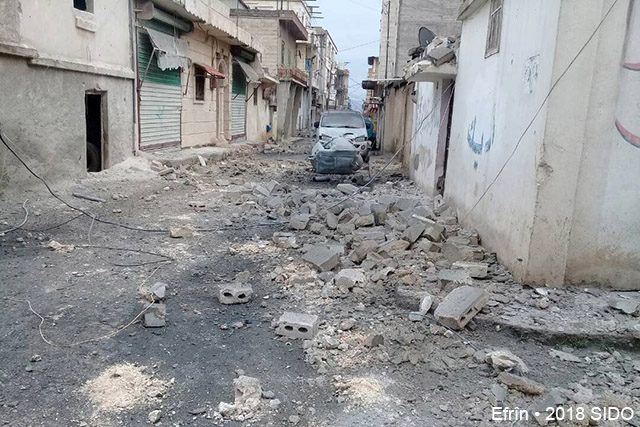 It is in this neighborhood of Aleppo, inhabited mainly by Kurds that the foundations of the Rojava revolution were laid.

Dear friends, in order to express their solidarity with Efrîn, all components of Chek Maqsûd, and of the neighborhoods in Eastern Aleppo: the Kurds, the Arabs, the Turkmen, as well as the Christians, came down into the streets to protest against Erdoğan’s crimes. A solidarity and support tent has been in place for a week now.

We have already set up centres in which to received the gravely wounded. A group of young people has left for Efrîn, in order to fight by the side of the YPG and YPJ. As I write this, five of these young people have fallen martyrs on the fronts. Yesterday, I attended the grandiose ceremony that was held for these martyrs who were buried in Efrîn, in the new cemetery named after Avesta Khabour. Immediately after the ceremony, we visited these families who did not have the possibility of burying their children, to support them. The roads between the neighborhood and Efrîn are still closed down by the regime. 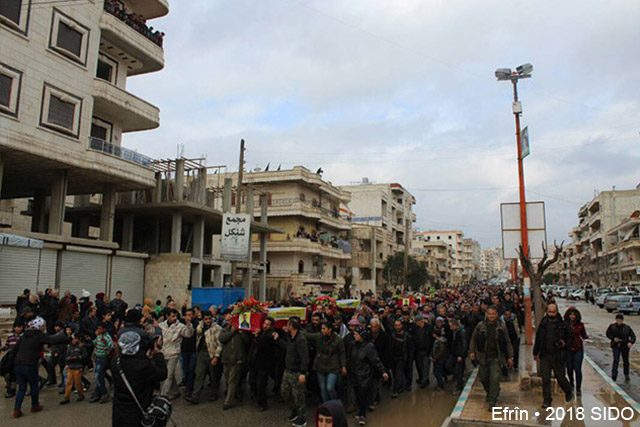 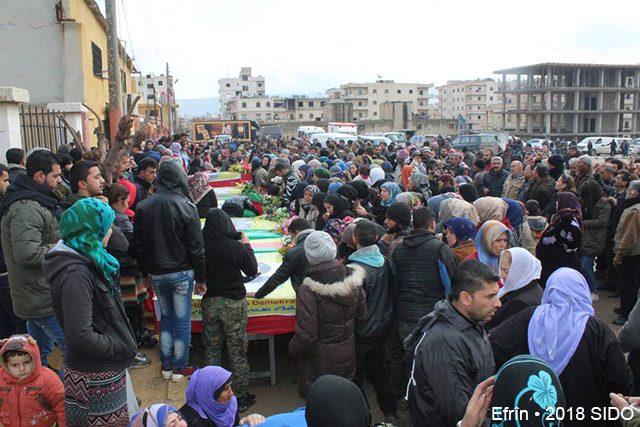 On the day before yesterday I spoke by phone to my brother who is still in the hospital after eleven days. He informed me of the situation. Indeed, the Turkish army targets the civilians, especially the children and the women. They often lose hands, legs, in the bombing raids… 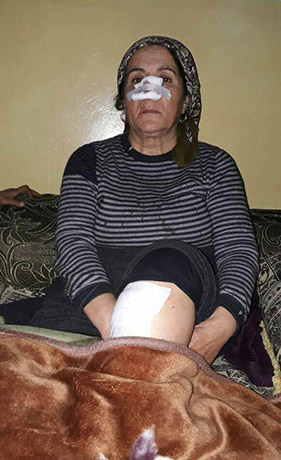 My brother put me in communication with my aunt who was badly wounded. Her house was bombed in Jendêrêsse. My aunt was already ill with a heart condition, and takes care of her paralyzed husband. She had to move downtown. I don’t know what fate awaits her.

Erdoğan, the international coordinator of terrorism and his spiritual father who feeds the Jihadists and collaborates with Al Qayida and Al Nosra were wrong to attack Efrîn and it will cost them dearly. All his plans and dreams will collapse. For Erdoğan does not have the courage to take on Efrîn alone, he has obtained the agreement of Russia and of the regime, as well as the mortal silence of the great international forces. We invite them to explain their attitude concerning the massacres committed by Turkey, a member of NATO.

Erdoğan has no idea what awaits him in Efrîn.

From the first day of resistance, the people have had their say. The mountains of Lêlun, Hawar and Bilbilê expressed their anger. The fighters provided their response. Efrîn will not resemble Jarablosse, nor Al Bab. The town of Arîn Mîrkan will teach Erdoğan and his gangs a historical lesson. Freedom will blossom soon in the land of olives and figs. Efrîn will be victorious as long as its holy land will be watered with the blood of martyrs, and as long as 60 year old mothers will take arms to fight side by side with their children.

Efrîn is the birth place of several civilizations. It is the country of Silava, the first of the YPJ’s martyrs. Efrîn will be a grave for criminals such as Erdoğan. The resistance and victory of Efrîn is in all of humanity’s name. For all of humanity is threatened by terrorism.

The victory of Avesta Khabour’s town will be the key to the solution for Syria.