Feminist Call • Solidarity with the women of Rojava 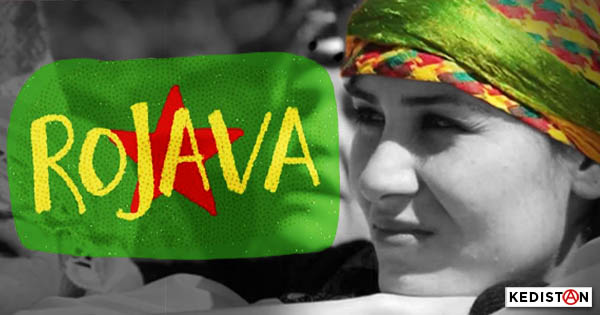 Kedistan joins in and shares this urgent feminist call for Afrin and the women of Rojava. Your turn to share…

SOLIDARITY WITH THE WOMEN OF ROJAVA

The Turkish state is bombing and threatening to destroy Afrin.
This attack kills dozens of civilians, mostly women and children.

Afrin has been a relatively safe area in the region for a long time, and has hosted hundreds of thousands of Arab refugees, particularly from Aleppo.

The people of Rojava are building a new society, in which the different ethnic groups living there organize themselves with their identities in a democratic, feminist and ecological system.

This aggression has a destructive purpose which also threatens the revolution of the women in Rojava, who no longer submit to a patriarchal regime and have the courage to build a society of freedom for themselves and therefore for all.

This is unbearable to Erdogan, who fears contamination in the Middle East and beyond, Rojava is an example of women’s liberation chich undermines the idea of States at the service of nationalism, capitalism and religious extremism, all based on the domination of women.

We demand an immediate halt to the bombing and invasion of Afrin, which doesn’t respect international law.
For this reason we demand a firm position of the UN, the EU and the governments of the countries involved in the coalition: Russia, France, USA, United Kingdom. They must put pressure on Turkey to stop this aggression and make Erdogan withdraw his troops from Syria.

We call on you to spread this call and to raise awareness on the construction of this society which says “Yes, it is possible to live as human beings freely, equally, respectfully of nature, and in order to do so, feminism is an essential means”.

Send your signatures to the following address: kurdish.women.movement@gmail.com

First to have signed:

With the support of the Kedistan webmagazine.