Erdoğan 2018 • Welcome to a war criminal 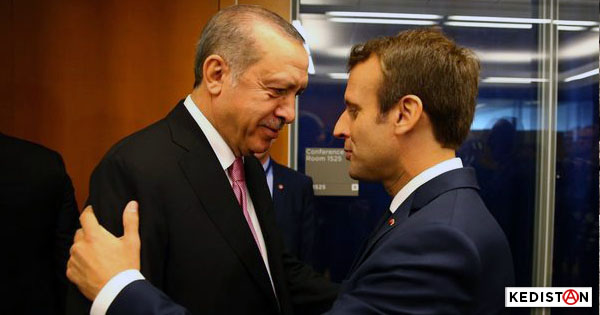 French President Emmanuel Macron decided to streamline the traditional good wishes this year, in order to make room in the January agenda. No doubt so he can find the time to meet up with war criminals with whom he wants to “stay connected”. Erdoğan is one of them.

In fact, it is in the name of pragmatism and of avoiding rifts that he will greet Reis Erdoğan, on January 5. Did the Reis invite himself unexpectedly following his African tour?

Whatever the case may be, the agenda for their talks seems well established with “a partner who is crucial on a number of issues, particularly in the migratory crisis and the fight against terrorism”.

As a reminder, France is also pursuit of arms sales, a specialty of Erdoğan’s son-in-law. And  the French construction and public works sector is a heavy contributor to the Turkey’s “concrete” achievements for 2023.

So while the French President will be noting that “Turkey has objectively drifted away from the European Union these past few months, with worrisome developments that cannot remain inconsequential for the customs union, for instance“, we can bet General Le Drian, the Foreign Affairs minister, will be in on the meetings.

Erdoğan will undoubtedly reassure French authorities concerning background rumors concerning patented killers ready to take on Turkey’s enemies in Europe. Close to the anniversary of the assassination in Paris of three Kurdish militants on January 9 2013, now a cold case file, the French administration will undoubtedly appreciate the reassurances.

It is highly unlikely that the talks will deal with political hostages in Turkey. The presidential communication will say they did, no doubt…Let’s wait and see how this translates into real interventions.

Pragmatism will call for Turkey expressing reassurances concerning the holding back of migrants, and assurances by Macron that he will carry forward Europe’s commitments to Turkey in this area, now that Merkel is experiencing momentary political difficulties related to this issue.

Since the topic will lend itself to such, pleasanteries concerning the Turkish candidacy to the European Union will undoubtedly be exchanged.

But who will dare bring up the content of the latest decree edicted by the Turkish regime in December, the one promising immunity to assassins who invoke anti-terrorism as their alibi? To do so would be to accuse Erdoğan directly, since, although no mere civilian,  this decree provides after the fact immunity both for him and his genocidal army.

Thus, all the massacres he has covered or ordered these past few years will be erased thanks to jurisprudence following the blessed attempted coup d’état. President Macron, who knows a thing or two about presidential decrees,  probably won’t have much to say on this topic.

Will the French President argue in favor of the presence of a delegation representing the Northern Syria Federation at the upcoming peace talks? Or will mutual congratulations end on the shared opinion concerning the American decision for a de facto recognition of Jerusalem as the Israeli capital?

He needs recognition, via a press conference, as an indispensable “partner” at the international level. And France, as a financial partner, needs Erdoğan’s  new-found influence in Africa… If you’ll pass the Sahel, I mean, the salt, I’ll pass the…

It will be said assassins with fresh blood on their hands will always be welcome in Paris, as long as they share common liberal economic outlooks and filter out migrants. In this regard, the continuity with the Hollande government is evident.

Plus, if a few contracts can be seen to stimulate growth…The ex-Socialist Breton General will see to it.

As stated in an AFP release: “This is the first visit to France of the Turkish President since the failed putsch of July 15 2016 and the election of Emmanuel Macron last May.” New Year wishes marked by ignominy.

A visit announced only a few days in advance, allowing no time for the expression of anything but pathetic anger.