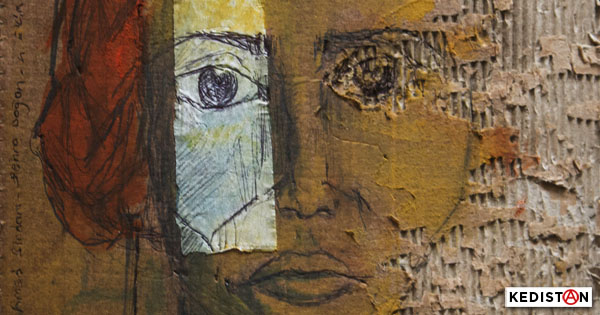 Even if it was to be expected,  we experienced a mix of sadness and anger  when we learned  Zehra Doğan’s clandestine prison works  were confiscated. Since then, her artistic struggle continues.

Zehra resists within the four stone walls of the high-security jail for women in   Diyarbakır (Amed), in which she was thrown in June 2017.

She resists by continuing to draw, paint, write alongside her political co-detainees.

Drawing, painting, despite the bans, despite the lack of material. With her talent, intelligence and rage for life, she transforms every available source into a work of art. She recycles reality and transforms confinement into creativity.

Luckily, a few of the works thus created were saved before the raid, as described by a recently liberated co-detainee. They will soon be added to the exhibition that is starting to circulate in Europe.

More than ever, in these harsh times, Zehra needs support, visibility and protection, even from a distance.

The Turkish penitentiary system decided to react and to hit where it would hurt, by confiscating and destroying works considered as “garbage”. It knows that this blind and brutal approach is a form of psychological torture. Having lived for two years as a journalist with death all around her in towns under siege, Zehra has lived through worse times, no doubt, and is strong enough not to break. She demonstrates this to all those who surround her, near or far. But support must be total.

We call on you to act, not to leave Zehra facing the bureaucracy alone. Her co-detainees support her, let’s form the second circle. Artists, journalists, intellectuals, you with possibilities to spread information around you and the means to do so, mobilize with us! All of you who will read these lines, your pen can become a defensive weapon…

Send Zehra your written support. To this end, we will offer you new models of letters in Turkish, along with these.

And sending her one of these “red women” would be a plus, a thumb to the nose of the prison universe. We have postcards at your disposal for writing worshops… 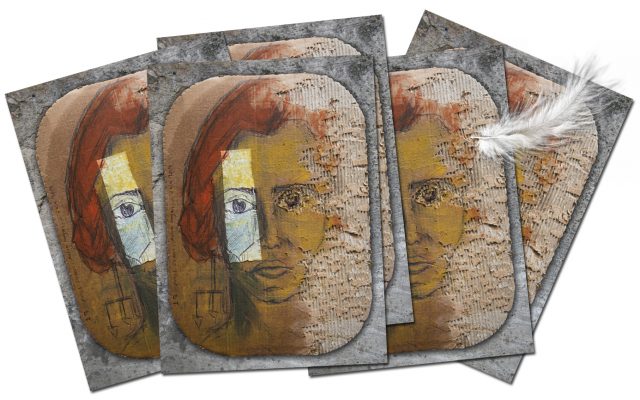 Translation : Dear Zehra, You are not alone. We are proud of your work and celebrate your courage. Your voice is heard across the world and we will go on calling for your liberation. In friendship.

Last but not least, organize an exhibition of the reproductions of Zehra’s work, allow her works to live outside prison.

And read this testimony, help in spreading the call for the liberation of a young Kurdish journalist and artist who has no business being in jail, as is the case for all her companions, political hostages of the regime. 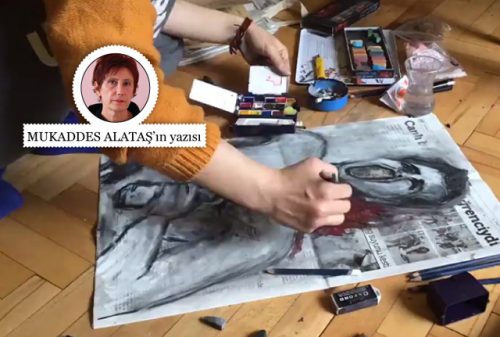 Mukaddes Alataş, defendor of human rights, activist for women’s rights, arrested in May 2017, was incarcerated in the same quarters as Zehra. In an article published on Gazete Karinca she describes how the works of Zehra Doğan, her friend and co-detainee who had continued drawing despite the difficulties, were confiscated in October. The battle of wills has continued since… Mukaddes was let out on provisional freedom, awaiting sentencing.

Zehra’s drawings were “arrested in jail”

The door had opened out to the yard. All eyes were turned toward this door. The one who walked in was like a woman in a painting; thick black hair, eyebrows and eyes. “I came too,” she said, smiling.

We surrounded her, as we do with all new arrivals. We started to talk. Then we helped her find her bearings.  Came the moment for the jailhouse joke. The play, the comedians, everything was improvised. The play began. We were curious to see how Zehra would react. Our actresses’ performances were very credible. Zehra was following. She was hesitant. At one point, she leaned over gently and whispered in my ear: “This wouldn’t be a prison joke, by any chance?” We all broke out laughing.

On the following days, seeing how everything seemed “normal” to Zehra, I talked to her about that. She laughed and answered: “While I was working on-site as a journalist, I witnessed so many abnormal things that all this strikes me as perfectly normal.”

Zehra… A painter, a journalist, a keça Kurdan [Kurdish girl]

She had painted on the carboard from a milk carton. Oh boy! This was such a huge problem. “How did this carboard make its way inside?” Cardboard and drawing were thus “arrested”! This “warranted an investigation“, it was urgent “to investigate right away“.

At first, Zehra drew on newspaper with a ballpoint. Because drawing materials were forbidden inside. Shortly thereafter, she moved on to the production of her own material. She started creating green with parsley, yellow with turmeric. Would she be able to reproduce the color brown with coffee grounds? I must say that, sometimes, her mixtures kept us from sleeping. Try to imagine the oily smell of tomato sauce, once removed from the dishes, and spread on newspaper. Sometimes, she managed to produce truly beautiful colors. For example, by leaching the dye from my hair…After making a paintbrush out of a bird feather, paint out of fruit and vegetable, and canvas out of newspaper, Zehra moved on to “chainwork”.

We hung Zehra’s newspaper drawings on the walls of the courtyard. We did so in order to be photographed in front of them and to send the photos outside. Our painter had also wanted to be photographed in front of her work, while drawing on newspaper with her birdwing paintbrush. When we requested this shot from the prison photographer, we learned our painter had committed another “crime”. “As if if wasn’t enough that she was drawing inside, photographing all this besides, that was simply impossible”. And there goes another incident warranting an investigation. And yet, we had demonstrated our enthusiasm, “No, you must put that drawing, that one, a bit higher!”… Thirty women, giving advice, is not a little thing…

Zehra was never idle. She has written the stories of the women’s lives, she has given drawing lessons, she taught drawing to everyone, whether they knew how to hold a pencil or not. I was also one of her pupils.

She continued to draw and to set her work aside. Suddenly, there was a raid in the middle of the night. The whole administration team entered the quarter in a rage. They ransacked through all our things, hitting with their mallets everywhere, left and right. Who knows, we might have dug a tunnel! When the raid was over, they had found “proof of the crime”. They had in their hands the drawings Zehra had done on newspaper. They also had a few books they had grabbed, just in case. They left. We stayed there, watching them go. Cleanup took hours. And after seeing her drawings disappear, Zehra’s eyes were filled with tears.

“They were my best drawings. Producing the paints was so hard. And the hair, I’d had so much trouble getting those colors. ”

All of us were cursing.

We had been so happy when we had leached the dye from my hair to give it to the women in the drawings. And they had taken away those women with red hair. They had maybe thrown them into the garbage can a bit further down…

Zehra is very inventive and hasn’t thrown in the towel. She will go on writing and drawing. And the marks she made on my body before my liberation are still there.

And don’t forget that a book done in collaboration with Zehra is available in French. You can order it from Kedistan.