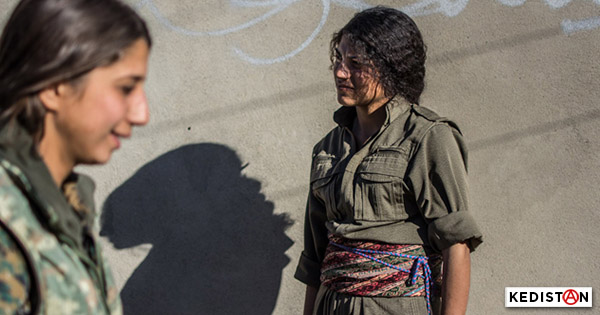 We publish this text built of testimonials collected in the district of Sinjar, liberated from ISIS control at the end of 2015. 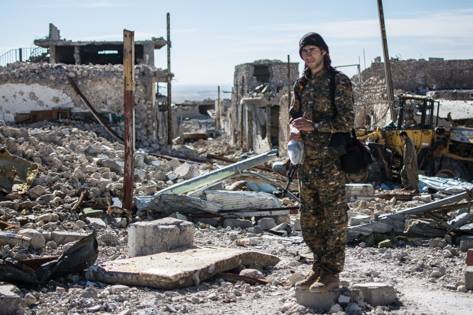 Yazidi fighter in the ruined town of Sinjar
photo ©PYB

The capture by ISIS of these territories largely occupied by Yazidis had led to killings, rapes and abduction of women, while the exodus of part of the populations was facilitated by PKK fighters who had come to their rescue following their appeal for help. The attitude of the Perhmergas, Iraki Kurdish troops, was subject to controversy in August 2014, during massacres commited by ISIS.

Since then, the Yazidis and their political and religious leaders are attempting both to have their rights acknowledged and to objtain the liberation of their women and children, still in the hands of ISIS.

If they have joined forces with other fighters working at liberating and protection the region, and alongside the forces of Rojava, integration and political coexistence are not easy, given the disputes of 2014 and earlier.

The matter is a recurring one between Iraki and Syrian Kurdish movements.

So why publish a text that will rub salt into the wound instead of another describing the speech at the UN by a Yazidi representative seeking the recognition of a genocide?

Simply because the ongoing process  of fragile political construction in Rojava in a context of permanent war that must take into account the exodus of populations with ongoing disputes does not allow for the avoidance of problems and difficulties.

With its short testimonials, already dated, the authors of this text are aware of providing a Kurdish version to the “disagreements”.

The text is a tiny stone brought to a debate that deserves attention, if only so as not to forget the killings of 2014, and to talk about the future of a raped minority relearning how to survive. The article was written in 2015.

And in order to provide other viewpoints on the matter for once, you will find here a series of useful links (some in French, some in English).

Were the Yazidis abandonned?

Sinjar city was recaptured from ISIS last November 13 by the Kurdish forces (2015). Despite the liberation of the town in Northern Irak, the Yazidi population fears for its future. Indeed, this minority community is caught in the political conflicts opposing the various Kurdish movements and entities.

Sinjar City is a field of ruins. The town, liberated last November 13 by the Kurdish forces, testifies to the hand to hand combats led for months against ISIS. Streets are barred by heaps of rubble. Black smoke still streams from burning houses. Trucks move back and forth attempting to salvage what can still be saved. Furniture, blankets, fridges, mementos hang from them. Some of the former inhabitants are returning for the first time to the town after a year away. They take the measure of the devastation caused by war and by the occupation by ISIS since August 2014. “Here stood my brother’s house, now there is nothing left”,  an afflicted man calls out, showing a building shattered into remnants of concrete blocks. “It was bombed during the offensive, mine is next door”. An adjoining wall was carried away by the strike.

At the heart of this sinister theater are progressively found numerous traces of the Islamic State: walls are covered with Djihadist graffiti.  “Mudjahidins, be patient” one reads. A mosque, littered with Corans in ashes gives off a smell of sulphur all the way to the street. A still-identifiable corpse decomposes in the sun on a pile of stones. Some of the houses brim with tunnels, mines and various booby traps, making their reclaiming long and dangerous. “Some of the tunnels are all of 100m long. They used them to protect themselves from the air strikes, to flee during the offensives or to put together their homemade bombs” explains Kourtay, communication officer for the Kurdistan Workers’ Party (PKK) in Shengal. 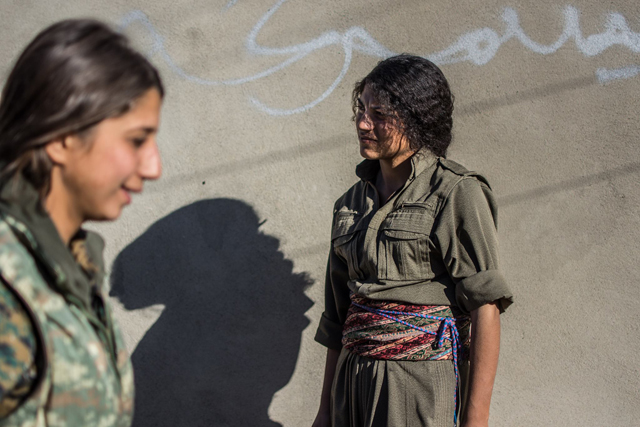 Beritan (on the right) is a Kurdish fighter from Rojava, fighting alongside the Yazidis in Sinjar
photo ©PYB

The Yazidis all join one camp or another. Some out of conviction, others by default. Bereft of financial, political and military resources required for independence, this minority community of Northern Irak has been dragged into a political conflict that exceeds its capabilities.

Cohabitation is difficult with the peshmergas. Indeed, the Yazidis who make up half of the army stationed in the district of Sinjar, fight alongside Kurds who are mostly Sunnis.

As their religion does not belong to that of “the book”, some rigorist Muslims among the perhmergas call them “devil worshippers”.

For their part, the Yazidis remember that Muslims have been their main oppressors throughout history, all ethnic groups combined. Despite their alliance against the men of ISIS, this ancien quarrel is still very much alive.

Last November 20 in the village of Sowlakh, peshmergas, Yazidis and Kurds were charged with evacuating the inhabitants, Sunni Arabs, towards the interior of Kurdistan. For the Yazdis, these people who had lived for some fifteen months under ISIS had supported the Djihadists in the massacre of their population. From the Kurds’ point of view, if was a question of helping civilians, “brother” Muslims. The disagreement among the perhmergas degenerated into a shoot-out.

The skirmish caused several dead and wounded on both sides.

“It was a misunderstanding between brothers. It will have no further impact, the problem was resolved. The fighers involved are now side by side on a checkpoint” explains Qassim Shesho, commander in chief of the peshmerga forces in the region. According to the local population, similar incidents have happened before. 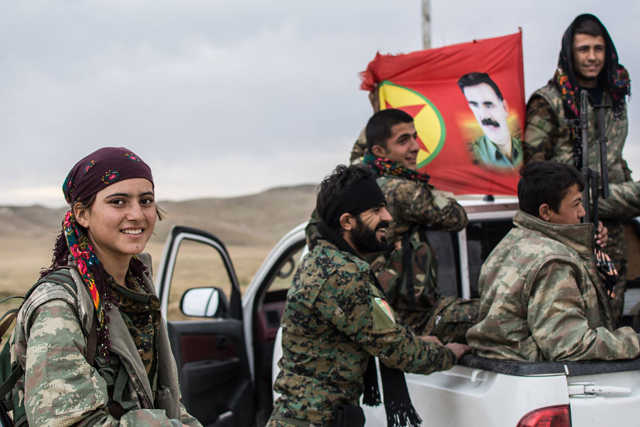 According to the testimony of several of the town’s inhabitants, on the eve of the massacre of August 3 2014, the peshmergas took advantage of the night for a pullback from their positions in the district of Sinjar. More numerous, but less well armed, they decided to pull back without warning the local population. Leaving behind their material as well as  3000 Yazidis who worked as security agents for the PDK. The feeling of treason has remained very strong in the population of Sinjar. Qasim Shesho considers that his predecessor, in charge at the time of the offensive, was nothing but a “coward”.

“I was there on August 3. I didn’t see any ISIS fighters, not even a vehicle. I saw the perhmergas fleeing and abandoning their material, we recuperated their weapons and attempted to resist. They did not fight, I think their departure was planned. The Kurds were pulling back, the Yazidis stayed on to fight. In my opinion, they wanted to let them get killed” says a former PDK security agent.

Not all the Kurds abandoned the Yazidis to their sinister fate.

The men of the PKK arrived as reinforcement to fight against the Djihadists. Thanks to their intervention, a humanitarian corridor was put in place to break the encirclement of the populations taking refuge on the mountain.  Agit Kalani, commander among the HPG forces, explains the reason for their coming: “We are here for two reasons, to liberate Sinjar and to protect its population. It is thanks to our intervention that the 3000 Yazidis abandoned by the PDK could be saved and it’s with the Yazidis’ cooperation that we were able to open the corridor allowing the refugees to survive the siege”. An important part of the Yazidis are very grateful for the role played by the PKK in the region. “My three daughters have been fighting in the YBS for the past fifteen months. The men and the women of the PKK came to help us and, if some day, they need our help somewhere else, my daughters will go and fight by their side” explains Saeed Hassan, living in the Sairdashty refugee camp. However, for others, the gratitude is more mitigated: “We thanks the PKK for helping us in defending our people and our land. But now, they want to stay, we are very grateful, but we do not want to be under their control”, says the former PDK security agent.

Even if the PKK enjoy almost-unanimous gratitude within the Yazidi community, a great number of them still fight among the Peshmergas. 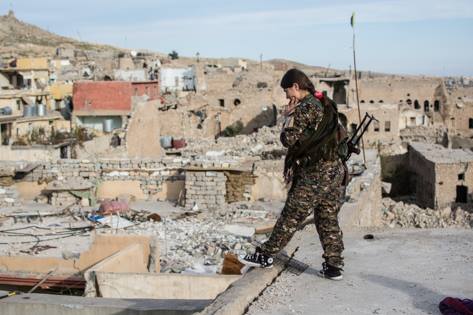 According to Qasim Shesho “The Yazidis who like the PKK come from poor families and have no education. Even if for some of them trust was broken with the Kurds, it will come back. Only the Peshmergas put up with and protect the Yazidis. We have trouble trusting the Kurds but President Barzani is the only one who will help us”. However it should be recalled that Qasim Shesho leader of the “Êzidîxan” force (HPE), lost part of his legitimacy in front of his men, and his status as a commander was questioned. He stayed in command thanks to the active support of the PDK. The rift even affects the Yazidi leader’s family. His nephew, Heydar Shesho, paid the price of his opposition to the PDK. Barzani’s men jailed him for some twenty days because of his symathy for the UPK and the PKK.

If many Yazidis fight within the ranks of the Pershmergas, it is more a question of pragmatism than of political affinity. Indeed, contrary to the PKK, still considered a terrorist organization by many Occidental countries including France, the PDK has access to important resources. From a military point of view, the men from the regional government of Kurdistan have more men, more equipement but, most of all, more money. These funds will not only be useful for the maintenance of the armed forces, they will also be of great use to the Yazidis for the reconstruction of their devastated villages and town in Sinjar.

Despite their enrollment with the peshmergas, many Yazidis would like to have the means to protect themselves in order to avoid new occurrences like those of August 3rd. Commander Agit Kalani of the PKK shares this opinion : “It would be good for the Yazidis if they had a certain autonomy within Iraki Kurdistan”.

Many Yazidis fighters have joined the ranks of the PKK, of the peshmergas or of the Shingal alliance and continue to fight for a better future. “We are here to protect our close ones and our lands after what happened last year” says Silava, a young fighter within the YBS. “We are stronger all the time but we need military and logistical support. ISIS has efficient techniques, lots of fighters and heavy weapons” one of her friends explains.

Armed conflicts are moving away from the outskirts of Shengal. Misery and apprehension concerning the Yazidis’ future will be harder to dislodge. “I hope to obtain a national and international protection. Then, I’ll be able to think of a future for my family” explains a Yazidi refugee. “Only aid from outside the country can bring us comfort. We want military support and an independent Yazidi consul to represent our community”.