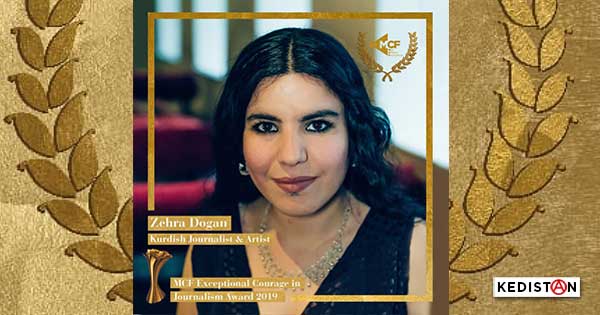 Last year, in this same time period, Zehra Doğan received a prize for “courage in journalism” in the United States. This time, she was rewarded in Lebanon with the “Exceptional Courage in Journalism Award”, given each year by the May Chidiac Foundation (MCF). 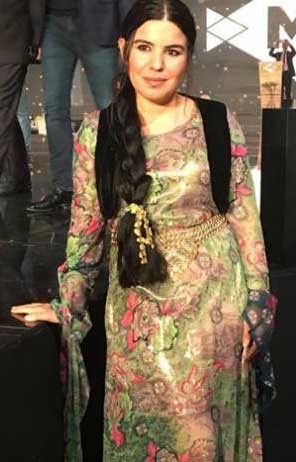 The award was given on October 11 2019 at the Seaside Arena in Beirut. At the opening of the ceremony, the President of the Foundation, May Chidiac, underlined the fact that human rights were regressing all over the planet and that freedom of the press was under severe attack in America, in Asia and in Africa. She mentioned that violations to freedom of expression also existed in Lebanon and that the media are not free to act independently. Noting that offences against freedom of expression and the media were at a record high in Turkey, she added: “Turkey has become a prison for journalists. Those who are not in jail can no longer write. And being kept from informing freely is already like being in jail. But some journalists resist against these conditions, and Zehra is one of them.”

“I thank you for this prize.

While I was in jail with a friend, who had been incarcerated for 22 years and who had visited Beirut twenty-five years ago prior to her incarceration, we used to says “one day, we will watch the sunset in Beirut while listening to Feyruz.” I came out of jail, my friend is still inside.

Turkey is a prison. The entire country is a prison. Hundreds of journalists, artists, political figures, thousands of champions of human rights, are in jail. Turkey is one of the worst countries in matters of freedom of the press. No later than today, journalist friends of ours are being held in custody. Why? For having published information on the assault against Rojava.

There is war in Rojava. In Rojava, people are being massacred. Children are being bombed, and killed. Turkey is attacking Rojava.

Today, I saw in the streets that people in Beirut were demonstrating their support for Rojava. There were also statements from politicians condemning the attack against Rojava. This pleased the Kurds very much. As Kurdish people, we have been under attack for years. But remember also that we have been resisting against this for years. We resisted yesterday, we go on resisting today.

Receiving a prize at such a time made me think deeply. This prize does not belong to me. I cannot receive it in my name. I’m accepting this prize in the name of the Peoples of Rojava and I dedicate it to my journalist colleagues who are searching for real information in Rojava at this very moment.”