To arms, citizens! Light the fires! 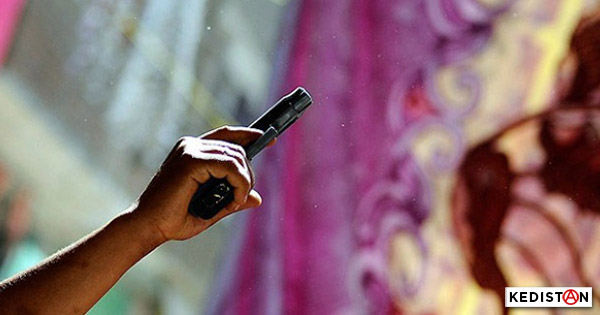 Is linking two facts, two events, acts or declarations, following the publication at the tail end of 2017 of another criminal decree in Turkey, a matter of fanning the flames?

This propaganda video by bigoted ultra-nationalists is being pulled out again today although it was filmed six months ago. At a weapons’ fair, one couldn’t expect anything other than a warlike demonstration.

– There are shooting ranges, spaces adapted to the purpose and authorized by the gendarmerie, the police. They’re building venues. Folks now are getting ready for something to happen in this country. We are aware of it.

– Following July 15, both the number of groups, of tactical groups, and the number of weapons began to increase. Our folks started arming themselves. And our State, may Allah protect it, supports [this]. Because on July 15, we were caught off-guard, suddenly…For example, we didn’t have these (he shows his weapon)… I had one, so did my buddies, but others didn’t have any. What did they do? They put their body into the fight. They wove their body armor out of their own flesh. So, it [the State] said: “We have to show something, give something to our people.” If Allah wills it, if these rifled barrelled firearms, military weapons (manufactured in-country) are available for purchase in the country, we could use our own weapon.

Excerpt from an 18-minute reportage on Ahsen TV (an islamist web-video chain in existence since the end of 2014), filmed at the weapons fair in Istanbul and first aired on April 23 2017. The entire reportage is titled “Topunuz gelin”. A Turkish expression that translates, more or less, as “Come on all, if you’ve got b…”

Not wishing to contribute to their audience figures, we spare you the link. You can find it easily by its title, should you wish to see it.

The reportage closes on the fine words of the presenter (17:43) “As the Reis (Erdoğan) says, PYD, PKK, ISIS, come on, all of you!” At which words, the men aim their rifles toward the camera.

AKP means AK Parti and ak in Turkish : white, clean. Following July 15 2016, organizations started appearing on social media, with names such as the “AKmilisler” (AK militias), “AKgençlik” (AK youth). These lasts were added to “Osmanlı Ocakları” (Ottoman Homes) and the “Osmanlı Ocakları 1453” born of a scission, both groups being informal AKP organizations. Through their windows on social media, all these groups have published calls to arms under the hashtag “#AKsilahlanma” “AKarmament”. The latest decree matches up wonderfully with these appeals.

The comments are not those of a sales representative or of member of some weapons lobby. They are those of the majority wing of the base of the AKP/MHP nebula. They echo all the justifications and advice offered at the time on necessary securing against terrorism of pro-regime militants, cadres, and even ministers…They follow the notion of popular defence against infiltrated terrorism that saw the great surge of crowds demonstrating in July 2016, and on the idea stated in many of Erdoğan’s speeches, saying more or less that “the small shop owner is our best ally and defendor”. In saying that, he wasn’t talking about savings or neighborhood businesses…

A number of journalists and politicians have drawn attention to this wave of civilian weaponry. For example, on November 23 2016, in Cumhuriyet, Aydın Engin wrote: “The AKP’s base is arming itself without scruples.”

He also drew attention to the fact no political authority was denying or condemning this situation and reminded the reader that the President of the Republic’s advisor, Şeref Malkoç had declared earlier that “the road will be opened to the bearing of arms with a permit, in order to counteract coups d’état.”

The author noted that the road had been covered and it followed in the words of the authorities. Melih Gökçek, then Mayor of Ankara, in a TV program: “There has been an extraordinary amount of arming. They buy pump-action shotguns and keep them in their homes. If tomorrow, you attempted a coup d’état with military firearms and Kalash, these people would face off with you with their shotguns. They have finally understood. The world is trying to ensnare us. Must they wait for a coup d’état and say “I’ll wait for them to come and kill me?”

In his article Aydın Engin specified that, “The way in which this ‘extraordinary amount of arming’ was taking place was expressed without varnish, with no effort at censorship by the prefects of Rize and Edirne.

Indeed the prefect of Rize, Erdoğan Bektaş, (formerly the prefect of Manisa), had described this doggedness in these terms: “In Rize, in three months, I issued as many permits for the the bearing of arms as I had issued in two years in Manisa.”

As for Edirne, the prefecture applied a “support” system as a “controlling mechanism”. This involved demanding the permit applicant a donation of up to 10 000 Turkish lira (2200€ at the current rate) for foundations carefully selected by the prefecture. Those who could pay left the premises with a permit in their pocket.

Concerned by the “situation in which Erdogan and his team are pushing the country and the eventual explosion of a mass movement” the author reminded us in his article of “the chanting that rose from the AKP strongholds during the Gezi resistance, “Open the way, we will come! We will crush Gezi!” and Erdogan’s refrain at the time “I have trouble holding back the 50%”. A year ago, he was already raising THE question: “What is the aim of these efforts at arming people? AGAINST WHOM will the weapons be used?”

The very notion that the State apparatus needs backing up by accomplices and occult militias is present in the mind of every fascistic leaning ideologue. And after his having fought so much against the political power of Turkish military forces that were practically constitutional at the time, it would be showing poor knowledge of the Turkish President to believe he trusts his chiefs of staff entirely. That this army be present in Syria, that it assassinate in the East, and that it participate in NATO manœuvres poses no problem, even for the official Kemalist “opponent”. But that it be entirely trustworthy in the eyes of the Reis, after so many ancient plots and new purges, is another matter.

Having constituted through marriage within the family clan something close to a high level weapons sector, and linking research and the weapons industry directly to the presidency in the latest decree, can only be interpreted in light of the upcoming 2018 military budget, presently being voted by the Turkish Parliament. It is a war budget. This is how it is denounced by Garo Paylan, HDP Deputy, in a recent interview on Gazete Duvar.

The army is no longer a sphere of political power, its superior officers all being on ejectable seats, at the Caliph’s whim. The regime uses the army, more than it rests on it.

The fate reserved to the police is also known, both the increase of manpower with simultaneous ongoing purges. During 2017, there has been a whole controversy over recruiting, the existence or not of exams, the types of contracts. The police is no longer a force for public safety, but openly an all-out “anti-terrorist” force of repression, on which the regime relies as much as it does on the courts. Parts of the police contingents have roots in supplementary forces with poorly defined contours.

A State appartus fragilized and divided by succeeding purges thus rests on the populist doctrine of “the enemy within and the Nation One and Indivisible” distilled at all levels, and on the its hand-outs, as well as on bureaucratic submissiveness, more than on controllable constitutional powers. One need only look at the fate of investigations following misconduct and crimes to be convinced of this. A supplementary germ of fascism.

Does this mean Erdoğan is a dictator with absolute and uncontrollable power?

His ongoing use of the institutional machinery might seem to contradict such an affirmation. And an examination of the rifts within the AKP itself would be interesting, as would a look at the ongoing counterweight exerted by the Turkish ex-social democratic official opposition.

The alliance/absorption with the ultra-nationalists, as absolute guarantee of stepping into Atatürk’s outfit, even in the uniform of a new Caliph, requires some respect for conventions.

Erdoğan’s dialectic calls for preparing a war in order to win elections he would gladly do without. Since 2015, we will have understood as much. In doing so, he sets the stage for fascism as well as for radical islamism, navigating between the two as he does, a solid bigoted nationalistic populist. So far, this dialectic has served him well.

The first snag occurred with the extremely narrow victory of the referendum, soon forgotten due to “external interventions” and speeches about ” meddling and false accusations against democracy in Turkey”. But the thought that constitutional reform and presidentialization could be useful to others gains traction, especially since behind the apparent economic success, financial overheating caused a drop in the Turkish lira’s value, and hidden corruption is coming to the fore again with the affairs on trial in the United States.

Enough to give ideas to old warhorses and inspire others with thoughts that – should the steering wheel change hands, one should be ready for it, especially since a majority of the only democratic opposition is in prison, and the “traditional” one, tired by its last march.

Yet the fire of resistances still burns, despite the fear, the demoralization and the extreme polarization…

Time, therefore, for the regime to fan the flames in order to realize the 2023 prophecy.