Zehra Doğan, One Year into the Ban on JINHA 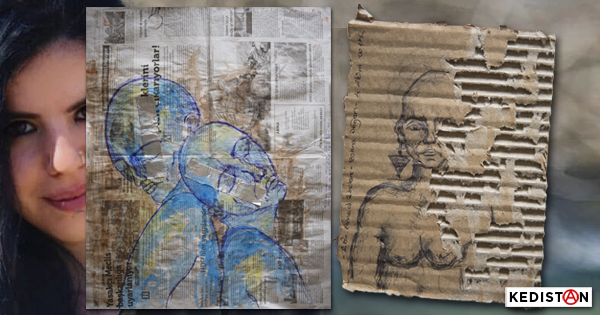 In March 2012, Zehra Doğan became one of the co-founders of JINHA, the all-female press agency banned and shut down since by Turkish State decree in October 2016.

Sadık Çelik, a Kedistan editor, met her in Istanbul in 2013 during the Gezi events. So it was only natural that he interview Zehra about JINHA for our magazine, in the beginning of 2016.

Our deep friendship with Zehra was born of this human and professional relationship. Our commitment to inform on what she is subjected to as a woman, a Kurd, a journalist and an artist needs no further justification.

We have not stopped calling for support in every possible form, ever since the 141 days of her incarceration at Mardin in 2016 while awaiting trial, until her new and definitive imprisonment in June 2017, and throughout the period of undertainty in between during which she did not cease painting and drawing in complicated circumstances, as told in the book “Les yeux grand ouverts” (Eyes Wide Open – Book in French).

The decree banning JINHA is now one year old. Zehra commemorated this first anniversary in her fashion. From her prison in Amed, she managed to exfiltrate the drawings she goes on producing with the means at hand. She sends them through journalist friends who published a few of them today in media of democratic opposition.

The authorities of the high security women’s prison in Diyarbakır have denied Zehra access to her painting materials. This measure does not single her out specifically; it covers all materials that might be used by women prisoners for so-called leisure activities . In ubuesque fashion, this even includes nature since the ban includes plants and, beyond, even the representation of “natural landscapes” in photos.

Zehra mentions this in her letters:

I recycle everything I can

“Since the prison administration wouldn’t give me my material, I had to find alternatives. And I realized that I had everything on hand. I use wrappers, garbage and food. I produce the colors from natural sources. For example, olives provide me with black, tomato paste gives me red… I crush parsley for green… turmeric provides yellow. There is tea, coffee…and honey for glue. For paper, we are allowed notebooks and writing paper. So I use newspapers, but also all kinds of wrappings. The cardboard from boxes of cookies, the aluminum foil on containers…For special effects, I also use the aluminum paper from packs of cigarettes.”

Obviously, not everyone understands using garbage and transforming it into Art…

In September, Zehra said in one of her letters: “A few days ago, I wanted to give my father a drawing I had done on salvaged cardboard. The guard didn’t give it to him, saying I had used aluminum foil from a pack of cigarettes on my drawing. What’s more, the guard said to me: “What is that? A drawing or garbage?” I had glued to the wall the drawings I had done and taken my picture with them. But they didn’t give him that photo either, claiming it was forbidden.”

“At first, I painted with my fingers, I had no paint brushes. Then I suddenly thought I could make one. I recovered bird feathers that had fallen in the yard. I bunched them together, like a miniature broom, and tied them securely with string. Then, I inserted the whole thing at the end of an empty Bic ballpoint and heated it with a lighter to secure it. And voilà! Now I have a paintbrush!”

Zehra isn’t idle in prison. Far from it! Apart from the regular collective sessions of reading, discussion and further study, she reads a lot on her own: “I focus on the Middle East. I would like to further my knowledge of history, culture and regional mythology,” she writes. “I set aside 4 hours every day with one of my co-detainees to write a novel based on her life story. I draw and I paint whenever I can. And I’ve also started giving drawing classes to my friends here. In a way, I socialize art in my fashion. They love to draw. Soon, I’ll be able to teach them how to make a paintbrush out of bird feathers.”

She adds : “I wouldn’t like you to imagine a sad-sack withdrawn Zehra, wasting her time. I write to tell you everything I do here, so that when you hear and pronounce the name Zehra, you picture a woman with a strong morale and hope, someone who is strong and upright.”

Zehra’s letters are also filled with philosophical considerations, notably on imprisonment and resistance. We will soon publish some excerpts but most of all, we will present them in readings or with sound illustrations during the exhibitions of her escaped works.

With these 8 new escaped works (which we hope to add to the European exhibition as soon as possible), a short story presently being translated, and the latest reportage she did with one of her co-detainees (and not the least among them, Sara Aktaş, poet and Kurdish activist), Zehra demonstrates, yet again, that neither journalism nor art can be muzzled, even behind bars. 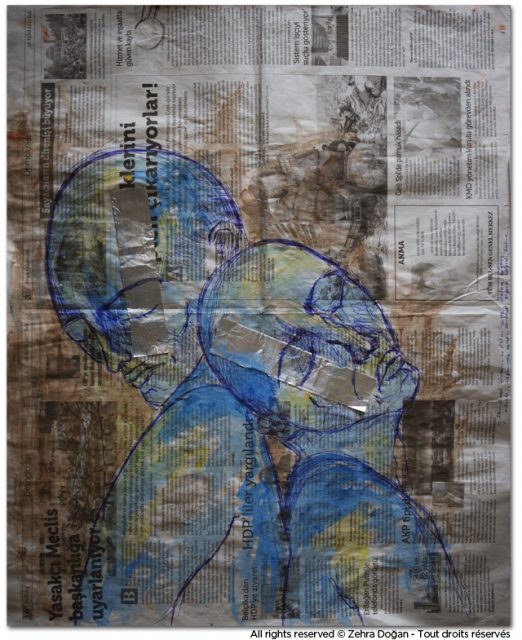