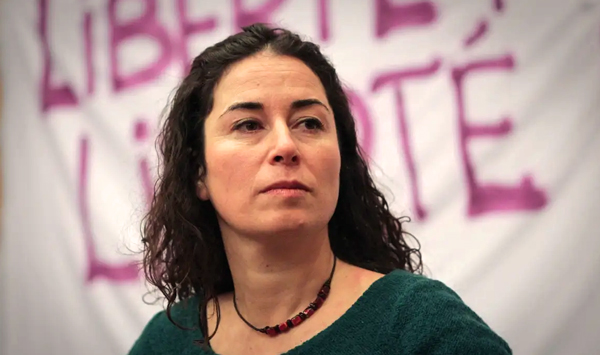 Following four previous acquittals, the 50 year old sociologist, teacher and researcher from Côte d’Azur university, has once again been sentenced to perpetuity by Turkey’s Supreme Court, for a so-called attack that has since been demonstrated for the past 24 years to have been the result of a gas explosion  on Istanbul’s spice market, causing seven deaths and 121 wounded.

Held in custody in 1998, tortured, sentenced to perpetuity, she was liberated in 2000 after 36 months in prison. She has always refused to give the police the names of the Kurdish fighters she met in the context of her research on the Kurdish question. The Court of Appeals invalidated the decisions for the acquittal on several occasions,  with Pınar Selek’s refusal to “cooperate” being complete the grotesque trial seems set for a perpetual replay with the changes in judges. She was even made the object of an Interpol arrest warrant in 2014.

The justice system also accused her of being a member of the Kurdistan Workers Party (PKK) and of having prepared and set off a bomb, something the anti-militarist and pacifist militant has always denied. Liberated once again in 2003 following an expertise that established the explosion was caused by a gas leak, she now lives in France. On the basis of this report and of the withdrawal of the statement by the main witness for the prosecution, Turkish tribunals acquitted Pınar Selak a number of times. This time, the Supreme Court has taken up the cause.

The appeal before the Supreme Court bringing up the sentence yet again only concernsPınar Selek and none of the others who were acquitted in this  24 year old matter.

Here is what Pınar says about it herself, in a declaration about the sentencing to perpetuity which she refutes:

“Everything is possible except for my renewed sentencing. Not only is this judgment unjust and insane but it is also inhuman  since the file contains several expert reports establishing the fact that the explosion was caused by a gas leakage, a judgment in which not a single time was my statement received on this matter, and where I was not asked a single question about it. The trial was launched based solely on a statement by Abdülmecit O. declaring we had acted together, and who later refuted his statement  before the tribunal since it had been extorted through torture.  This person was acquitted with me and his acquittal was definitive with the appeal only being requested concerning my acquittal. Thus, this judgement has nothing to do with the Law.

As the reasons for the judgement have not yet been published, I can make no further comment.”

Another cascade of trials will result from this decision, with the proceedings already being opened, concerning indemnities for the victimes of the ersatz attack. A relentless financial harassment to follow…

Injustice is free-wheeling in Turkey.  Every judge wants to demonstrate his allegiance to the regime. The former copresident of the HDP Selahattin Demirtaş, now a detainee in the type F prison of Erdine for for the past five years described it very well in a recent open letter. The armed forces on a war footing since the Turkish presidents declaration that he was preparing a new territorial grab in Northern Syria, and always engaged in “special operations” in the Iraki border zone, keep the “Kurdish” topic at the top of their agenda. Arrests of journalists have started again and the hunt for “terrorists” brings us images of arrests worthy of those in the 90s. Apart from which, Turkey is sinking deeper into the inflationist crisis.

The regime, attempting to impose itself at the international level by taking advantage of the war in Ukraine, constantly hardens its repression against the Kurdish movement. This umpteenth burst of injustice following orders is one of its grotesque illustrations.