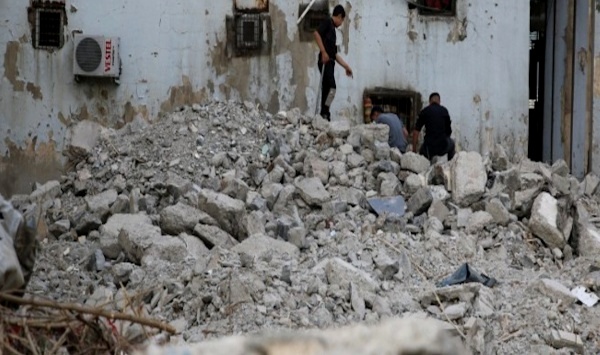 The Mem û Zîn Cultural Center in Cizre is no more…

Opened in 2004 in the Şırnak district of Cizre, its name was inspired by b the immortal work of Ehmedê Xanî, one of the pioneers of classical Kurdish literature.

This center was a cultural birthplace for thousands of students who learned how to play the Kurdish drum, the erbane, the bağlama, the guitar, how to dance the halay and were initiated to the popular oral art of Kurdish bards, the dengbêj. Dozens of artists came through it, were formed in their art, and musical groups such as Koma Meyaser and Koma Sorxwîn appeared in the center’s midst.

Closed during the curfew period in the years 2016-2017, the cultural center had not been authorized to reopen its doors since and has just been demolished by the owner in order to put up a building on that location. During 5 years, many attempts were made in vain at re-starting  cultural and artistic activities. On every occasion, the center was subjected to police raids, its doors sealed and the staff and artists training there were arrested. Nûdem Durak, Kurdish singer and member of the group Koma Sorxwîn, sentenced to 19 years in prison for singing in Kurdish, is among them. She is still behind bars.

According to the information relayed by Mahmut Ruvanas from the Mezopatamia Agency (MA), the local population is crushed.

One of the interviewed shop owners expressed his sadness: “Inside, it was ornamented with flowers, there was a lovely stage on which everybody could watch plays, concerts. I was their neighbor since the opening. I am very sad over this destruction, but what could we do about it?”

Umut Botan worked at the cultural center for a long time. “The (collective) memory can also be understood as a set of values created in a society over time. Seen from this angle, one understands the importance of the mission of an institution such as Mem û Zîn, in raising the awareness of a society of its own identity, its own culture, its own reality”, he said. Umut underlined the fact that the conquests, the value added gained by the town of Cizre by the center, were indisputable, and adds: “All the people active in the musical field or other artistic and cultural branches in the region came through Mem û Zîn where they found the possibility to progress in their art. This was the center of the Mem û Zîn Center’s mission.”

“The fact that this institution, created and developed at the cost of innumerable concessions and whose influence flowed through the population’s capillary veins, cannot pursue its existence because of oppressions, is distressing. The destruction of the Mem û Zîn Cultural Center in Cizre  is one among others, because in recent times, a number of towns, institutions and buildings that made up the cultural and historical fabric of the region as well as its soul have been sacrificed to the construction of flashy buildings. It is hard to fully express the devastation created by this demolition. But it is our duty to pursue the tradition, as the values and the soul born in the Mem û Zîn Kültür center fully deserve.”

Read also: the series of reportage by Loez:

Part of the people’s collective memory is thus destroyed, as were destroyed historical neighborhoods such as Sur, during the recent years of siege. What is involved is much more than a simple “gentrification” of old neighborhoods. What is targeted is the lifestyle, Kurdish culture, just as a colonizer would do. Combining profits for the cement makers, corruption and a policy of cultural eradication in lands with a majority of Kurdish people.

The tandem of bigots and ultra-nationalists currently holding power in Turkey thus pursues its policy of Turkifying territories, policies that were formerly conducted by Kemalist nationalists. Turcity progresses with bulldozers, while continuing the incarceration of opponents and the dismissal of elected members.

Thus, the agenda remains one of preparing Kurdish youth to a future with no cultural identity, especially when this can be combined with juicy housing projects, in the framework of  markets ruled by the habitual corruption.

One must not forget that, from 2015 to 2017, the Kurdish people experienced in their flesh the exactions and murders committed by the Turkish State’s forces of repression, precisely in the name both of defending a cultural identity and the need to live together in order to share it. Turcity is the exact opposite of this struggle.