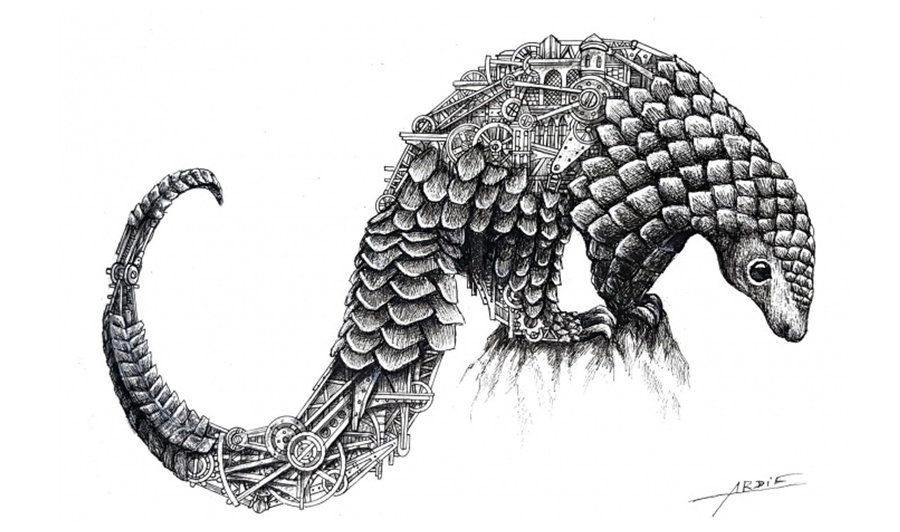 Here I am, half-vaccinated. I’m looking out for side effects because I’ve been warned that the vaccine is from China.

I’ve read a lot of the European literature on the topic of vaccines and I have the impression that a lot of those who’ve had a fear of injections since they were small disguise this fright behind specious arguments. According to plot-fueled comments, my genome should soon be replaced by that of a pangolin after which I will be eaten by a mandarin.

I have only fifteen viable days left before my current incarnation gets recalled.

All right, my teasing side is taking over. And, in any event, the Chinese vaccine does not contain a messenger, nothing but a subliminal message saying it has slipped into Turkey through the rustling of the “Silk Road”, no doubt in anticipation of commissions on future contracts.

Because more than pangolins tails, there is a matter of the wings of economic diplomacy. In Russian or in Chinese, when in Turkey, it’s “I’ll scratch your back if you’ll scratch mine” in these days of economic crisis.

Anyway, I wanted to preserve myself from a nasty viral meeting. We’ll see. At my age, Lao Tseu can only give judicious advice. “When fear is not on guard, the fearsome occurs.”

In some European countries, aged politicians were vaccinated to give an example. In France, there was a certain Moricette who was the first person vaccinated (a name I had never heard before). Over here, we had an old grey wolf, the dishevelled kind, the President of the ultra nationalist and Kemalist MHP Party.

A columnist so happened to attempt a bit of fun of the old greyish lupus and published a fake news with quite an impact. In the humor pages of a media it was written that “Gülnaz Şırınga, the nurse who had vaccinated Devlet Bahçeli was attacked and beaten up by a group for having been heavy-handed.” A naive tv personality then read this among other news on screen.

A rather stupid joke, you understand, and so out of character too. Well, not really. Everyone knows what a sense of humor Bahçeli has, yes? What is the expression? “A humorous as a jail door”? You couldn’t express it any better.

No one would have heard the first thing about it if the gaunt nationalist had not brought up the matter in Parliament during his group’s speaking period. Yes, at the Parliament! As if this were a matter of State.

In previous weeks, he was already denouncing journalists by name for comments he hadn’t liked, and called for sanctions against them. The fact is he is the signatory of the power alliance between the AKP and the MHP – and as long as he’ll remain standing – the regime will protect him.
In this case, the secondary effects of the vaccine may consist of sending before a tribunal a journalist who wanted to make a joke.

And we don’t have many journalists left.

Between those who write on orders, those who express the wishes of the Reis before he does so himself, those who photograph our local fading stars and pay attention to the slightest fart favorable to the regime, there are only a handful left of quasi clandestines who are barely paid. Here again, I’m exaggerating. Because there remain medias whose profession it is to invent the void between two eructations from the President, next to some saved ones in abeyance, who owe their salvation solely to our phoney opposition or because they are vaccinated against judicial problems, seeing the number of times they have been saved through appeals. So there are still a few journalists remaining, between two trials and one inquest for “propaganda”, who will pay the cost of the Powerful one’s anger.

Like a toothless mouth, the Turkish media reveals a panorama in which the craters caused by the closings fight it out with the absences caused by self-censorship. Here and there, you find a fake tooth in order to create the illusion of a free press. As a result, opening the mouth becomes so ugly that everybody shuts up, save for a few rare exceptions.

And these exceptions are the ones still being chased down by the pack of greyish lupus. But I’ve just noticed that I should say “canis lupus” because “lupus” is a disease, the reaction of a body attacking its own self. But what else do these ultra-nationalists do when they go on making the social body sick by attacking it for a century, yesterday in uniform, today under Ottoman disguise.

And for this, there is still no vaccine.