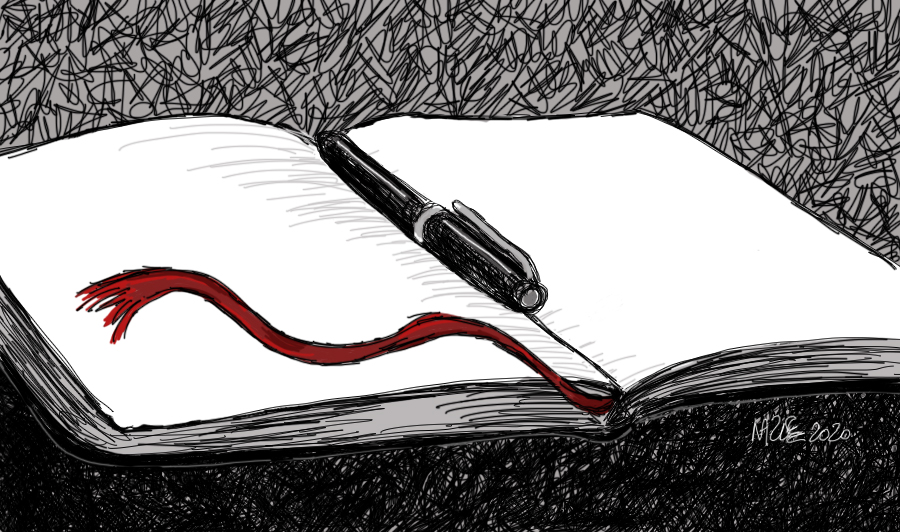 This text was kindly entrusted to us by the author in order to share it with our readers.

Mid-June: There I am, at night behind a picture window, at the end of an endless hospital corridor… “Panoramic” they call this view out on the world offered to the patients who can still ambulatory, large impeccably transparent windows opening out on an “outside world” made of promises of a future and revived memories, and that cannot be opened even by one millimeter. Outside, the storm. Howls from the wind muffle the familiar sounds from the hospital corridor – coughing fits, heavy steps, dumb, limping, bursts from the television, a bell desperately calling the nurse – they lead the night towards its depths, its abysses, its secret darkness. For the first time in five months, I contemplate Berlin searching for an image to carry away with me. The city and I, face to face on both sides of a huge window that doesn’t open, suspicious and mute, looking at one another. And in this double gaze closed to all appeals, all promises, we both grieve a bit more… The deaf granite profile of the city erases my frail silhouette as you would erase a stain. Plunged in the night that bars dreaming of elsewhere, of another time, the night bars the access to all words… I walked, walked, pacing the long unhappy corridors of fate, to come to a standstill in front of the glass wall. Floods, torrents of rain, end of the world… It is too late now for a tale where life crosses my road, everything is too murky… The dove escaping from this ultimate flood carries no olive branch in its beak.

January: After an autumn spent in the hospital, medical exams, etc, somewhat recovered, I settle in Berlin after a four-month delay. In Geneva, they interpret Mozart’s The Abduction from the Seraglio on the text from The Miraculous Mandarin, in a production by Luk Perceval. First trip in months! Perhaps the road that will lead me back to writing, no matter how lifeless, passes through this town where I wrote my first two books! On the final two days in Geneva, I am placed under police protection because of death threats.

February: the verdict of my trial, now ongoing for three and a half years, will be pronounced this month. The prosecutor is requiring nine years. Waiting for news I will not be able to face alone, I go to Paris.

Valentine’s Day: I AM ACQUITTED!!! When I receive the verdict, sitting next to amazed gendarmes, I cry like a child for several minutes. In a café, place Saint-Sulpice, I cry. As it becomes concrete, my happiness veers toward sadness, or the opposite…

Plans, programs… At the end of the month, publication of The City in Crimson Cloak in Italy, of Requiem for a lost town in France, translated for the first time, of the Stone Building in Spain. Three months of travelling between Italy, France and Spain! I look at the world suddenly opening up before me, like Lazarus returning from the dead…

March: PANDEMIC! On the last day prior to confinement, I make an emergency visit to the hair dresser’s, visit the Genocide Museum. Masks and toilet paper are not to be found. All programs annulled. The Spanish publisher moves back the release date of The City in Crimsom Cloak, like a still-born awaiting burial in Milan’s closed book stores.

Fear and anguish land on me, later than expected no doubt, but massively, implacably. The nightmare begins.

April 1st: the medical doctor I’m seeing for a routine check-up suddenly starts to panic. Fever. On the morning following an infernal night, for the first time, I can no longer breathe. Ambulance.

April 2: Hospital. The problem: in an unexpected place, my heart, this heart in which I have always trusted…

Sunday night: Very late. My mother calls. Panicked… In the retirement home where she lives, everyone is forced to take a test.

Three days later: my mother’s tone of voice on the phone, calm, poised. Too calm… She says the test results are not available yet. I know this voice that crossed the wall of fear and anguish on the day when, I also knew I was going to be arrested, I had taken one step beyond fear, I had suddenly become calm, very calm, like at no other time in my life. And now, even on the phone, I can recognize the voices from hospital corridors (or from prison)…

My mother in the hospital, I sense that worry will make me lose my mind.

The following week: the media takes hold of the scandal. Some fifty women from a retirement home were forcibly pushed on to a bus, on a Sunday night, in the middle of the night, to be taken to the hospital. Fainting, cries, howls, goodbyes… My mother is among these women who are dragged to the hospital, she spends the first night in a packed corridor, crammed in with the others. In a few days, they are submitted again to testing, then everyone is liberated at once, or rather, thown out on the street. The retirement home, arguing risks of contamination from the hospital, refuses the return of dozens of women, including my mother.

May: fear, anguish, depression, insomnia… Youtube documentaries, meetings on Zoom. Spring is already here, but I cannot find a single reason to step outside my place. The hospital, again…

Mid-June: With grave and determined faces, four medical doctors, the head of the Department and his assistants, enter my room. I understand… The diagnosis has been established. I suffer from an auto-immune disease for which there is no cure, one of the rarest in existence. Very rare, very violent… Despite the pandemic, my immune system must urgently be weakened, I must begin chemotherapy on that very day… My eyes fill with tears, “I am in exile”, I say as my only reply… Everyone understand what I have realized: the perpetuity of this exile, the impossibility of a return… But I am the only one who can understand the meaning of the sentence that follows: perhaps I will go to Paris. A love story, they must have thought.

To whom could I explain this? It was in this city, Paris, that I was acquitted for the first time, where I saw all the roads opening before me, where I cried the tears of Lazarus in a café on place Saint-Sulpice. For the first and for the last time.

Evening, in the garden of the hospital. On the other side of the gates, a helicopter takes off, the pilots salute a woman of whom we understand that she is ill, condemned… I open my palms, I release all the doves that have survived the flood, toward the East, toward the horizon, toward the horizon of return.

P.S.: Several months after the legal delay has expired, against every fundamental rule of law, my trial begins again in Istanbul, instructed by another prosecutor.

Translation by Renée Lucie Bourges, from the French version by Julien Lapeyre de Cabanes, at the author’s request.