Murat Sevinç • Dear Hamza, may I be forbidden your pardon… 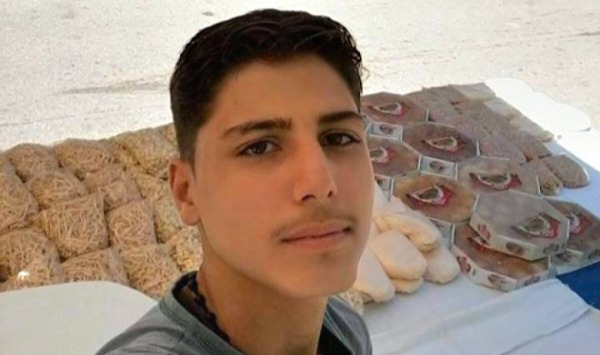 Last July 15, Hamza Ajan, a young 17 year old Syr­i­an, attempt­ed to stop a group from assault­ing a Syr­i­an woman. He was beat­en to death. This hap­pened in Bur­sa. One of the two per­sons involved was tak­en into cus­tody and jailed.

Dear Hamza, may I be forbidden your pardon,
may your two hands remain on my collar…

Some news­pa­per allies (of the regime) described the news in these terms: “an argu­ment”. There you have it, this is how things go here, peo­ple die from a beat­ing, over an argu­ment. Their death is iso­lat­ed and some can write “the argu­ment” the same way one oth­ers will read those words.

A sev­en­teen year old human being, a youth, a kid…

A few rag­ing fas­cists grabbed Hamza and start­ed to beat on him. They killed him in a sor­did beat­ing. Beat­ing him on the head, which his par­ents did not even dare to kiss, on the back, the arms, the legs, beat­ing on his heart that had stopped beat­ing.

“The inci­dent” occurred in Bur­sa, in the evening of July 15. This is how the news items lead off. Hamza Ajan, 17 years old, work­ing as a mar­ket sales­man attempt­ed to defend a Syr­i­an woman being insult­ed by a bunch of hood­lums. He want­ed to pro­tect the humil­i­at­ed woman. Clear­ly, as he was an hon­or­able young­ster, he could not bear the thought of remain­ing pas­sive. Hamza was a moral human being.

The rest is known… As we hear it told all the time: “Despite all attempts at the hos­pi­tal, he died the night of the inci­dent around…“

Some were tak­en into cus­tody. One was arrest­ed. Does any­one doubt, word for word, the defense he will present? The busi­ness suit he will wear, the tie he will choose and the love of the flag and of the coun­try he will expound before the judges?…

Hamza is Syr­i­an. Maybe he was there for the fun of it, and was delight­ed to work at the mar­ket. How he had hoped to be wrenched from his coun­try. His dream was to become a mar­ket sales­man in Turkey.

Per­haps Hamza dreamt of being despised by fas­cists. Some clear­ly want this. Those who, wear­ing the qual­i­fi­er of “oppo­nents” can place the word “democ­ra­cy” on their tongue, but only on these lands. Those who raw, emp­ty, believe every­one out­side them­selves is an idiot, and who lead their life with the illu­sion of being extreme­ly well equipped, as long as they man­age to pro­nounce the words “realpoli­tik” and exte­ri­or pol­i­cy”.

“Let them go baaaaack to their coun­tryyyyy… This is our land­dd…. They should go home and fight… They are rii­i­i­ich… They are….“

We can­not know if he intend­ed to go back. Hamza did­n’t have the oppor­tu­ni­ty, he was beat­en to death. He was sev­en­teen years old. He was a youth, a child with a sense of dig­ni­ty who want­ed to pro­tect a woman.

Apart from a hand­ful of peo­ple who will care about it, no one will both­er about him, I know it, we know it. He will be pulled up in the news, his name will be men­tioned from time to time, by a hand­ful of peo­ple who still care about Nadi­ra Kadiro­va 1A 23-year old Uzbek found on Sep­tem­ber 25 2019 dead from a gun­shot to the heart; in the home of Sirin Ünal, AKP deputy for Istan­bul where she had been employed for a year. The death was declared a sui­cide.; about Rabia Naz, a lit­tle girl knee high to a grasshop­per 2Found grave­ly wound­ed at the entrance to her home, died in the hos­pi­tal, aged 11, on April 12 2018. The death was declared a sui­cide.; about Ali Ismail 3Mobi­lized like thou­sands of oth­ers in the Gezi resis­tance, he was beat­en to death by the police on July 3 2013 in Eskise­hir, under sur­veil­lance cam­eras. After a 38 day coma, he died at age 19.; about those who lost their lives on rail­road tracks, the oth­ers…

For my part, I have noth­ing to say to the racists, the cor­rupt with­out hon­or, I have no val­ues to men­tion, no prin­ci­ple to offer up. My con­cerns are about myself, this time.

As they say in my tongue: “Dear Hamza may your place be in Par­adise, may I be for­bid­den your par­don, may your two hands remain on my collar…”

Murat Sevinç was born in Istanbul in 1970. He entered the Political Science Faculty of Ankara University in 1988. While completing his masters, he became an assistant at the Constitutional Tribunal. He completed his masters and his Ph.D in political science at the same Faculty. He has published articles on constitutional law and its history.

He was fired by decree in 2017 during the state of emergency while he was teaching at the Political Science Faculty of Ankara Univerity. He is the author of two books and of numerous articles notably in Diken.