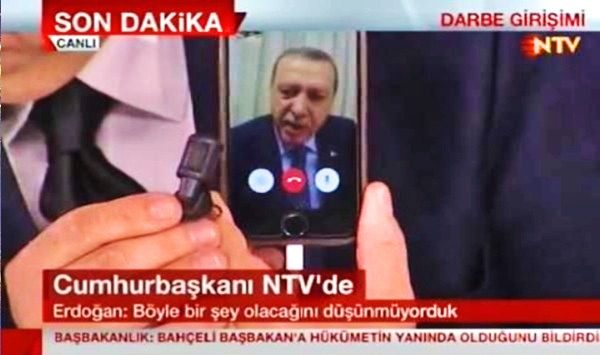 On July 15th 2016, the whole world had eyes on an attempted coup d’etat in Turkey. Since then, it has turned into a kind of historical marker for all and every commentary concerning repressions against opponents to the Erdoğan regime.

Not one press article, not one commentary, not one analysis that does not mention “the arrests following the attempted coup d’état in 2016…”

Simplifying in this way relativizes everything that came before that day in 2016 and leaves the coup d’état itself unquestioned as everything that follows appears to be a consequence, a “reaction” – deeply analyzed of course – but a simple counter against those in power and the State of Turkey. And as icing on the cake, the day itself becomes that of a failed coup d’état by undifferentiated enemies of Erdoğan and the Republic, thus re-labelled into opponents from day one onward.

Anyone attempting today to analyze more closely this “gift from heaven” for Erdoğan – one occurring just at the right time, to speak more truthfully – is suspected of conspiracy-mongering. We had done so nonetheless in the heat of the moment on July 16 2016 and Kedistan magazine, then on a mainstream server, was put out of business for close to fifteen days. Too many connections, and mostly a targeted attack against the server. Everything pertaining that day to the “Coup d’Etat” was targeted along with those social media and accounts in Turkey not using necessary precautions.

Thus, the coup d’état was not a failure for everyone.

Of course, like any assassin erasing traces of his crime one after the other, the AKP regime has made any serious and documented analysis of that day an impossible venture. All that exists now is an official hagiography. Figures concerning victims are mixed together, and attempting to clarify the lynchings of youths described as soldiers is useless. The “heros”, the “martyrs” belong to the nomenclatura. All the rest being “FETÖ” enemies, arrested, dead or locked up since. Attempting to find out if these “recruits” knew what they were doing, who had sent them into this adventure, is a lost cause. Many were lynched, the chains of command were dissolved, witnesses told to be silent or denounced as a member of the Gülen sect.

The official narrative, the official July 15 novel, distributed as a leaflet in schools, talks of the affront against Atatürk’s Republic and its current representatives, namely Erdoğan and the AKP.

The elaboration and build-up on this tale was the work of many hands.

First of all, on the day itself, this incredible call to the People by Erdoğan, live, invited to do so by a TV anchor-woman.Reacting to the call, this People, mainly bearded and religious along with Turkish extreme nationalists, invaded the theater of operations of the “coup d’état”, visibly less-well prepared than the one described in the accusations at the trials which followed. In fact, there was a blood bath on that day.

Military forces deemed “faithful”, Turkish forces “maintaining order” contributed to turning the winds in favor of the regime, while facilitating the job of Erdoğan’s elected “People” on the street.

Within a few days, the main opposition Party, Kemalist CHP, had raised the flag of the outraged Republic. As an exceptional measure, Erdoğan even allowed it to hold a meeting in Taksim, the square prohibited since the Gezi events; a meeting “against the coup d’état”, of course. A good part of the traditional extremist left in Turkey followed in its wake of “national unity” to the point of raising adverse misinterpretations within European leftists. The HDP alone showed the political clarity and courage to call for mobilization elsewhere.

Nor did the HDP associate itself to the High Mass organized on the heel of the event by the Erdoğan regime. The latter, too pleased to see the so-called “social democratic” opposition at his feet, did not deny himself the pleasure of making them eat their hat. The entire dossier we devoted to these events immediately following July 15 along with the translation of the speeches can be found here… Whoever wants clear water goes to the source.

This is where one finds the origin of the apparent contradiction between the Ottoman pretentions of the Turkish Reis and his open support of nationalism and Turcity, more clearly asserted than ever. With the disintegration of Gülenism, one sees the arrival of the ubiquitous flag in the large demonstrations and of an aggressive exterior militarism.

The following beginning of the school year saw the appearance of the official hagiography for the use of children and adults.

In a few words, as if all this could be summarized without being caricatural, the facts, reactions and referals to the analyses done in 2016 concerning “this blessed day”.

But 2016 follows on 2015, and 2015 is the fruit and the result of a policy rooted for Erdoğan in the beginning of the XXIst century, and, more than one hundred years ago, in the exclusive and war-like nationalism known as Turcity in Turkey.

So that this July 15 2016 does not mark a reversal, but nothing other than traditional Turkish policy and, at a given moment, a massive acceleration for the regime with the consolidation of its full powers. This will also facilitate institutional reforms.

So that July 15 2016 is not the start of the repression of social and political oppositions, but a crossing-point only.

In Turkey itself, the year 2015 saw the political breaking off of a negotiated peace process with the Kurds and one precisely suggested to Erdoğan in the first decade of the years 2000 by…Fetullah Gülen, the organizer and presumed sponsor of the coup d’état. He had advised Erdovan, when they were allies in seizing power, to separate the Kurds from the PKK by offering a peace of the braves, awarding the recognition of a few cultural and social facts and having the process approved by PKK leader Öcalan. This was accompanied by “cordial” relationships with the Barzanist regime in the Iraki Kurdish entity. These “processes” had the further advantage of being favored by the European Union.

In 2015, the AKP regime unilaterally denounced the “process” following waves of attacks against the Kurdish movement and mobilizations favoring peace. And, mainly, after spectacular electoral breakthroughs of the HDP, in the Presidential election as well as at the local and legislative level, which were seen as a threat to the established rulers, despite all the tensions. On paper, an alliance between the HDP and the Kemalist opposition represented by CHP’s electorate, could bring down the regime. We have seen what such a “tacit” alliance produced recently in Istanbul, even if this amounts to a false municipal alternative.

At the end of 2015, faced with the regime’s hostility toward Kurdish municipalities, their demands for democratic autonomy in line with the abandoned “process”, a strong majority of Kurdish youth reacted to threats of military occupation and took up arms as they could in order to defend this democratic Kurdistan of their dreams. The episode was known as the “trench war”. There again, if one looks closely at the list of military commanders leading the savage repression, the exactions, the murders under siege, one finds the names of “Gülenists”, who were omnipresent then in the State apparatus.

The mask of Gülen the friend of Kurds fell in 2015 and those Erdoğan sent to carry out the “ethnic cleansing” turn out to be those he will assail on this 15th of July 2016. Here again, look up the year 2015 and the first months of 2016 on Kedistan. We followed the horror step by step. These are the same horrors Zehra Doğan lived through and which led to her imprisonment. She revisits this period at length in the cartoon strips she drew in prison, the French translation of which we are currently finalizing and which will appear at Editions Delcourt in early 2021.

What follows after 2016 should not be seen as a kind of competition in the infamy of figures. The regime needed to purge the State apparatus of economic corruption, the army, justice, the police as well as various nooks and crannies. Up until that point, the words “belonging” and “terrorism” on an accusation meant “linked to the PKK”. Turkish injustice has created a sub-division in its attempt not to confuse the “affairs” of opponents. Between the accusations against novelist Aslı Erdoğan and writer Ahmet Altan, there is a range of conflations and nuances in need of deciphering. This is why, once again, one must stop with this “following the 2016 coup d’etat”…

An enormous number of trials, often still underway, were instructed by Gülenist judges or prosecutors who were then arrested. Their trials are not instructed inversely by Kurds, but sometimes by reconverted ones, or, of course, by the new promotion of corrupt ultra-nationalists.

All accusations are useful, as long as one eliminates an opponent.

A reminder of the coup d’état is thus only interesting as a justification to the constant and continuous repression, arrests and destitutions of elected members, potential prohibition of the HDP, the persecutions of intellectuals, the retention in prison of philanthropist Osman Kavala and of Selahattin Demirtaş among others… It all becomes a kind of “judicial” back-drop, acknowledged by some European States in fact when speaking of “sovereignty in the fight against terrorism”. This diplomatic way of not irritating Turkey, seen as a dam against immigration, has become grotesque. Will these same states be sending diplomatic representatives to the commemorations?

Of course, no one can deny that since this “failed coup”, repression and purges have followed one another in waves. But had that failed coup d’état not existed, there would have been need to invent it. The regime’s fascistic actions are not simple consequences of it.

In a way, Kedistan was born of the will to inform outside Turkey, first of all on the “Turkish spring” represented by Gezi but most of all since then, in order to denounce these war crimes of 2015 and 2016, their extension into the Syrian war, and in order to support as much as possible those implicated who were resisting or even, as in Rojava, attempting to build a democratic autonomy in the midst of conflicts.

Summarizing these last years is impossible, especially by linking them to a simple magical date. The Middle East, so profoundly undermining Europe through various aspects, conflicts and interactions, deserves that we go beyond the shock of images or the bare daily factual description of the crimes taking place there, in an endless litany. It also deserves better than the eternal cartoons around a calendar.

In wide strokes and several dead ends, this is the extra step I have attempted taking on a July 15th.