Around a Toppled Statue 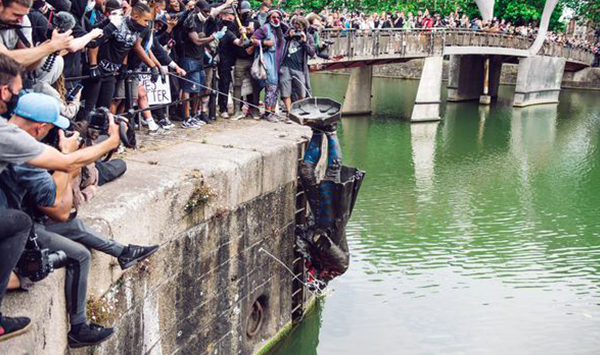 From George Floyd’s assassination by American policeman to the image of a statue thrown in the water in Bristol, just as “dead ebony wood” was thrown into the sea on merchant ships, there runs an accelerated trajectory of consciousness over what the Nation-States have piously kept locked away in their ship holds.

Their stories of conquests, exterminations, genocides, colonization and slavery, called “past brilliance and power” and hidden under the covering of “the benefits of development”, are still told in the streets and parks, on the squares, on the front walls of buildings…These national novels are taught in school and glorified in public places.

For example, when asked: “Who was General Bugeaud?”, the well-instructed pupil will do well to reply “the one who pacified Algeria.”

If the pupil digs a bit, here is what he or she will find or see:

In August 1852, a monument was erected to him in Algiers and another in his hometown. The Algiers statue was repatriated in 1962 and installed in the village of Excideuil in 1999. His name was given to a village in the province of Constantine (to the south-west of Bône). During the Alerian war, a promotion of the Special Military School at Saint-Cyr adopted the name of “Maréchal-Bugeaud”. A Parisian avenue bears his name, as well as the main square in the town of Périgueux where his monumental statue was erected, done by Augustin Dumont in 1853, as well as a street in Lyon. A street in Marseille and a school also bear his bear in the 3rd arrondissement, in the Belle de Mai neighborhood. A posthumous medal in Bugeaud’s likeness was done by engraver Louis Merley shortly after the Maréchal’s death.

Thus informed, the pupil will receive a good grade. And if he wants to know more, he can always call on his grandfather who will gladly sing for him “Father Bugeau’s cap”.

Only much later, at the Lycée level perhaps, will he or she learn of the role this figure played in the bloody repression of the uprisings in 1834, then in 1848 in France, in order to maintain the power of the existing regime. Victor Hugo will also quote him as saying “had I fifty thousand women and children before me, I would mow them down.”

Another event, known as “smoke-outs” is linked to this “historical” figure. In his days, he merely replied “respecting humanitarian rules will only prolong the war in Algeria indefinitely.” Much later, other famous French generals will say the same thing, thus justifying torture in keeping with his tradition.

Shutting men, women and children into caverns and burning them alive, to serve as an example, was thus a national imperative for France’s radiance and the conquest of its colonies.

The same reasoning was applied to slavery, the triangular commerce greatly profiting a bourgeoisie and its merchants whose statuary everywhere stood in good stead as proof of precious services rendered to the edification of commercial Empires.

I will be told: “Those were other times, no historical misinterpretations, please”

Well and good… In those times then, if I understand correctly, wars in Algeria and elsewhere were conducted against people who resisted for the fun of war, no doubt, and who, in their inner minds were already taken, I am told, by the notion of beneficial colonization. No one, except for savages, would have had the notion of refusing this “beneficial civilization”. The times required it, I tell you. For the “negro trade”, of course, the argument will be made about “blacks selling blacks” and universal agreement over that. Muslims also had for centuries established their trade in eunuchs and left certain zones un-Islamized for this purpose… A sign of the times.

A totally different period, that would have founded our glory, who we are, and that is what we must look at…Without it, our Nation-States would not be what they became. Honoring the pioneers, erecting a statue in their name, is thus paying homage to our glorious history, and leaving matters of “details”…for the future.

The national narrative, a novel filled with “complex” personalities would thus unite the People around the enrichment of its bourgeoisie and guarantee social peace in this way. In this context, searching through the garbage dumps of history is almost a form of insurrectional terrorism.

And erasing those who, in “those former times”, contradicted the rule of unanimity concerning the benefits of colonialism and the implementation of a free trade economy, conducive to growth and development, took various forms “accepted back then”… Accepted, that is, except by those who were subjected to them in their flesh. So, treating women and men as sub-human savages when they cannot be eradicated from the lands where they were born, negating their human existence in order to enslave them, turning them into merchandise, would be “a notion admitted in those days”.

This masking card has a name, it is called institutional racism. And it was translated into “black codes”, accounting records, novels and icons. More recently, into a “Jewish file”, a “Jewish statute” and a star.

Who will manage to convince me that this state of being, historically dated, does not belong to our collective unconscious, constantly re-formatted of course, but having its “national” transmission patterns, its statuary, its books, its movies.

In France, a museum on Quai Branly in Paris conserves and exhibits human cultural heritage from a number of regions in the world. It so happens that the possession of these patrimonial artefacts is not, for the most part, a gift from the heavens. This possession is linked to colonial pillaging on the one part, or to a representation of peoples considered “unable to preserve their history”. In short, from human zoos to a-historical “bananias”, we arrived at the “Museum of Primitive Arts”. But it has become a “real museum” nonetheless. In itself, its presence could summarize all questions and open a debate. And even its curators are asking questions, as we know, concerning “restitutions”, for example…

I cannot deal with the abomination that the “human zoos” represented. The controversial historian Pascal Blanchard who defends the idea of a necessary “Museum of Colonization” has devoted a lot of time to the topic…But who was it, no further back than in 1994, who brought children into an animal park near Nantes to discover a “negro village” promoting a brand of cookes called “Bamboula” sold across France since 1987. Anoter time so close to us, and ten years after the “March for Equality and against Racism” since distorted by ” good buddies”from an electoral shop.

In 2019 (prehistorical times!) a representative for the French police union said on TV “using the term ‘bamboula’ is acceptable”. First its evocative value, like a madeleine in Proust, no doubt.

Racism as an ideology is closely linked to History, to the predatory practices of Nation-States and their very edification. For those who wish to understand, Turkey’s case for example is a textbook illustration with no reference to an ancient past. Kedistan has spoken and traduced about it often enough in its colums and I refer once again to this blog where there is also mention of statuary, but not only, if you choose to read more fully.

George Floyd has led to an upsurge of sediments from History, those that nationalistic narratives hide under notions such as “a common past” required in order to live together. Paradoxically, the victims, whose existence was negated, are part and parcel of it and their descendants are invited to assimilate without any qualms, or to “go back where they belong”.

When these same young generations, faced with yet another racist murder in the United States find themselves confronted with lies, knowing full well they are the victims of these ongoing racist “traditions” through social discrimination, police violence through the State apparatus and when finally, they rise up to say no, they find themselves face to face with Bugeaus’s descendants and a “certain idea of France”, of a “national identity“, its feet solidly set on their pedestal.

So toppling a statue is a good beginning…