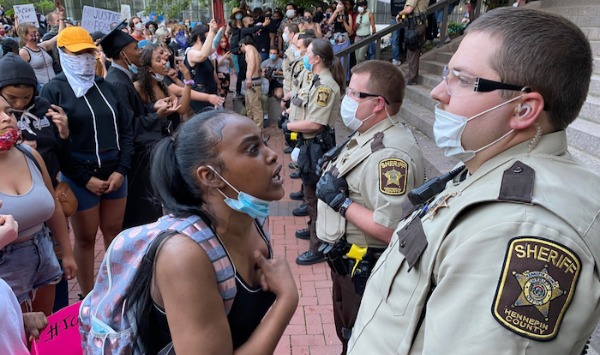 Regarding George Floyd’s murder in the United States, no one can get away with a simple tear, some moaning, three twirls from the puppets, and the show is over.

What could have remained a simple news item in the sequence of police violences leading to death has become, through the power of a video image that travelled across the world, a racist murder filmed live. And this act, of which a number of identical ones never reached beyond the back page in the news, thus made public, suddenly crystallized elements that go way beyond a simple call to a moral condemnation and the signing of a petition.

Self-righteousness, preferebly white and right-leaning, immediately organized countermeasures, exhibiting the victim’s “police record”. Under this guise, the matter would be a regrettable blunder or clumsiness during the exercise of the “State’s legitimate violence” against a delinquent, committed by an isolated policeman who would be sanctioned, “of course”… Then, authorities would attempt to establish “prior weaknesses” in the victim, during the autopsy. Any analogy drawn between these facts and developments concerning persons who died in the hands of State police in any other country would, of course, be accidental… However, the words “I can’t breathe” bring to mind so many State murders, committed by a civil servant acting as a go-between, violences that were never acknowledged. We are now at the phase of “violences are useless.” But everyone knows that, these violences led to one more death, carried out like a recollection of lynching in the collective unconscious.

Yes, we could express it this way with the added fillip of a healthy dose of anger. But what’s the point in staying in the agitated foam from the event, between moral reaction and diatribe. Faced with other “images” that had saturated screens within 24 hours, such as that of the child’s body washed up on a Mediterranean beach, I had also grabbed a mike during a “rally” and “condemned”… So many more tortured migrants’ bodies resulting from European deciders’ choices have joined that one since. Moral indignation is soluble in sea water, and falls apart on social media and in TV studios. It rarely hits the target.

So, one week later, it is with the utmost attention that we must look at the mobilization of these thousands of people, become hundreds of thousands in more than one hundred major cities in the United States and elsewhere across the world. And what we see and hear is not only a moral application of the word “racism” but concrete references to the manner in which is has shaped the history of colonial and genocidal States, how it has served as political caution to a number of exactions and oppressions. And the official access to power of a President of the United States, peddler of the supremacist ideology, useful to his policy and meaningful to his white electorate, has brought these questions fully into the light. Nationalist retrenchments, under cover of sovereignty, at work everywhere, and that include in their ideology an uninhibited racism must also raise questions over what is truly going on.

Whereas the most “productive” of the poor social classes in the United States are made up of a majority of blacks or latinos, the Covid-19 pandemic has brutally thrown them into massive unemployment. There was no need for the political addition of racist policing cutting loose. Here, we can think of a number of situations and contexts, in Europe as in Brazil, for example, offering great similarities.

This additional “murder of a black man” as it is termed by well-established gazettes would have been simply one extra death, if reasons for the anger and its explosion had not be so strong and current.

Thus, spontaneously, media talk of “a crisis unprecedented since the assassination of Martin Luther King”. This is all that was needed to reunite the “black cause” in the face of an American President mobilizing the national guard via twitter, and calling on it to “fire”.

What is remarkable is the spreading of reactions and mobilizations to the “white” fringe of the democratic left, transformed in Trump’s words into “an anarchist horde”, and even a “terrorist” one. Thus are American activists against Trump and anti fascists legitimized by the popular mobilization. And what is burning, as demonstrated by images distributed world wide, also becomes a legitimate expression of this anger, in the name of oppressions and accumulated murders, of prisons mostly filled with persons of colors, of the 60 years “for nothing” since Martin Luther…

There is no way to predict the outcome of the crisis created by the live filming of George Floy’s death, added to the already deeply divided political context in the United States and the economic sequels left by the pandemic. The political system itself finds itself at fault and even an Obama is unaudible, so tied have the social and the racial questions become, finding their roots in the “revisited” story of the black cause for a mobilized youth with nothing left to lose.

One can already say that anger will be heard everywhere in the world where similar contexts prevail, even if it does not spread. Such contexts are not lacking.

Perhaps, at long last, will the religious question, meaning to say that of Islam, be set aside, at least brought back to its rightful place when speaking about the social construction of racism and its history in colonial and neo-colonial nation-States. And here, I am speaking about France.

Because if there is a slow poison acting in France as soon as the need arises to look at the consequences of colonization and the social and political construction of racism that went with it (and still persists in the official “national” history), the question of religion stands at the fore, always claiming to be its main victim, with a political Islam almost appearing as an alternative “nationalism”.

The Kurdish movement was not mistaken in this regard, and reacted promptly. One could see on social media photo montages placing side by side George Floyd, victims of Turkish police and the portrait of the murderous American policeman. And this was not out of some simple notion of moral “anti-racism”. It is well and truly the political expression of “sub-citizens” in front of a national construction which negates them, a history that erases them, a police and an army that kills them, imprisons them. The short-cut is eloquent. It even represents within Turcity itself, the economic and social role devolving to Kurds in their places of work.

In France, the long struggle of the “Adama Traoré” collective should find itself reinforced, so that his death be recognized for what it is, a direct consequence of State police violence… And it is not surprising to see Valeurs Actuelles, a French extreme right-wing newspaper titling “the extreme left dreams of importing the racial riots surrounding George Floyd”. While the same magazine dreams of “purging the suburbs”. But the ongoing shock linked to the pandemic, along with the “summer holidays” will probably delay mobilizations. By then, George Floyd’s death may be a thing of the past.

I persist in saying that the time has come to re-vitalize the “bad word” of “intersectionalism” and its struggles, while setting aside bigotted religiosity which obviously has no place in it.