Coronavirus: “It’s TV you want? Here it is!” 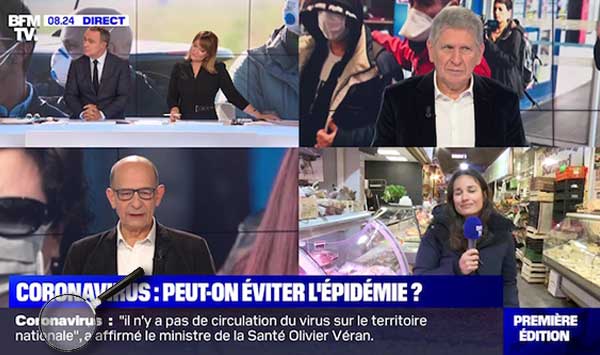 As a break, I’m allowing myself a terribly francocentric TV column, directly from the hole in which I am confined, in the middle of verdant nature, which, I am told, should preserve me from paranoia-induced confinement.

Don’t imagine that I spend my days in front of the TV. There are a thousand and one other things to do besides suckling the flat screen. However…

Taking a look at the screen, in moderation, is also a way of seeing and hearing what millions of people are receiving in their confined living room, depending on the time of day, and between their time working by computer, checking the screen on the phone or their authorized time outside. The neat part: if you missed an installment, you can find it again on twitter or facebook. Very instructive!

As a general statement, one can say that, for news stations, Covid-19 is an endless source for every type of programming. They have all kept their “talking heads”, their certified squatters, their detestable over-invited ones, their watchdogs, but they have added medical specialists. Each station fights to have the same ones and you end up asking yourself if this does not constitute a kind of online work for these “specialists”.

Just for fun, let’s give a rough description of what this can look like.

First, the official coronavirus announcement, with a dramatic presentation in the style of a “Kidnapping Alert”. It changed a bit between March and April. At first, we were given recommendations to close all shutters and barricades. In March, among the recommendations, there was no trace of the wearing of masks. And on the networks, the government’s Sandwich Billboard Lady had a good laugh over it, saying she didn’t even know how to wear one. That was the skit for March which is carnaval season, as everyone knows.

Another skit consisted of saying the magic word every hours, in all the programs. Some talking heads didn’t manage it at first: “chloro…quintet, mine, cine…” or “hydroxi chloro… wallboard… mine”. In short, the braggart with super powers to slay Covid also had his fifteen minutes of glory.

Two controversial topics had the usual comedians giving them a try, one at a time, like for those jokes people share. I won’t mention them all but from the TV screen philosophers to the liberal left-overs from the mythical sixties, through self-proclaimed night visitors to Macron, we were treated to the full gamut. They were not teleworking from home, they were working on TV.

As for the current format. Before mentioning the presence of “specialists”.

Because of confinement, social distancing and security, the screens were divided into small windows in which appeared features deformed by webcams set on too wide an angle, poorly lighted and non made-up faces. This is how we discovered what certain of French TVs watchdogs look like before makeup. They had a bit of a “my mug in the mirror on waking in the morning”. Botox must be in short supply at the moment.

But you know as well as I do that, when you can’t rely on makeup, you can count on costumes and stage props, even from a distance.

Not one of the little windows opened without a subtitled announcement of the apparition involved.

What could have looked like a Advent Calendar in March and April became an arborecence in which this one and that one’s headlines blared out as during a military parade. The “We are at war” was personified by the “President of…”, “Responsible for…”, “Member of the Academy of…”, “Co-Administrator of…”, “Chief of…”… I won’t run them all by you. More men than women of course, there are always the female talking heads on screen to lather up the war chiefs.

From time to time, in one of the squares, there appears someone pulled out of bed with his hair in a mess, being hit with a “what do you think of…” This is democratic. But it’s on an imposed topic, not a freestyle improv, or else the communication bug and the loss of signal show up quickly.

In April, it became necessary to start preparing for the re-opening of schools since the ad hoc Minister was feeling kind of useless. Not a problem, a “report” landed just on schedule to suddenly remind us that our cherished little blonde ones were not all that Covid friendly and with all risks/benefits carefully weighed, a return to benefits involved relieving the parents who had to go back to work. Here also, memorable skits are making the rounds on social networks with the usual actors mentioned above and well-known ministerial figurines.

I recommend the one by the Paris Prefect of police, in three episodes in a 30s freestyle genre. We await the new season with great impatience.

There is no point in talking about the Ministers with the 7 PM bogeyman special aligning its blood-curdling figures, nor the highly rated interventions by the President…further explained by the pedagogically impaired by Sandwich Billboard Lady, in the basence of mask, ministers or under-secretaries.

But in April, instructions are still not to mask yourself with so much as a thread, in May you can do as you so please in the matter. But most of all, don’t forget to applaud and to wash your hands afterwards.

Never before will we have seen so many “scientists” in TV studios. Science Guiding the French Broadcasting Scene.
Between those who are there to support Macron’s territory, guiding the people”with pedagogy” through the twists and turns, and those who have an opinion on every controversy, those who are fascinating (there are some, luckily) but who find themselves assailed with dumb questions and answer nonetheless, you also find slipped into the mix as if they constitute a “medical reserve” old pensioned-off egos who end up have a reserved seat on every TV station.

Meanwhile, when it comes to masking questions relative to shortages, these same TV stations, following on a presidential communication, have pulled out good old conspiracy theories relative to the origin of the virus.

Roughly, the comments were in the style of “we are not saying that… but where there is smoke, there is fire”.

Two days in April were devoted to a Chinese fart and its odor spread by Trump. I even saw a lady in the British Margaret style, presented as “a specialist on China for the young people’s magazine Senatorial Franco-Chinese Friendships” lecturing on the ravages of the Chinese communist system, so similar to those in the USSR “but that could become so efficient if only entrepreneurs take them on.” Old-fashioned anti-communist gibberish for a willfully provoked controversy. It’s TV you want, here it is.

Watching this daily manipulation of public opinion, one wonders if all the journalists have joined the sanitary reserve corps, leaving the stage to the circus of talking heads, by default.

On economic questions, serve up the same ones, put a mask on neoliberals and from one program to another, have them say that “the debt will be useful in order to avoid the crash”, on one day, “we will have to pay”, on the next, and remember that once the “crisis” will have abated, they will again take up the chorus of the previous credo… without masks.

Just try raising in the midst of all this some reflection on the relationships between emerging virus and the destruction of bio diversity, Covid and the revelation of the deadly contradictions in globalized capitalism, the fate of migrants stuck somewhere or confined to the street…All that will be swept away by the phrase: “for sure, nothing will be as it was before“.

So, when will things change on television?