Interview • Nicole Kramm, the female eye on the Chilean revolt 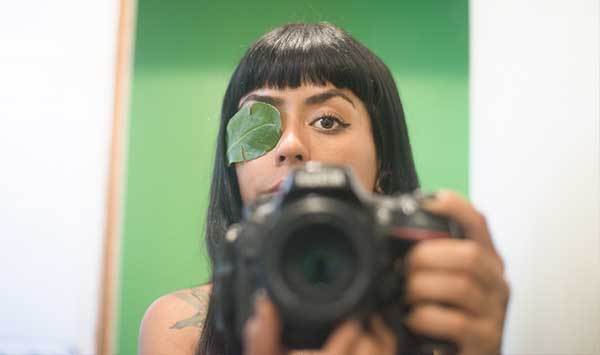 Interview with photographer Nicole Kramm, the female eye on the Chilean revolt, who was attacked by the Carabineros on the night of January 1, 2020 in Santiago, near Plaza de la Dignidad.

For a photographer there is nothing more valuable than her eyes, the loss of an eye represents irreparable damage. I am accompanied by images of the Chilean revolt that I witnessed up close.

At the moment when Nicole lost an eye, I was relating what happened to my Mapuche friends, in the commune of Santa Rosa – Le Leque.

Could you introduce yourself?

I studied journalistic photography and filmmaking, with a specialization in photography and camera direction at film schools in Chile and at the International School of San Antonio de los Baños, Cuba. Currently I work as a freelance audiovisual producer in international media.

How did you get into photography? I suppose there is a special story behind it?

I was a chemical analyst technician and only took pictures as an amateur. In 2014  I decided to travel around Latin America for two months to meet the people, I  have  always liked sociology and anthropology a lot. I always felt a duty to travel and immerse myself in other cultures. For that trip I took a pocket camera, one of those little Lumix cameras, and I recorded myself doing things in different situations, like a traveling journalist would do. Then when I returned to Chile, I realized that I didn’t want to work in a chemical laboratory for the rest of my life. So I abandoned my 4 year degree in chemistry and started to study photojournalism and received a degree in film in 2018. It was the best decision I ever made in my life.

What were your feelings and thoughts on the first day you photographed the village revolt?

When I saw and photographed the people’s insurgency in the face of injustice, I was filled with intense emotion. After many years, the people were finally rising up, tired of this system that makes our lives so precarious. It was like yesterday, when I heard through social networks about the evasion in the subway (citizens refused to pay for the subway tickets) I grabbed my things and asked some friends who were going in the subway to see what was going on and I went out with my camera.

At the turnstiles the screams were encouraging, my heart shrank as I saw how the users passed by, they told their grandparents not to pay, people smiled, we were the ones who were tired of so many years of humiliation and for the first time I felt that we were losing our fear and that a rebellion was emerging against a State that abandons us and makes us precarious.

I remember looking at a friend and commenting that it was one of the most exciting days of my life. From that moment on, we didn’t stop, marches, bonfires, meetings, assemblies, pots and pans, town halls, more barricades, resistance, repression, police and military abuse in the streets and deaths. I have seen it all, from a rebel perspective I can’t say that I don’t agree, because I validate all forms of struggle before the powerful that make us live in violent misery.

Evading, not paying, another way of fighting! Dozens of workers and students shouted as they evaded the metro in protest against the sharp rise in the price of public transport.

There is no doubt about the visual richness of the historical insurgency, which persists in an extraordinary way in resistance and is very fertile from the point of view of creation. As a photographer, how did you approach this visual integrity?

I always portrayed the people from a social point of view, angry and empowered, just as the Chilean people are. I reflected the rawness of reality with caution and harmony, I chose each situation, I observed, I approached, I searched. I didn’t want to “romanticize” the repression and violence, but I did want to embellish the resistance through sharp angles, lights at different intervals, actions, strong colors, fire, etc. Through color and powerful body language I have driven and told many stories of struggle.

The most unique feature for a photographer is, without a doubt, his eyes. What did you feel when that damned object hit your eye?

When the bullet hit me, first I didn’t understand anything, I fell to the floor, I lost my balance because of the physical pain, then when I realized that it was an eye trauma, I had blood in my left eye and no matter how hard I tried I couldn’t open it, I felt a lot of helplessness, frustration, fear and anger. The aggression was criminal, I was simply walking with my camera, through a place where there were no demonstrations. The police were hiding behind some palm trees, they saw us and fired.

Taking away the vision of one eye from someone who lives and works behind the camera is terrible, it will affect me for the rest of my life. When I assimilated the gravity and cried all I had to cry, I promised myself not to think about the people who had hurt me so much. I didn’t want to hold a grudge so as not to slow down my recovery and be able to heal as quickly as possible, physically and psychologically, so that I could return to who I am today.

What brought you back to Dignity after this unfortunate incident?

As the audiovisual director that I am, I took on the production of a documentary about the feminist movement in Chile for Aljazeera in English. Then, on the last day of shooting, I had to take on the challenge of returning to film the protagonists of this story there. I wasn’t prepared, I was very afraid, but I was never alone, many people recognized me and protected me, I received a lot of love. That motivated me to return to the streets for a few days, obviously with a lot of caution, from a different position, but with the same conviction to continue working and fighting from my communicational bunker. I will give everything to obtain justice.