March 8 • France the country of human rights in helmets 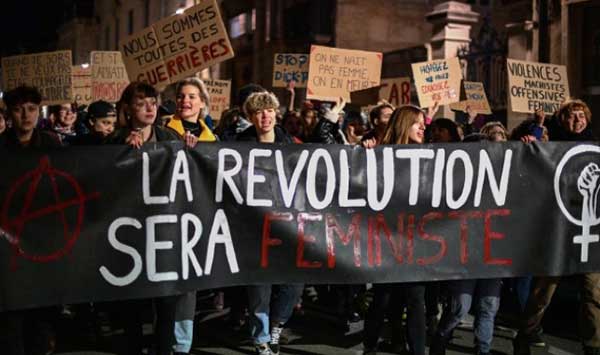 Confronted by images of women dragged by the hair or by the feet, grabbed by the waist to the point of being undressed by policemen in helmets and riot gear, the State Secretary responsible for “Equality between women and men and the fight against discriminations” declared that these women “visibly anti-capitalists”, had not “respected the course authorized for the demonstration.”

The State Secretary, Marlène Schiappa justified in those terms the blows and the gassing distributed on the demonstrators to the “World Day for the Defence of Women’s Rights”. Everyone knows that the orders came from Didier Lallement, the Police Prefect in Paris.

(We apologize for this referral to a mainstream source…)

We mention a few comments collected on social networks:

• You’re right, Marlène, every time my kid goes outside the lines in the coloring book, she gets two slugs in the face. Well-deserved.
• Marlene, you’re playing at Lili Marlene in protecting Lallement
• With Marlene, it isn’t stay in the kitchen anymore, it’s stay under the truncheon of patriarcal law enforcement

Meanwhile, comments were broadcast by the President concerning the “necessary protection of women against violences”.

All this would be laughable if it were almost a first time against an March 8 demonstration in France.

For a good while, the women’s movement had chosen to reconnect with the “night marches”, because of the noted increase in feminicides, the exponential growth in sexist violence and the growing reconsideration of rights. This is why, half a century ago, feminists had started “marches against rape”.

This March 8th occurs in a context of systematic regulating, netting and repressing of the social movement and where the number of people mutilated by the launching of “defensive bullets” or “dispersal grenades” has gone through the ceiling. 2 200 wounded, 207 of them head wounds, and at least 23 people who have lost an eye (governmental sources from March 7).

The orders of the Police Prefect are supervised by a Minister who must render accounts to his President. No one can believe – despite the fact that this Police Prefect is questioned within his hierarchy – that he allowed police violence and the obvious enjoyment of macho violences on his own accord. Besides, in other cities, as in Nantes for example, the tear gas was not in short supply either.

Some French mainstream media hailed this violence as “a sign of male/female equality from now on”, notably in these elegant terms from a journalist at the Figaro.

Henceforth, the police serves as the rampart against all opposition, a protective dyke for a political power which in France has lost all consideration for the people, through serving the specific interests of the wealthier social classes. The women’s movement is no exception to this political authoritarian drift and has just experienced this bitterly.

France, the country of Human rights, without the woman’s.

NB from Kedistan: Of course, this article is mainly aimed at the readership in Turkey where “Enlightened France” is the exact counterpart to “Orientalism” in France.