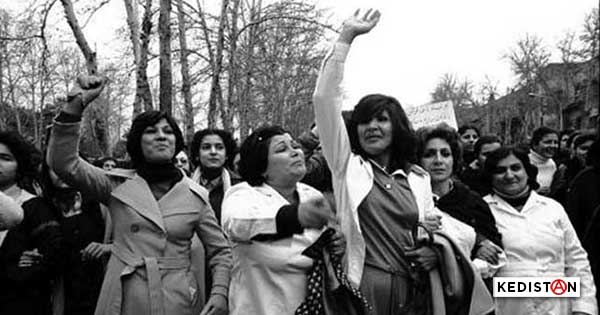 “Tanha sedast ke mimanad”, the voice is all that remains… The words come from Iran. On March 8th 2018 we, friends, accomplices, colleagues, comrades, kedis, filled with admiration and astonishment, and with fear also, we shared the video of 3 young women, bare faced with large invincible smiles as only shield, singing a feminist hymn in a subway car in Teheran.

They were holding up a black and white photo; that of the very last image, shot on March 8th 1979 of women marching bare-headed through the streets of Teheran (top image) demonstrating against the Hijab law of 1979, a law promulgated upon his return from his golden exile in Neauphle-le-Château, of the one protected and cocooned by the French government (dreadful silence from the ones in power), the one the great Fallaci (well before her delusional post-September 11 twilight described in the following terms: “he was intelligent, the most handsome old man I had ever met in my life… He resembled the “Moses” scrulpted by Michaelangelo… Despite his quiet demeanour, he represented a Robespierre or a Lenin, someone who would go very far and who would poison the world… People loved him too much. They saw another Prophet in him. Even worse: a God…What a pity that his mother did not choose to abort when she was pregnant with him.”

We will learn later that the song is titled “A woman”.

Two long years have gone by since… The world is rapidly sinking into the doldrums. Sometimes, from here or there, glimmers reach us from archipelagos of rebellion, from builders of utopias, of tremors that tear us away from our detachment, our fearful enclosures, our roguish, lazy, cowardly shutting out of the world. From those distant lands, so close nonetheless to our heart and our dreams, sparks of rebellion are sometimes born.

105 of them were executed under the presidency of Rohani (the progressive). They go on dying surrounded by indifference, in extreme solitude. The cellars of Teheran, of Shiraz, Mashhad, Hamedan, Ispahan are awful depositories of remains and of blood. “It is dark in this prison, really dark…obscurity is deep here…blood is spilled on the ground in the hallway… All of us die in this darkness…” 2excerpts from the letter for a civil rights activist upon her liberation. Yet for 41 years under the beatings from truncheons they continue to fight, to struggle against the diktat from the Theocrats.

Their demands have not changed since the days of the massive demonstrations during the Islamic revolution. They still demand civil, social and economic rights equal to those of men. And above all, they refuse to wear the veil, that rag left over from the Middle Ages that has reduced them to the sleep of the dead. (Here is a brief reminder in French of the situation of Iranian women since the establishment of the Islamic Republic). From Enghelab street, the one that witnessed all the big demonstrations against the regime of the Supreme Guide, the women offer us the face of resilience perched on benches, on platforms, at the top of electrical poles.

Recently, we found the trace of one of the subway partisans: her name is Yasamin Ariani, she is 24 years old. Along with her mother Monireh Arabshahi and Mojgan Deshavarz, she has just been sentenced to a total of 55 years of imprisonment because, shining faces and heads uncovered, they had distributed flowers in the Teheran subway 3The latest information indicates that the sentence has been revised to 31 years of imprisonment for all three women. Mohamed Moghireh is the name of the judge who pronounced the sentences. He is known for an infamous other sanction, the one that catapulted lawyer and civil rights activist Nasrin Sotoudeh into a sentence of 38 years in prison and 148 strokes from the lash.

Last September 19, the European Parliament voted a resolution in favor of Iranian women condemning the violation of their rights. Unfortunately, we all know that the fate and the suffering of female Iranian political prisoners will not be relieved through some action by international bodies. Women will continue to disappear into Iranian jails, often accompanied by young children, suffocating in their pain, their cries, their anger and their indignation. We cannot provide here a full list of all the names of women victims of the regime, unfortunately, that tlist is much too long. There is Zeineb Jalalian, Neda Naji, Narges Mohammadi, Aena Daemi, Golrokh Iraee, Sima Entesari, Sepideh Qoliyan, Parisa Seifi, Vida Mohavedi, Mariam Jailili, Mahvash Shariari Bahit, Haineh Sane Farashi, Mahboubeh Karami, Niloufar Bayani, Sepideh Kashani, Marjan Davari, Sareh Mihmani, Mayram Akbari, the members of the feminist collective Neday-e Zanan…

Today, February 21, the Iranian people are called to the urns for the legislative elections. Here is the communique prepared by 12 women, political prisoners locked up in the sinister jail of Evin in Telehran, calling on a boycott and a rejection of said elections.

For more than 5 years, they have attempted to obtain votes for their autocratic regime by repeating the word “elections”.

From the first day on which the Assembly of experts replaced the constituent assembly, the Iranian people’s free elections, right to sovereignty and free elections has been usurped and stolen.

The Islamic Consultative Assembly was formed following the elimination of every political group except the close circle of totalitarian tyrants and every year, the circle has become more restricted, even self-destructive and against the Iranian people. It serves the sovereignty of the anti-population, that is its only function.

The Public no longer wants to play their game. Today, the tyranny of the “Islamic Republic” has reached such a point that there is fear of a general boycott of the governmental elections and injunctions follow one upon the other, inviting people to the urns as if the head of the judicial body were threatening that “whoever questions the election is an enemy of the system”. But the Iranian people gave their true and irreversible vote in the bloody November uprising – there and then, in the streets. In the protests, the strikes and not as the reformists would wish, in a politically controlled process.

This system and its elections do not provide an answer for the blood shed by millions of young innocents: the massacres of decades, particularly, the summer massacre, the serial murders that went on for decades, the bloodshed in Khatun, Abad, Islamshahr, etc…

The demonstrators, the atrocities committed in Kahrizak and the massive executions of Kurdish citizens in Iranian prisons, the murder of demonstrators and, finally, the brutal murder of thousands of persons in November; the Iranian people do not allow a single ofther drop of that blood to be unjustly shed in protests and the suffering of the people against despotism.

The future never was and never will be for those who submit. All the defendors of the Islamic rules are pawns of women’s enemies and support the ones responsible in government, those who bow their heads and unjustly accept the pursuit of the rule, they are vicious and viciated – be they grand experts and those who appear at the National Assembly!

It is up to us to leave them to their elections among themselves and to stay clear of these elections.

Those who go to the urns will have blood on their hands just like those who opened fire on youth and will be accomplices of power and its crimes.

The boycott and the rejection of the election is the Iranian people’s treaty with its martyrs, in particular the martyrs of the recent uprising. 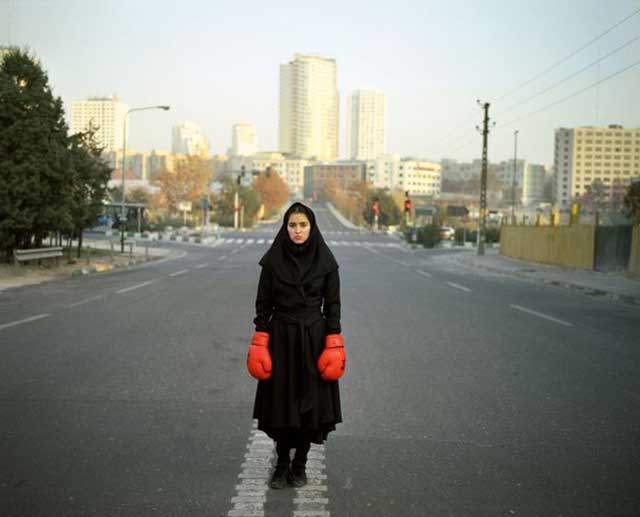 With a brief wink from the dismal comfort of our ignorance, we have chosen to commemorate those women, the magnitude of their action, the defiance in their eyes, the dizzying momentum of their revolt because the final bastion, the final territory facing the abyss is the assurance in their voices, voices that pierce through the dark galeries in an ultimate gesture of dignity and temerity. Because nothing but the voice, nothing but the voice remains.

* As usual, Kedistan will not attempt to provide the translation of a poem from its initial translation from the original. Poetry follows its own rules in which meaning, sound and rythm all have their own roles to play. Instead here is a link to a few other poems by the Iranian Forugh Farrokhzad in ‘official’ English translation)