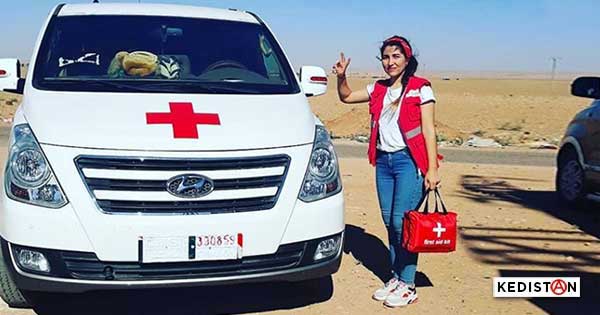 We met with Zozan Samî Mis­te­fa, a young doc­tor – one of the rare ones – present all the way to the front­lines where the war begins and where life becomes a ques­tion of resistance.

What brought you to exer­cis­ing as a doc­tor in the mid­dle of a war?

Because my job is sav­ing lives. Here, this is my land, my home and these are my peo­ple, and because I could­n’t just stand there and watch these ter­ror­ists come and kill our children.

They have killed our exis­tence and this is a sec­tar­i­an eth­nic war, not only against the Kurds but against all of soci­ety in Roja­va. Because we have already paid a toll of 11 thou­sand mar­tyrs in order to live in peace.

I am no bet­ter than this girl or that boy who pick up their weapons and head for the front­lines. They love life, but they love their coun­try even more…just as I do.

What do you see every day? Can you tell us about this ter­ri­ble war?

Every day, I see a tragedy tak­ing place before my eyes. I see chil­dren assas­si­nat­ed. I see women who were raped. I see many fight­ers with muti­lat­ed bod­ies. I see moth­ers cry­ing over their chil­dren. I see peo­ple, both young and old, who have lost their limbs.

War crimes are being com­mit­ted. As a doc­tor, I’m called upon to treat burns and I have seen that the Turk­ish army is using weapons for­bid­den at the inter­na­tion­al lev­el. I have seen white phos­pho­rus on the bod­ies of the wounded.

What event struck you the most in your work as a woman doctor?

I saw a lit­tle boy of less than nine years who had lost both legs fol­low­ing artillery fire by a Turk­ish tank. When they evac­u­at­ed him and brought him in, he was cry­ing and scream­ing, and look­ing up to the sky, say­ing: “Why God, why did you let all the crim­i­nals in the world come on our land, why must we fight all the ter­ror­ism our­selves, oh God who will give me back my legs, I want to play soc­cer. How can I play soc­cer now? How?” And his old­er broth­er who was no more than eleven kept repeat­ing: “Broth­er, I’m your sup­port. I’m here, moth­er and father will always be here for you also, they’ll come to the hos­pi­tal soon and help you too”… But they did­n’t know that their par­ents had also died! Yes, I will nev­er for­get that scene that played out before my eyes.

To the world, to the West, to women… what would you like to say?

I want to say that we are human beings just like you, we have our own lives, our own plans, we have our fam­i­lies and our tra­di­tions, we have our feel­ings, we love and we hate, we share anger and sad­ness. We also have souls just like you, we are not con­tain­ers of black oil over which you argue and launch all your wars against us. The earth is big enough for every­one. Let’s live in peace. And I will say to all the women in the world that the fem­i­nist move­ment began in Roja­va in order to prove to the while world that a woman can be a leader, a moth­er and a sol­dier all at once, and say to the whole world that women are strong and that those who attack our land are sen­tenced to die.

Rossella Assanti, activist and freelance journalist specialized in Kurdistan issues. She believes in truth as a means of making justice win. Travel so that his pen becomes the voice of those who are silenced.