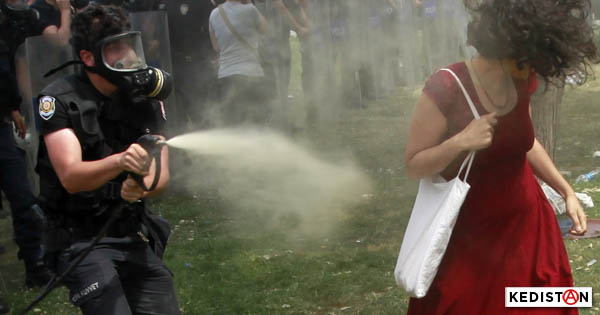 I know, this image is not from France. It is the one of the woman in red, an image symbolizing the Gezi uprising in Istanbul in 2013, the year where I battered so many pots and pans by beating on them.

It’s because I saw so many images go by today on the blue bird, all of them French this time, of policemen hitting firefighters’ helmets that I couldn’t miss the comparison, including the streams of water.

So it seems your French firefighters are getting the terrorist treatment?
Our Reis is going to make fun of your boss Macron again. Raise a rallying cry against the red truck!

I wouldn’t be surprised if Trump added his little tweet all to the glory of those in New York. He’s in an election campaign and likes to tease.

I must say that, these days, we would envy you your firefighters a bit. Following the earthquake, we could use them. If France is scrapping them, we’re takers.

To think we were complaining about our violent policemen throwing grenades and streams of water!

I seem to understand that the “social climate” in France is on red, water and tear gases, like in Turkey in 2013. Beware, what followed over here was a form of dictatorship, following the treason of our fine Kemalist opposition.

Since then, we can always call on the firefighters but nobody answers.

I don’t wish to insist, but when you reach the point of hitting on those who save lives every day, it must mean there’s a bug in the fine country of Human Rights.

How then can we expect any kind of help from it in ridding ourselves of our Reis? My impression is more that France will call on him as a specialist, to help in settling the “troubles”. He can explain to President Macron how to set up his parliament so he can have laws adopted without a hitch.

France, beware, if your President also wants to revise the constitution in order to adapt it to modern times. Don’t put away the red flag, and pull out the black one too.