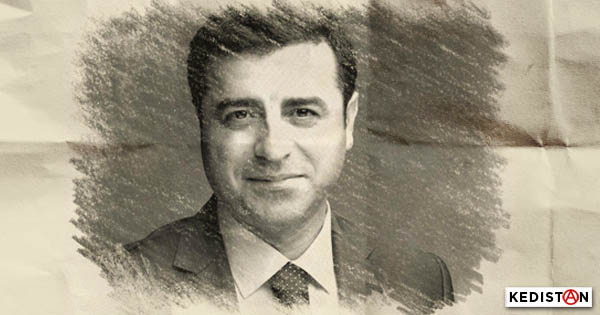 The former Co-President of the Peoples’ Democratic Party (HDP) participated in the hearing from the Type F prison where he is jailed in Edirne, district of Sincan via the SEGBIS videoconferencing system. He was arrested on November 4th 2016, along with many other members of his Party, then jailed.

He is at risk of 142 years in prison for terrorism. Among other things, he is accused of founding and leading a (terrorist) organization. The indictment rests on 31 inquest statements submitted to the Turkish Parliament during his mandate as Deputy, in order to obtain the lifting of his parliamentary immunity.

Paradoxically, the tribunal had revoked this arrest warrant against Demirtaş following the hearing on September 2 2019. But, as he was sentenced to more than four years in jail in another case, he was not freed from prison.

This hearing was about the trial described as “the main trial” in which Selahattin Demirtaş was supposed to be heard as a free man, according to the prosecution’s decision. But since his captivity was maintained and all the files were being examined by tribunals in different towns, he must defend himself via videoconference. This is the case for many political prisoners subjected to deportation toward prisons far from their homes and from the tribunals hearing their case.

Today, the presiding judge declared that the translation of the decision pronounced by the European Tribunal of Human Rights for violation of Selahattin Demirtaş’ rights had indeed been added to the file.

As for the indictments in the other trials previously opened against him in Istanbul, Ankara, Adana, Erzurum, Elazığ and Mersin, they were added to the “main” file. The defence lawyers therefore asked for a supplementary delay, in order to prepare the defence on these elements since they are being considered anew. One of these pieces of evidence concerns a photograph of Demirtaş, taken with PKK leaders in Qandil, during the “resolution” period. Which is to say, in total legality, since it dates from a period when the Turkish State itself was sitting at the table with leaders of the organization, negotiating in order to find a solution to the “Kurdish question”.

Intervening lawyers criticized the fact the defence concerning these other files was considered to have been already “completed” and pleaded during the preceding hearing on September 2. They asked that this consideration be removed, in conformity with the principle of an equitable judgment. Lawyer Mehmet Emin Aktar recalled that the document deposed to justify their absence at the trial had been unjustly rejected by the tribunal. The judge answered: “We learned of your absence through the media on internet”. The lawyer then replied “And we had read on Anadolu Ajansi (State news agency) while Demirtaş’ interrogation was still ongoing, that he was incarcerated!”

Concerning the defence treated as “completed” on the other files, Demirtaş announced “I will pursue my defence. I also hope that you will not limit my right to a defence. If you intend taking a decision without asking yourselves what the accused thinks about 5-6 indictments, this would be an extremely serious situation. But if you render a verdict according to which it was decided to silence Selahattin Demirtaş, I will be silent. In the opposite case, I will not be silent, I will speak.”

Curtain drawn on the documents

Lawyer Aygül Demirtaş then mentioned that, according to the judge, some twenty documents “would be” added to the file. “We consulted the file no later than yesterday, those documents were not available yet. You hold on to the file as if it were your monopoly. As lawyers, we cannot access documents filed in the indictment. That is also a violation of the principle of an equitable trial.”

Demirtaş underlined that the fact the documents submitted to the court were hidden being contrary to the principle of an equitable trial, proved there was no longer a judiciary system in Turkey. “Our arrest provided further proof of this. The arrests of other opposition activists, of defendors of human rights and of journalists pursue this same objective, as does the closing down of opposition media, under the excuse of an attempted coup d’Etat.”

Vaudeville for the observers

A number of observers have followed the hearing, including politicans from the HDP, the CHP (People’s Republican Party) and SKYP (Socialist Reconstruction Party). A delegation of Lawyers without borders, led by Swedish lawyer Per Stadig was refused access, for “lack of accreditation”. Lawyers Per Stadig and Stende Geer had come from Sweden to observe the hearing. However, they were not authorized entry into the jail in Sincan where the hearing was to be held. Some five hours later, the Council of judges decided they could come in, long after the two lawyers had left the campus after declaring they had come to Turkey on several occasion in the past to observe hearings and had never encountered such a situation.

Selahattin Demirtaş spoke: “There are allegations about the fact the motive for the arrest is political and that each step in the judgment is carried out with the same motive. The aim here is not to render a judgment. It is a meeting organized so that the AKP’s power objectivess, and particularly those of its President Erdogan, may come to fruition and the opposition be liquidated.”

As for the decision rendered by the European Tribunal of Human Rights, “In Strasburg, during a hearing held before the judges of 17 countries, I am not the one who was being judged, but your verdicts were. Over there, the verdicts were those of all the members of justice taking part in this process.”

Concerning his recent health problems, Demirtaş declared: “Had my health allowed I would have been present in Ankara, but that was not possible. I was taken to the hospital on three occasions. Examinations are ongoing. Following a treatment, there will be further examinations. The electrocardiogram revealed that my heart was clean. I told the doctor “I know, I have a clean heart” (said laughingly). The doctor suggested I change my lifestyle. Prior to the medical visit, I walked from left to right in the prison quarters, now I walk from right to left…”

Demirtaş underlined the fact the AKP has built a structure within the State that is even more deeply linked to it, and more dangerous than it was before, that this orgnization extends its tentacles to the judiciary, the media, businesses and politics, and the the Communication Directorate at (Erdogan’s) Palace is at the epicentre of the media tentacle. “I am stating this so that it may be inscribed in History. When the State of Law exists once more, a prosecutor will document all this and bring it to everyone’s attention. Among them, some will repent.”

The trial will continue… 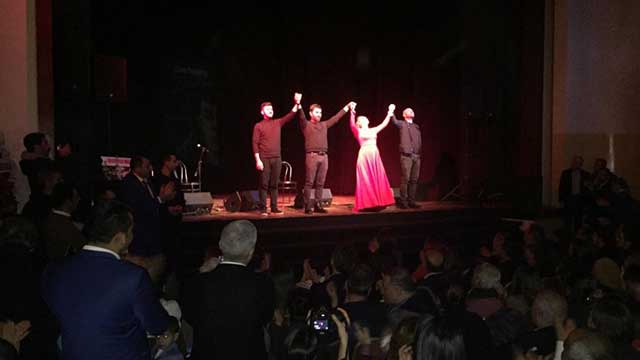 Speaking of theater… the real kind

A few days later, on January 10, a play was staged in his honor, inspired by Demirtaş’ book “And the wheel will”, (Devran in Turkish). The play was presented for the first time as a reading by actors Jülide Kural and Ömer Şahin at the Kenter Theater in Istanbul.

“And the Wheel will turn” is a collection of nine short stories written by Demirtaş and published in France under the title “Et tournera la roue” by Editions Emmanuelle Collas. Fictional stories each having a different narrator, the collection deals with such themes as justice, crime and Kurdish oppression – with the collection centering around a young man who lost friends during the curfew the government imposed on Cizre in 2015.

Selahattin Demirtaş’ companion, Başak attended the reading. Among figures in the audience: Selvi Kılıçdaroğlu, companion of CHIP’s President, and Dilek İmamoğlu, the companion of Istanbul’s mayor. Canan Kaftancıoğlu, President of Istanbul’s CHP was also present. Among others, HDP deputies Hüda Kaya, Filiz Kerestecioğlu (CHP Istanbul), former HDP deputy Sırrı Süreyya Önder, and former CHP deputy Barış Yarkadaş. The mayor of the Prince’s Islands Erdem Gül and actor Kadir İnanır were also in the hall. Kedistan would love all of them to increase their support further…

As for the Minister of the Interior Süleyman Soylu, he was furious and could not keep himself from commenting on the initiative and on the audience. Recalling the events in Kobanê 1, in his own way. As an epilogue, he cried: “They burned down and destroyed everything. They massacred 39 people. The PKK was the one who ordered this. This order was brought to Turkey by Selahattin Demirtaş who was then Co-President of the HDP, and the members of their governing board. Selahattin Demirtaş writes a play. And some people stand before it and applaud. Your work was unfinished, Mister Kadir]. You missed an opportunity, all of you who went to that theater. You should have hung on the wall of this theater the photo of Yasin Börü who fell a martyr. You should have hung up the photos of the 39 people who were massacred. You cannot cleanse the blood from your hands with a theater play! You cannot deceive this Nation. You will not manage to divide this country. You will not be able to travel abroad, and you will not manage to destroy the serenity of Turkey with persuasions whispered in the ear. Turkey is no longer the old Turkey.”

Thus, the theater of injustice continues playing its favorite act and its decorum persists with, on occasion, a curtain call.

(1) The events in Kobanê: When ISIS occupied Kobanê, Selahattin Demirtaş, then Copresident of the HDP, requested the opening of a humanitarian corridor on September 27 via the Turkish borders and a possibility of transferring weapons in other Kurdish cantons toward Kobanê, as reinforcement for the YPG facing ISIS. The request was reiterated also by Salih Muslim, leader of the PYD. Despite urgent calls and talks, the government did not authorize the corridor. Demonstrations were held in protest beginning on October 6, despite a declared curfew. The HDP then also published an appeal to the populations already experiencing difficulties while fleeing from ISIS. Police and military interventions by Turkish forces followed, with reinforcement by nationalist civilians, sympathizers of HÜDA-PAR and the grey wolves. Protests extended to the entire country. According to the Association for Human Rights (IHD) between the 7 th and the 12th of October, these events caused the death of 46 people, 682 were wounded and 323 were arrested. In 2015, Ankara Prosecutor’s Bureau for Crimes against the Constitutional Order launched a trial against the HDP’s board of governors on the charge of calling for protests.↩