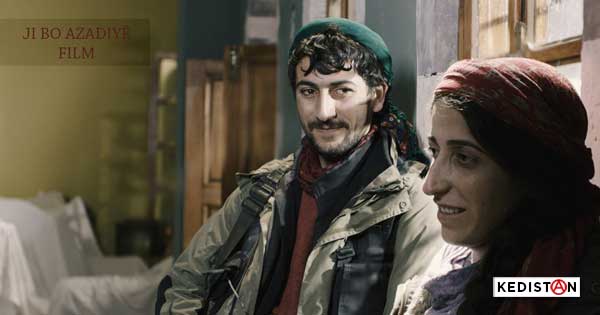 “Oxir be Rubar, oxir be Servano!” (Rest in peace, Rubar, rest in peace you, the combatant) Kurdish film director Ersin Çelik wrote on his Facebook page on November 3 2019. Below the message appear photos of a charismatic young man with a smile on his lips but serious eyes. One of the photos shows him in the garb of a PKK combatant while another was done during the filming of Ji bo Azadiye – The Ending will be spectacular, a work of fiction released in 2019 that relates the resistance in the Sur neighborhood of Amed (Diyarbakir) in 2015-2016 under attacks by the Turkish army attempting to exterminate activists who had declared the rule of self-government. 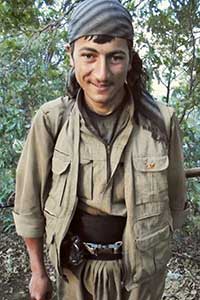 A combatant turned actor for the role of a guerilla leader in Sur, before falling as a martyr on October 25 2019 next to four other combatants in confrontations with the Turkish army, Rubar Shervan’s story intrigues. We asked Ersin Çelik to tell us more about him.

« Rubar Shervan (Cihan Sever) is from Van, one of the coldest towns in Northern Kurdistan (Bakur, a part of Kurdistan occupied by Turkey). He left this icy region for one of the warmest regions of Kurdistan, led by a passion, a feeling and an objective. He came to Kobanê in 2014-2015 in order to fight against ISIS, something he never stopped doing in Rojava and in Northern Syria up until our meeting. I know he was wounded several times.

We met in Kobanê in 2017 when preparations for the film were already underway. We were looking for amateur actors because we wanted to capture authentic emotions with people as close as possible both to what had happened in Sur and to the subjectivity of the young people who fought there. We were thus convinced that only people who had lived similar events could interpret this story. Thus, the actor interpreting the character had to be as close to him as possible in real life.

This was no small matter. There were very intense confrontations going on, the war against ISIS was still raging in Raqqa. We were a group of film makers, journalists and individuals dedicated to the project and we were actively working on writing the script, scouting for actors and re-creating the architecture of Sur in Kobanê. Sur is a town built with black stone characteristic of its region, with walled-in narrow alleys whereas more than 80% of Kobanê had been destroyed.

We were preparing a film, while already living one: we had planned to use a group of SDF combatants in Sheddadi but they were called up to the front at the beginning of the operation in Deir ez Zor since priorities were elsewhere. Kahraman Amed was supposed to play a role in the film but he fell a martyr in Raqqa a few days before filming began. Film maker and journalist Mehmet Aksoy also fell a martyr in Raqqa during an assault by ISIS.

During the initial preparatory phase we had never distributed the roles because we were busy organizing and training for the crew. This lasted for three months and dealt with the different aspects of cinema including theory, criticism, and drama classes. At the end of this training, we started work on the scenario and rehearsals for some of the key scenes. This is when the casting became more precise. As this was a film done by a collective, it was important that the two-person teams in the scenario be complemenary and, as I said, it was important that some of the characters’ characteristics meld with the actor’s personalities. 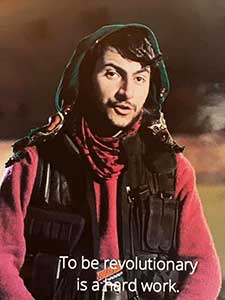 The first time I saw Rubar, I told myself he was the one, and my opinion did not change during the three-month training period: he could play of the main roles, that of Çiyager, the leader of the resistance during 100 days in Sur-Amed from December 2015 to March 2016. Rubar’s heart was a light as a feather, he was extremely modest and always optimistic even when dealing with difficulties. He smiled all the time and all eyes turned toward hm when he entered a room. His attitude was impressive. In short, he had all the chartacteristics of a revolutionary leader. He was exactly the way Çiyager was to be interpreted.

At first, he wasn’t too keen about being in the film. He considered this wasn’t his role, that he had no theater or film experience. So he had to trust himself, and us.

But it is admitted among politically-aware Kurds that participating in the Sur resistance is an honor, just as is the case for resistance in Kobanê and Shengal. Living or dying isn’t what matters, what matters is honor, resistance, freedom and the intimate conviction that revolution is not a dream. In short, one must be convinced that a new life is possible. And like many others, Rubar had that conviction. For every revolutionary, life takes on an artistic and poetic dimension. Only poetry and art can tell the tale of the journey from a region where snow lies more than 2 meters deep to one where summers are scorching hot. Only revolutionaries can take on the title role in a film while fighting against ISIS, the most organized evil on earth. This is how Cihan became Rubar in Kobanê and played the role of Çiyager in the film Ji bo Azadiye.

Of course all these ingredients could not suffice because a film is a long and complicated technical process and few people manage to see the film behind the scenario, along with the camera, the light, the crew, the audience. Amateur actors have a hard time getting accustomed to all these aspects, especially when you need to make several takes. We managed to finish the movie nonetheless and it is truly a film, even though it rests on real events. But reality is everywhere in it. Two of the actors (Korsan Servan and Haki) for example fought in Sur and we made sure that they played their own roles. It’s an important detail in the history of cinema. Rubar Shervan for instance wondered if he would be able to interpret Çiyager. 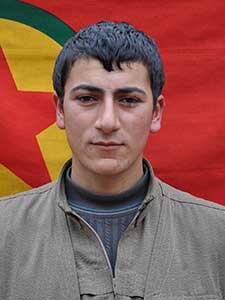 Our film deals with a process that is still ongoing and fresh in everyone’s mind. Ruber felt this was not an ordinary movie and that he he would marked for life by this role.

My role as director was to maintain everyone’s motivation and to prepare the emotional climate before and after the takes. This was not sufficient because, at times, actors had to repeat the slightest gesture. But everyone had entered into the project telling themselves they had to give it their best. We kept saying “we can do better.” With this state of mind we managed to overcome the lack of motivation that could appear after several takes. We forbade ourselves the thought that we did not need to be as demanding in these conditions, with actors and a crew lacking in sufficient experience for such a project. We are amateurs but we attempted to think and to act as professionals. Rubar trusted us as an actor, he took our request, criticisms and advice under consideration. He took part at a heavy cost.

Preparations lasted for three months and so did filming. Rubar had scenes right up to the end, including the hardest ones. There was no extravagance, no exaggeration in this film, but the telling of a true, authentic story. Our actor comrads thus went on a diet to lose weight, they remained dirty and with uncut hair, and Rubar did all this without any qualms. He left the set in March 2018.

We had last seen each other during the summer of 2019 when I showed him a first version of the film with temporary editing, after which we lost contact until news arrived of his death on November 2. From what I gathered from the media, he died a martyr under bombing during a confrontation with the Turkish army in Haftanin. He lived in righteousness. He loved life to the point of sacrificing it. Our duty is to keep his memory alive. » 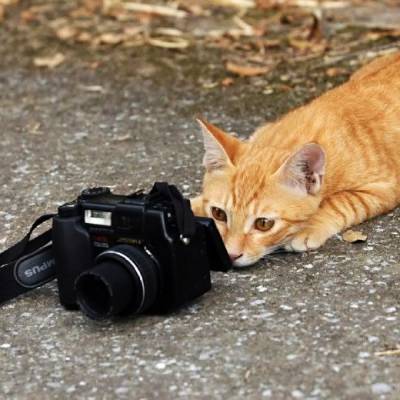