The great march • Day after day… 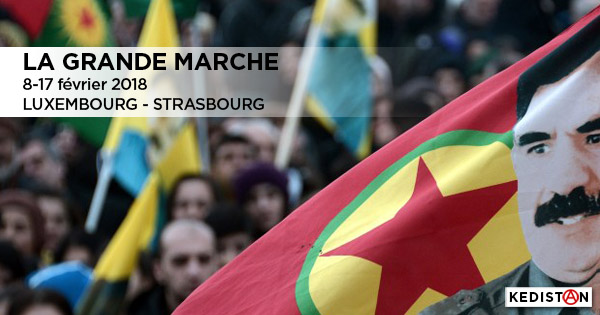 The “Freedom for Öcalan and for all political prisoners” Committee is organizing its second march which will last ten days, from February 8 to 17 2018. Kedistan will report on it through the words of French-speaking participants.   Follow this publication for regular updates.

The great march for the liberation of Abdullah Öcalan began this morning.

Following a press conference in front of the European Court of Justice in Luxemburg, some hundred internationalist walkers representing some fifteen different nationalities in Europe, Latin America and the Middle East headed for their first stopover.

They were subjected to a strict control of their papers by local police and gendarmes at the French border. Once again, the fight for freedom and an end to massacres in Kurdistan is confronted by illegitimate suspicion in France, a country that should rather acknowledge the blood shed by the Kurdish fighters and the Syrian Democratic Forces against ISIS and the obscurantism in this region and across the world. Once again, we see in this the persistent French and European hypocrisy in the silence and the criminalisation which allows a fascist Turkish regime to perpetuate its genocide.   Tomorrow, we the marchers, will continue our march, determined to break this silence! 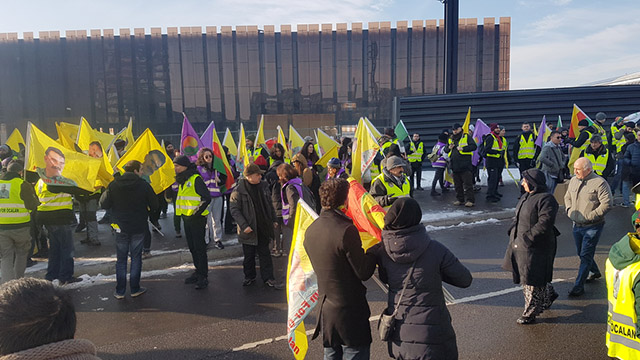 After the meeting at the Grand-Duché, the marchers left Luxemburg on foot…
Crédit photo RTL5′ 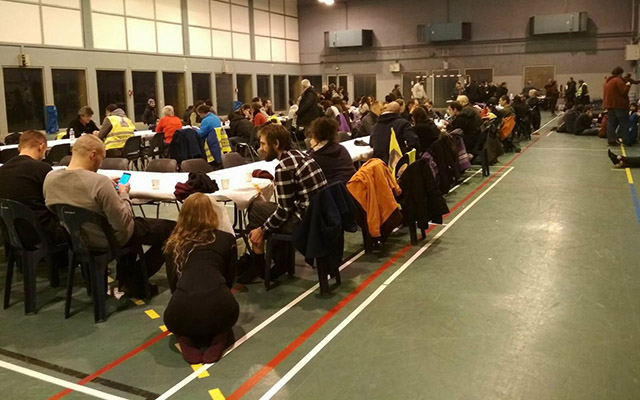 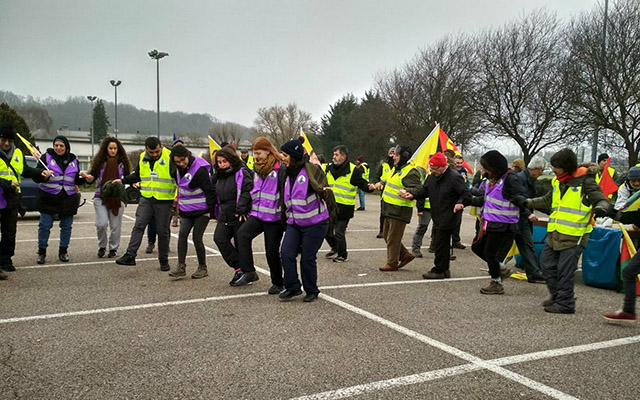 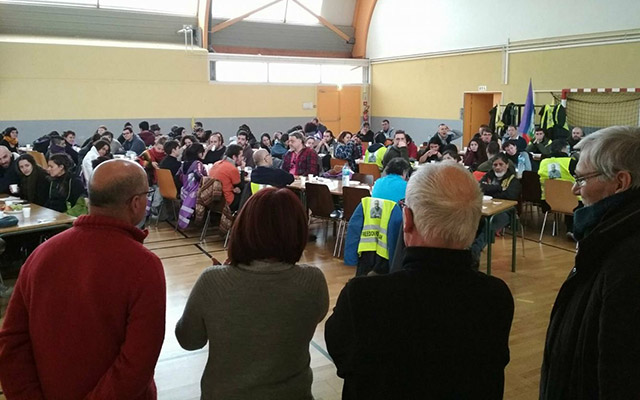 The marchers left Thionville in a southerly direction.

After receiving an encouraging message from the YPG, they were greeted by the mayor of Guenange.Ten communes are now taking part in the great march, each with a number and a specific name. Following an initiative by the French women, one of the communes bears the name of Sehid Kemal-Serhat Nicolas Akyol. These internationalists dedicate their march to this young fighter, felled in the mountains of Kurdistan, fighting for a just world and the hope for a new future for all of humanity. 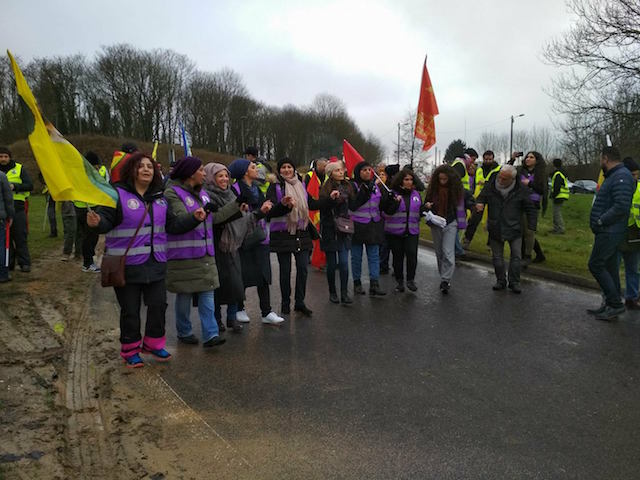 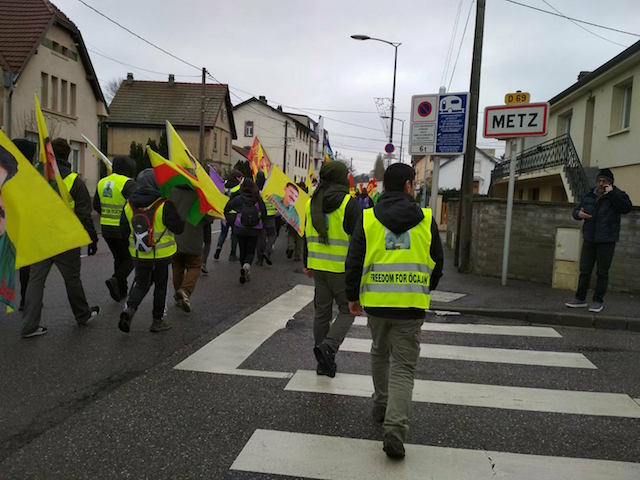 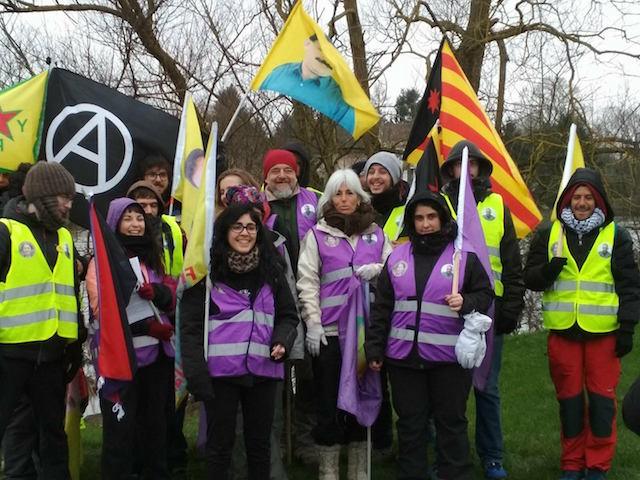 The third day of the march for the Liberation of Öcalan took place between  Talange and Pompieres (Moselle).

Six brief provocations by Turkish fascists took place on this part of the march, but with no serious consequences. We note good reactions by passers by, all the way to sympathy and sincere support.

This afternoon, the Kurdish television sterk transmitted a direct and simultaneous program on the demonstration in Paris, the European mobilizations for Afrin and images of the internationalist marchers. This media as well as çira TV have journalists at our sides daily.

We are about to participate in the first seminar organized on the march’s route. The purpose being to share alternative experiences from our respective countries.

This morning, the internationalists began with a seminar on the struggles in their respective countries and regions.

It is snowing on Talange but nothing stops the marchers. Neither wind nor sleet keep them from marching on toward saint Avold, where they will spend part of the night. Slogans and music resonate in several villages all through the afternoon, which gives an idea of their determination.

This evening, the presentations continue and the mood is to dancing. As is often the case, concerts are expected. The departure for Switzerland will take place during the night. 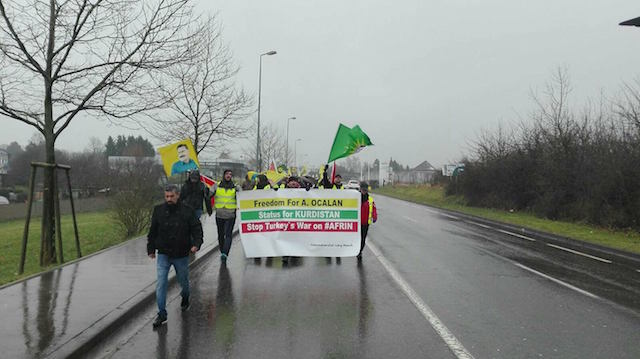 Bravely, in the rain 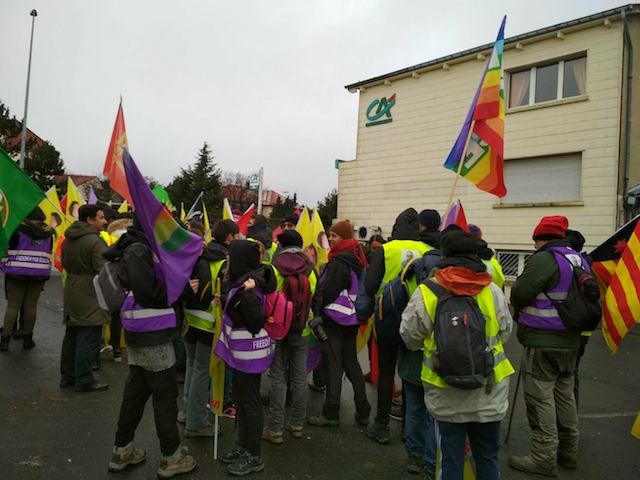 But always with a good morale

Fifth day. 8h00. Arriving in Lausanne, the bus is greeted by many comrades from the Kurdistan cultural center. A press conference is orgnized in front of the building where the Lausanne agreements were signed in 1923. 22 representatives of organizations speak before the cameras. Among them, the pyd, the Swiss ecological party, a local elected member, the Kurdish women’s movement in Europe…

We are one thousand marching today across the Swiss town along the lake, and through the very comfortable neighborhoods in the periphery.

The evening will be short because a great cultural exchange occurred the day before. Indeed, we were presented with traditional songs and dances from many countries participating in the march. The evening was festive and prolonged…

The march will continue gathering all those who will join in depending on the areas it will cross, on the road from Luxemburg to Strasburg, to end in front of the European Commission and the European Committee for the Prevention of Torture.