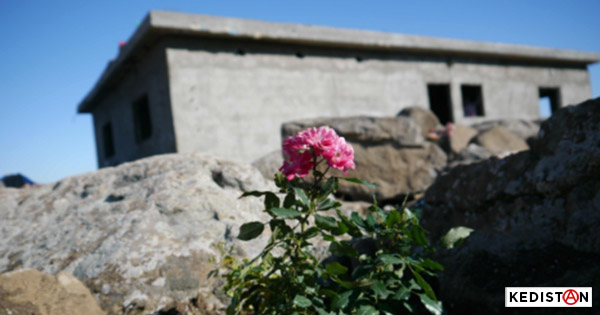 Internationalist Commune of Rojava: Presentation of the campaign in cooperation with the Democratic Self-governance of Northern Syria.

Five years have passed since the beginning of the Rojava Revolution. Beginning with the heroic resistance of Kobani, the YPG/YPJ have pushed the reactionary gangs of ISIS back again and again. At the same time, the people of Rojava have successfully resisted all hegemonical attempts to corrupt the revolution. Inspired and shaped by the ideas of Abdullah Öcalan and the struggle of the Kurdish freedom movement, Rojava is a revolutionary project with the aim of challenging capitalist modernity through women’s liberation, ecology, and radical democracy. Despite the ongoing success of the Rojava Revolution, the people remain under pressure; the war against ISIS, the daily terror attacks by the Turkish state and the economic embargo, are obstacles for building up a new society. In this situation, Rojava needs worldwide support more than ever.

For many years, we, internationalists from all over the world, have been working on many facets of the Rojava Revolution. Inspired by the revolutionary perspective of the Kurdish freedom movement, we are here to learn, and to support and help develop existing projects. It is our aim to organize a new generation of internationalists to challenge capitalist modernity. Supported by the youth movement in Rojava (YCR/YJC), we established the Internationalist Commune of Rojava in early 2017. To date, our projects have include organizing educational activities, delegations, language courses, and the construction of the first civilian academy for internationalists in Rojava.

A pillar of the revolution: ecology

People who are alienated from nature are alienated from themselves, and are self-destructive. No system has shown this relationship more clearly than capitalist modernity; environmental destruction and ecological crises go hand in hand with oppression and exploitation of people. The feckless mentality of maximum profit has brought our planet close to the edge of the abyss, and left humanity in a whirlwind of war, hunger, and social crisis. Because of this, developing an ecological society is a pillar of the Rojava Revolution, alongside women’s liberation and a total democratization of all parts of life. This is about more than just protecting nature by limiting damage to it; it is about recreating the balance between people and nature. It is about a “renewed, conscious and enlighted unification towards a natural, organic society” (Abdullah Öcalan).

The results of the capitalist mentality and state violence against society and the environment are clearly visible in Rojava; the Baath regime was and remains uninterested in an ecological society throughout all of Syria. The regime always focused on maximum resource exploitation and high agricultural production rate at the expense of environmental protection, especially in colonized West Kurdistan. Systematic deforestation made monoculture possible: wheat in Cizire Canton, olives in Afrin, and a mixture of both in Kobani have altered the landscape of Rojava. For several decades it was forbidden to plant trees and vegetables, and the population was encouraged by repressive politics and deliberate underdeveloppment of the region to migrate as cheap labour to nearby cities like Aleppo, Raqqa and Homs. Energy production and use (fossil fuels), senseless waste management policies, and careless over-reliance on chemicals in agriculture, damaged the ground, air and water. But the Rojava Revolution and the Rojavan people struggle not only with the ecopolitical heritage of the Baath regime, but also with the ever-present and grave threat of the hostile policies of Turkish State. Beside military attacks, the constant threat of an invasion, and an economic embargo, we also face the problems caused results by Turkish goverment dam construction in occupied North Kurdistan, and the consequent uncontrolled use of groundwater by Turkey for its agriculture. This aggressive siphoning reduces the flow into Rojavan rivers and lowers the whole region’s groundwater level. We are witnessing how Turkish State is systematically
closing Rojava’s water tap.

Between war and embargo – ecological works in Rojava

The attempts of the Turkish and Syrian regimes to strangle the revolution in Rojava by military, political and economic attacks, the war against ISIS, and the embargo, supported by the South Kurdish KDP, are creating difficult circumstances for ecological projects in Rojava. Although there are many current projects, including reforestation, creation of natural reserves and environmentally-friendly waste disposal facilities, the infrastructure of the Democratic Self-Administration is still in a difficult material situation, making these goals harder to achieve. The projects of most regional committees are either just beginning or in the planning stage. The ecological revolution, within the larger revolution, is still in its infancy. It lacks environmental consciousness among the population, expert knowledge, necessary technology, and a connection to solidarity from abroad.

Our contribution to the ecological revolution: Make Rojava Green Again

We, the Internationalist Commune of Rojava, want to contribute to the ecological revolution in Northern Syria. To this end, we have started the campaign “Make Rojava Green Again”, campaign in cooperation with the Ecology Committee of the Cizire Canton. The campaign has three aspects:

1. Building up the Internationalist Academy with an ecological ethos, to serve as a working example for comparable projects and concepts for the entire society. The academy will facilitate education for internationalists and for the general population of Rojava, to strengthen awareness and environmental consciousness, pushing to build up an ecological society.
2. Joining the work of ecological projects for reforestation, and building up a cooperative tree nursery as part of the Internationalist Academy.
3. Material support for existing and future ecological projects of the Democratic Self-administration, including sharing of knowledge between activists, scientists and experts with committees and structures in Rojava, developing a long-term perspective for an ecological Northern Syria Federation.

The first two concrete projects of the “Make Rojava Green Again” campaign are:

The collective work in the nursery will also be a part of the education in the internationalist academy, as well as a concrete expression of solidarity with the communes, institutions, and structures of the population.

‘Make Rojava Green Again’ as a bridge for internationalist solidarity

These are some of the ways people can support the the campaign ‘Make Rojava Green
Again’, the ecological work in Rojava, and revolution in Northern Syria.