Selahattin Demirtaş : “Rather a shroud than the uniform” 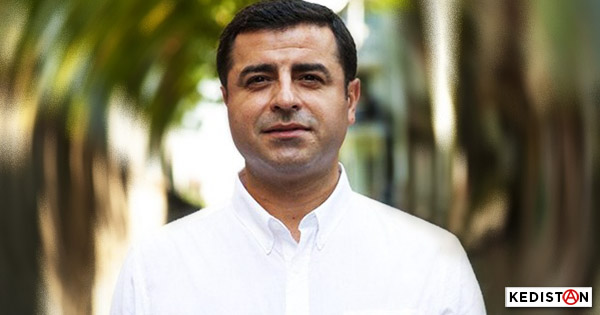 The decree edicted on December 24th imposes the generalized use of a uniform inside jails and when appearing in court for prisoners accused of terrorism. Here is a declaration by Selahattin Demirtaş against this additional ignominy, known in Turkish as the “single outfit” in jails.

Co-President of the HDP, Selahattin Demirtaş, incarcerated in a type F prison in Edirne since November  2016, made a declaration via his lawyers on December 24, in reaction to the decree with force of law imposing the uniform in prisons.

Let no one play with fire any further…

We will never accept the government’s initiatives aimed at transforming fascism into a durable regime, through the use of an endless state of emergency, and government by decree. Having already lost the independence of the judiciary along withh conditions for a fair trial, with the tyranny of the uniform, we are in a true state of lawlessness.

Imposing the uniform is a heavy violation of the presumption of innocence, of the principle of equality and of the right to a fair trial. It is also the imposition of a dishonorable practice.

Whether putchists wear or don’t wear the uniform is indifferent to us. But we will never accept this dishonor which puts tens of thousands of political prisoners on the same footing as the putchists.

Should we be given uniforms, we will tear them up and throw them in the garbage. Just imagine: rapists in suit and tie will receive reduced sentences. But the thousands of children in this country, the poor, the workers, the ones with dignity, the journalists, politicians, academics, will be forced to wear the uniform. We will safeguard the dignity of our people and absolutely refuse the despotism of the uniform.

To those who remind us of Guantanamo, we recall in turn the resistance in the prisons of Diyarbakır, Mamak, Metris, Ümraniye, Ulucanlar. Here, we are not in America, nor in Abou Ghraib. Let no one play with fire any further.

Rather than dressing in the uniform, we prefer to wear a shroud. We call on public opinion to work as one in the face of fascistic oppressions, to stand together and seize the future.

1- The intervention against the judiciairy must cease immediately, and the right to a fair trial be insured for all of the accused.

3- Except for those directly involved in the coup d’état, everyone must be reinstated in their previous employment.

4- Ongoing torture and dishonorable treatments in the prisons must cease, and their authors must be prosecuted.

5- In the name of Peace, of liberties and of the right to live together, the illegal isolation in Imrali must end.1Imrali is the island where Öcalan is held in isolation in a high security prison.

6- No to the imposition of the uniform and SEGBIS.2a videoconferencing system used to keep prisoners from appearing at their trial

In the context of these expectations and demands, we call on all political parties within Parliament or withought, organizations within civil society, corporatist ones, unions and the entire Turkish society to come together and raise a voice against fascism everywhere.

As political prisoners held hostage, we will resist with every means at our disposal against fascistic impositions. Not for our own sake, but for the dignity of society and its luminous future, we will take the risk, no matter the price, and stand upright.

When taking stock of the articles in the latest December decrees, one can only note they are a further step taken to stoke tensions and polarize Turkish society, opening the door even wider to the hunt against so-called terrorism, including branding and stigmatizing within the jails and in public opinion.

These latest tensions denote a regime confident in the face of eventual “democratic” condemnations from the outside, but gripped by haste at the domestic level, as it faces purely political dissensions, and an unfavorable, overheated financial environment. Over the years, we have become accustomed to the way the AKP leader revives fear, divisions and provocations with the approach of deadlines.

From this revival of tensions by the AKP regime, we can expect resistance that may lead to new hunger strikes in the prisons.