Zehra Doğan : Women and Art against Power and Domination 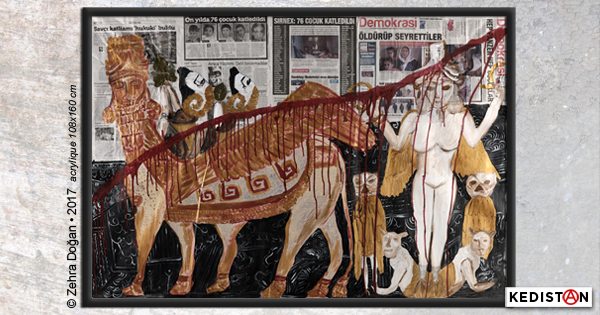 Journalist and artist Zehra Doğan, incarcerated in the Type E prison in Diyarbakır (Amed),  addressed a succinct message to Jin News on the role of Art in the fight against domination. Jin News is a news agency focused on women and staffed solely by women journalists and editors, in the tradiction of JINHA which was banned and shut down by decree on October 30 2016. Zehra was one of its co-founders.

Only Art and Women can annihilate the hegemonies

The efforts of power to bend society under its yoke are perpetuated through policies of open or hidden violence, through the use of notions such as democracy, justice, law, deflected into virus anesthetizing individuals. Not content with jailings,  destructions, occupations, lootings, wars, massacres, power continues, thanks to the age-old class system, in formatting brains and creating unsuspecting slaves marching in step according to their times.   The share of humanity obstinately facing up to this is insufficient given such violence. High intensity violence rules today, in the face of which we must resist with the greatest clarity, saying “no” in a loud and clear voice.   And one of the major ways of saying “no” is through Art.

From ancient times onward, the gods of hegemony, striking down on society through the hand of city-states of Sumerian monarchies, put Art under the yoke first, because Art was what they feared the most. Jean-Jacques Rousseau says, “Civilisation killed Art”. The Sumerian priests, while putting an end to the Neolithic period and enslaving women, did not fail to monopolize Art focussed on women. The Sumerians monopolized artistic inventions and creations from periods that had preceded them by thousands of years – inventions and creations belonging to a period of freedom from genres, painting, sculptures, memorials, architecture and urbanism, columns, domes, landscapes, the wheel, medecine, ornaments, embroidery,   epics, tales. They appropriated them. Yet they produced nothing new, simply perfected and domesticated existing creations and inventions.

Art and power cannot live together

We can easily discover that the inventions considered as primary by historians belong in fact to the neolithic age or earlier. Which naturally leads us to agree with Rousseau. The Sumerians hardly invented anything, they were content with improving. This means that power and Art can never live together! This same point of view was defended by Abdullah Öcalan : “When we look at history, we realize that the occurrence and generalization of inventions and discoveries between the years 6000-4000 BC, a time when the State did not exist, did not last once the Sumerian city-states were put in place, and in the periods following. Productions in that 5 000 long period (from 6000 BC onward), are extremely rare, almost nonexistent. Although inventiveness went through an awakening between 1600-1900 AD, it has not been sufficiently remarkable and lasting.”

* Note : Following this quote, she refers to a title from Öcalan’s prison writings, more specifically from “Libérer la vie – La révolution des femmes” (Freeing life – the women’s revolution). In order to complete the necessarily lapidary nature of the quote, refer to page 16 of the work “The Neolithic Age” Use the opportunity to set aside this link, for this work is essential to understand Öcalan’s political and intellectual journey).

In the current power systems, the same mindset continues under different masks, pursuing its efforts in maintaining Art under its yoke.

A revolutionary attitude is necessary

The State attempts to make the artist dependent through funding or public service openings. In this way it weakens or eliminates everything that might appear as a threat to its integrity. Because it knows that the most important power capable of annihilating its own domination can only come through the struggle of Art! This is why the fact of practicing Art under constraint, produced in a vicious circle, can only produce artificial, repetitive results. The artist acting as Power’s minion, no longer thinking freely, cannot create. Therefore, a revolutionary attitude is necessary.

The fact there are so few women artists is not an accident. Their visibility is censored. Women born from the woman-centered period that gave birth to Art have no longer found creative spaces for thousands of years. This is no accident either, given this nasty world led by sneaking policies of hegemony.

Finally, if the peoples of the Middle-East in particular have now reached the point of no longer being able to produce Art and are condemned by the normative notion that Art belongs to Europe or the United States, this is not an accident either.

This arises from the fact that the hegemonies, the strongest ideological templates, self-designate as the center of Art. And yet, Art grew up on Middle-Eastern soil. And the creations of an entire planet cannot be restricted to a single spot. The Middle-East is the most important land in the History of Art. The Epic of Gilgamesh (full text available HERE), poetry, cuneiform writing, laws, medical recipes, epic songs, sculptures, paintings, and numerous creations and inventions were born and evolved in these lands.

Through our roots, let’s take our destiny in hand

These lands that hegemonies attempt to empty of their contents through the virus of war, looting and the disease of integrism, are described as backward. In doing so, the powerful use a fig leaf behind which to hide their looting. Thousands of years ago, the theft began by that of the mythologies, the sciences and art. This is well-known. More recently, researchers leading digs carried away their findings to their respective countries. Middle Eastern works are displayed in their museums, in the Louvre, the British Museum… And we admire our own history there for a few minutes, after waiting in long lines and paying out our money. When ISIS attacked the museum in Irak, we all experienced sadness. Then, learning that the originals were in Europe, we were flabbergasted. And when the ancient town of Palmyra was destroyed, most of us said “If only the works had been protected in Europe…” but we did not ask ourselves what had generated the birth of ISIS and similar organizations…

The artists of Kurdistan and of the Middle East must never stop producing. And we must do so through nourishment from the lands that gave us life through their main arteries. Art is work for harsh times. For Art, the life of a dervish is required. “Hegemones” with an insatiable appetite for blood and exploitation can only be annihilated by Art and women.

©Zehra Doğan. Acrylic on canvas 108 x 160 cm. The painting represents the god Nergal, and the goddess Ishtar. The newspaper headlines mention the children killed in the Kurdish towns in Turkey. This painting is part of the exhibition of “Escaped Works” touring in Europe. It appears in the book “Les yeux grands ouverts“ (Eyes Wide Open) on pages 84-85.