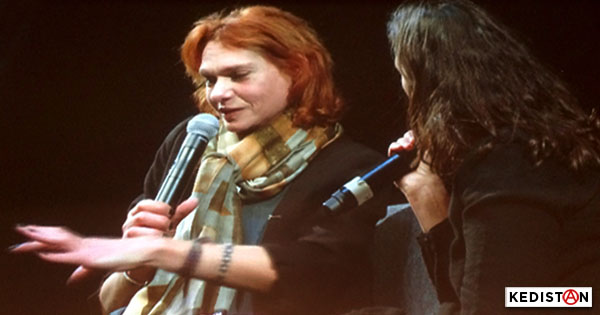 Paris, Osnabrück, Göteborg, Ancona, Köln, Oslo, Athens, Marseille, Rome, and soon, Vienna… Since Turkish authorities decided to hand back her passport, last September 4th, Aslı Erdoğan hasn’t stopped travelling. As if taking her revenge on the long months spent in Istanbul with a ban on leaving the country, hence, the impossibility of receiving personally the many prizes awarded her for her writing. It became an argument in her defense last June, during the fourth hearing of her trial: if she could not go to Osnabrück, in Germany, where should the Erich-Maria-Remarque Peace Prize be given to her, when her absence at the ceremony would speak volumes. Did the Turkish authorities take her at her word?

Hard to know what motivated their decision, since justice decisions are now totally unpredictable and arbitrary in that country. Be that as it may, Asli was finally allowed to leave Turkey. And ever since, she insists on going absolutely everywhere prizes are awarded to her. While handling a string of invitations, including that at Marseille’s Rencontres d’Averroès last November 19.

The initiative was that of Valérie Manteau, a French editor and writer who has become a friend of the Turkish novelist over time. Back from Istanbul last summer, she was looking for some way to pressure Turkish authorities, in anticipation of the fifth hearing where Asli was to appear on October 31. At the end of June, the judge had lifted her ban on leaving the country but, at the same, the passport itself remained confiscated. Therefore, the idea was for Asli to appear at the hearing with a maximum of invitations from cultural institutions, that she would have been forced to decline, thus adding weight to her request for her passport.  Valérie knowing both the founder of Rencontres d’Averroès, Thierry Fabre, and the tandem of the event’s co-directors, Fabienne Pavia and Nadia Champesme, submitted the idea of inviting Asli to the next edition of the Rencontres. 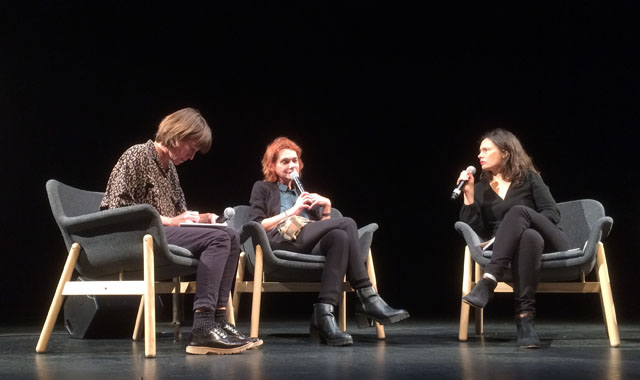 One thing leading to another, the decision was taken during the summer to program an appearance by the novelist in an Averroès workshop for juniors on freedom of expression, while organizing alternate scheduling in case of her absence. The Rencontres having also invited the Turkish writer and political thinker Cengiz Aktar, a friend of the Armenian journalist Hrant Dink and author of L’appel au pardon, there was talk of associating him to this workshop along with Valérie and to plan for a visio-conference conversation with Asli. Except – bombshell on September 4th: the novelist is suddenly free to go wherever she wants!

Naturally, Asli was pleased to accept the Marseille invitation. So in order to greet her, the Rencontres d’Averroès decided to forgo their usual customs. In principle, outside the workshops for juniors, they only consist in round tables of a slant more political than literary. But especially for Asli,  a conference-conversation was added, allowing her to express herself alone in the presence of a journalist and an interpreter, and to talk mostly about literature. The conference lasted close to two hours in a hall that could seat 700 and was close to full. A success. And lots of human warmth for Asli, who graciously obliged with signatures afterwards. But isn’t she exhausted from being so heavily sollicited?

She is. She admitted as much without saying so in the courtyard of the hotel where we met her shortly before her presentation. She spoke both of her tiredness and of the difficulties in dealing with a heavy agenda. Especially since the five months of imprisonment and the uncertainty surrounding the conclusion of her trial have left a deep mark on her. She suffers from post-traumatic stress. And explains, all smiles but visibly affected, that one of her friends has not forgiven her a forgotten appointment: « sometimes, I’m on the phone with someone, I hang up and I no longer know what I was saying”, she admits, as if she needed to justify herself. In fact, memory lapses and insomnia are now part of her daily reality. But here in Europe, there isn’t a close friends like in Istanbul who can help her cope with her ministerial agenda. And her new ultra-secure mobile phone that allows her to finally read and send emails, won’t change a thing to it. So, will this soon be the end of the European tour for Asli? 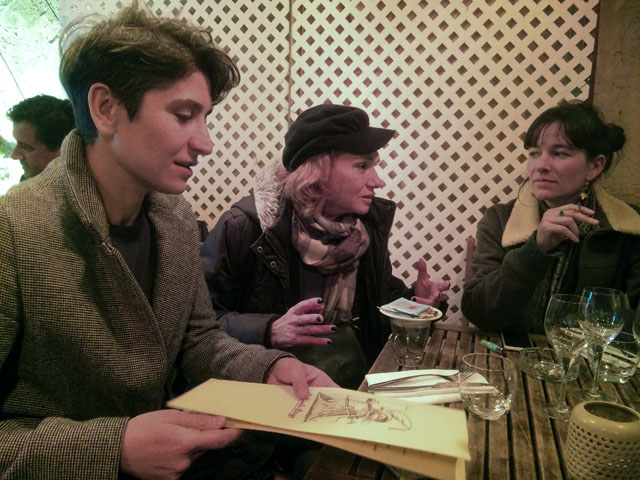 «I suppose she will feel the obligation to stop at some point,” says Valérie. For now, after spending so much time avoiding celebrity, she copes with it. She undoubtedly feels an obligation to honor the invitations extended to her. As a duty toward all those who expressed their support for her. As a duty also to those still imprisoned in her country. In a few days, she will be in Rome. Then, in Vienna. Much later, beginning of January, she will return to Paris. Etc. « She is booked until February”, explains Adar Bozbay, a friend from Istanbul presently finishing a documentary on the novelist. As her close friends acknowledge: rushing from one invitation to another also means Asli can avoid thinking too much about her situation, it is a way of being cared for. Except Asli often says as much. In order to getting back into writing – which she is starting to seriously miss – she will have to settle down. Where? She doesn’t know yet. Only certainties: she will not go back to Istanbul before the end of her trial, and for the time being, she is graciously awaited in Frankfurt…