Circumstancial alliances against the Kurds 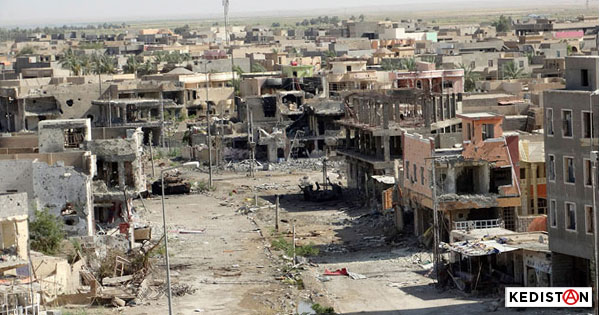 After the dead-end referendum in Iraki Kurdistan, starting another column on geopolical news from Irak and Syria as “an attentive observer” would amount to nothing but a compilation of news published elsewhere, if those “news” did not add weight to the Kurdish question considered as a possible way out. A democratic way out, as opposed to the nationalistic and imperialistic interests of a region compromised by war.

The headlines will talk about Raqqa for a moment, raise the question of the “end” of ISIS, the TV studios will probably talk of a “strike” against “terrorism” , until the next crazy pulls out a knife. Don’t expect examination of what is truly at play in the coming weeks in the Middle East. For years now, this issue has been examined by the vast majority of European commentators solely from the instrumentalized angle of “Islamic terrorism” and the war refugee phobia that comes with it.

Raqqa, ex ISIS fiefdom, is liberated from barbarity. The Syrian Democratic Forces now control the town and, in principle, a provisional administration should be handed over to the surviving inhabitants from the zone. Given the huge divisions created in the populations by the ISIS trauma, and the destructions caused in the recapture, the task will be a long one.

With minimal involvement on the ground – restricted to special forces or advisors guiding the air strikes – with its logistical aid and weapons, said “coalition” can express satisfaction, and will probably claim the military victory against the Islamic State, after letting Irak celebrate in Bagdad over that of Mosul.

We know the recapture of Mossul resulted in a carnage that was difficult to hide. In the case of Raqqa, combatants suffered heavy losses in their ranks since the launch of the offensive, already a year ago, and many count fallen friends among those losses.

While ISIS still hods scattered territories and seeks “its refuge in the desert”, one could hope nonetheless for a bright spell – if one can speak in those terms in wartime. The democratic forces, and the Kurds in their midst, could hope to “finally” celebrate this victory.

But these liberations, of Mossul and Raqqa, only signal the onset of circumstantial alliances among those who want their future share of the Middle-Eastern pie. The potential table arrangement upcoming in Geneva (or elsewhere) will include armchairs, chairs, fold-out seats – and some will be left standing.

And while counting the chickens prior to the full defeat of ISIS is pure illusion at this point – its very existence being directly linked to the deepening crises of the nation-states – the military “skirmishes”, “gesticulations” or preparations for real offensives already foreshadow these alliances.

With Russia’s tacit agreement, an axis of alliance has developed between Iran – manipulating the government in Bagdad and arming the Shiite militias present in Irak (Hashd al-Chaabi) – and Turkey, recently reconciled with Teheran over the Kurdish independence referendum.

Bachar’s Syrian regime can only be in ambush. Thus is the geo-political profile taking shape using as its excuse the independence referendum, even though it gives no evidence of leading to concrete results. On the day following the results, Barzani, its initiator, explained the process would be a long one rquiring negotiation.

The Turkish government then announced that preparations for an intervention toward Afrîn were well advanced, (Afrîn being one of the Syrian cantons of the Northern Syrian Federation, and thus opposed to the Syrian Democratic Forces (SDF) and the YPG/YP – Peoples’ Protection UnitsJ. This Turkish offensive only awaiting favorable circumstances for the green signal. At the same time, while Russian kept silent, this same Turkish government reinforced its positions in the “de-escalation zones”, following the already ancient offensive via Jerablus. Attacks on villages and bombings are now frequent.

Since the end of August, it is not unusual for the Turkish army to launch intimidation bombings, and others with more murderous consequences, against the center of Efrîn.

Taking into account the manner in which the Russian government has consolidated the Bachar regime and given its army full room for maneuvers via Alep and communications toward the North while awaiting the “settling” of the fixation point in Idlib, everything points to more than pressures being exerted against the Northern Syria Federation (including Rojava). 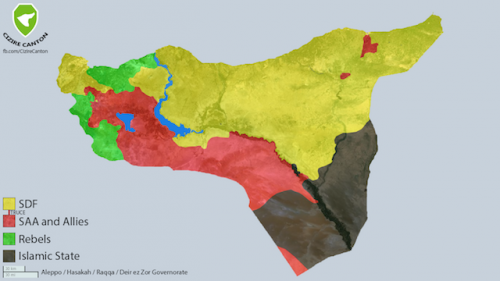 However, the recent deployment of the Turkish army in this so-called “rebel” province of Idlib in north-western Syria where the Turks were greeted as saviors, was not to the taste of Bachar, who “demanded an immediate retreat of those forces”. Bachar, for instance, recently sent his planes to bomb a market in Idlib, causing 11 civilian deaths. Yet we know that the targets of the Turkish deployments are not the Syrian regime’s forces and that the aim is establishing a rear base and alliances against the Democratic Forces.

Opening up a military front allows the Turkish government to gain a seat at the future table. Also, by provoking a necessary reaction of self-defense in the populations of those zones, it forces the FDS forces to stay in the area, from which they would have cleared out after Raqqa .

From Erdoğan’s point of view, this geopolitical gambit and military strategy game allow for a permanent weakening of the Kurdish cause and the destruction of the nascent confederalism in Northern Syria – a dreamed-of opportunity he has wanted for years, especially since it plays out with the total agreement of the larger scenario in Irak. 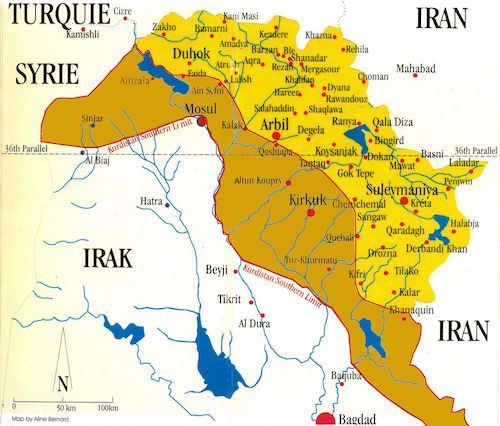 Indeed, the town of Kirkuk and the region of Sinjar were abandoned to the Hashd al-Chaabi militias almost without a single shot fire by the Peshmergas loyal to Barzani, following an offensive announced by the central Iraki government. Everything points to Barzani seeking an agreement with the Bagdad government for a return to the 2003 borders. One of the largest towns in Irak, with its oil-rich surroundings , would return to the Iraki fold, in exchange for an agreement the full details of which are not known – leaving defenseless populations that are, on the main, opposed to Barzani.

Given their bitter and atrocious recent experiences with ISIS, the Yazidis, along with other refugees, including those of the Makhmur camp, are attempting to resist with the People’s Protection Forces (HPG) and the forces of Sinjar’s Resistance Units (YBŞ).

This resistance against the Shiite militias armed by Iran and the supplementary forces of the Iraki regime will prove difficult, given that a large proportion of the populations are fleeing toward autonomous Kurdistan, now retrenched in its former territories.

Thus, the non nationalistic Kurdish forces and their allies are left facing a regime that, less than a month ago, sought alliances “against the referendum” in every corner.

These alliances are now in place to begin “liquidating” the Kurdish democratic opposition, and of course the movement around the PKK, should they enter into resistance, in place of the Barzani regime slipping away from the fight.

In this huge three-way billiard game, identifying the hits, their authors and instigators becomes difficult , whereas they were predictable when Barzani announced the referendum.

Every settling of scores becomes possible, under the supervision of regional powers. The conflict could become an open one. Let us hope it is nothing but a game of pressures, threats, local conflicts – arms diplomacy. The huge majority of the parties agree that battle for the missing chairs around the negotiation table, will undoubtedly take place on the back of Kurdish confederalism and of its political proposals coming after the nation-state crisis in the Middle-East.

In this game, the great American Satan keeps an eye on the price of the barrel of crude oil.