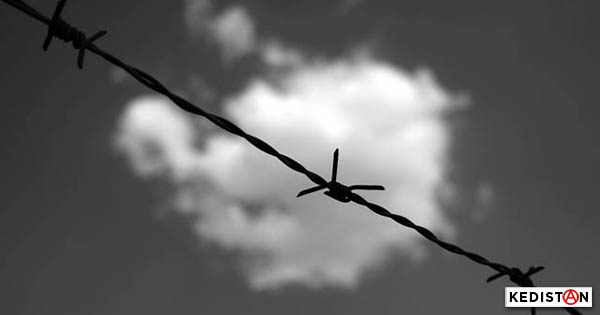 Kazım Kızıl, aka “Ka”, jour­nal­ist at Kam­era Sokak, pho­tog­ra­ph­er and video activist, was tak­en into cus­tody on April 17 while he was cov­er­ing a protest demon­stra­tion in Izmir, then jailed for three months. At the first hear­ing on July 10, Kazım Kızıl and the 6 stu­dents arrest­ed along with him were freed on parole. His tri­al con­tin­ues nonethe­less. He is accused of insult­ing the President.

Kazım Kızıl is just one among thou­sands of pros­e­cut­ed jour­nal­ists. As of today some 170 are being held hostage in Turk­ish pris­ons. Zehra Doğan, Deniz Yücel, Ahmet Şık, Ahmet Altan, are only some of the oth­ers… Loup Bureau is also among them.

Can they tru­ly be silenced? They use every means avail­able to shout out the truth. As did Ahmet Şık, who has been denied the right to receive or to send a sin­gle let­ter in over 200 days of impris­on­ment, they record their truth through their tes­ti­mo­ny. Or again, as artist and jour­nal­ist Zehra Doğan, deprived of her mate­r­i­al, who uses the fruit from the can­teen as paint, and her fin­gers as paint­brush­es. No paper? There are news­pa­pers… And a ball­point and a notepad can be all that’s need­ed to con­duct an inter­view from jail.

Once they leave jail, do they sub­mit for that reason?

No, of course not.

Here is a mes­sage Kazım Kızıl pub­lished on his Face­book account on Sep­tem­ber 6th.

I felt like shar­ing a bit…
You know, I went through a hard peri­od. In fact, it’s not real­ly over yet. The tri­al con­tin­ues in fact, plus…well, oth­er mat­ters for concern…No need to go into details over those « oth­ers » because they are more than enough for one man…

Dur­ing that three month peri­od, I missed two things tremen­dous­ly, apart from my fam­i­ly and my friends : my cam­era and nature… When I came out, I almost threw myself on nature. Then I did some min­i­mal­ist thin­gies in black and white… I was sub­ject­ed to so much iron and con­crete dur­ing a time that may seem short to you but felt ter­ri­bly long to me, drops on a leaf, see­ing water run­ning out of a hose again, the per­fect geom­e­try of a spi­der web, the fact my feet were touch­ing dried leaves on the ground, the rus­tle from the trees, those small things (which are enor­mous, in fact) moved me more and more. (My dar­ling Demet’s gar­den…) Tiny lit­tle details. Small things that, when abstract­ed, become even more magnificent…This is why it’s done in a min­i­mal­ist style…

As for black and white, this is some­thing I’ve been doing for a long time. First of all, every­thing that I wit­nessed dur­ing the June 5th attack, then the places, the peo­ple thrown into mis­ery, begin­ning with Cizre… Above that, the dif­fi­cult three month peri­od. I start­ed see­ing every­thing in black and white. So intense­ly that while I used to take pho­tos in col­or and mod­i­fy them after­wards, now I take them in black and white directly.

Dur­ing this peri­od, I found myself fac­ing many ques­tions such as « will you write inside, are you think­ing of writ­ing a book? »

Let’s skip over the busi­ness of a book (because it strikes me as ridicu­lous) but yes, there are many mem­o­ries, sto­ries and prob­lems I could write about con­cern­ing life in jail. But I haven’t even writ­ten about it on Face­book and I don’t think that I will write up these things. I don’t want to tell a sto­ry based on the fact I was in jail. I just want to make videos that will be use­ful (yes, they have to be use­ful!) that will be good from the sound to the music, from the cam­era to the edit­ing, from the col­or to the theme. Good doc­u­men­taries. I don’t want to be « the guy who went to jail », but « the guy who makes videos ».

I’ve been out for close to two months. I had to rest. I rest­ed a bit. I need­ed to stock up on ener­gy, I gath­ered up some. I had to heal myself, I’ve healed myself a bit. Even if it’s only a bit, even if dif­fi­cul­ties show up with the rest of the pro­ceed­ings, I feel incred­i­bly « strong ».
And now?
Now, it’s time to keep on going on from where I was. Start­ing on Sat­ur­day, I will be in the vicin­i­ty of Gaziantep, Kilis, Hatay,to start pre­lim­i­nary work on a new documentary.
The short ver­sion of what I want to say : me and my cam­era are com­ing back into the field.
(PS :Don’t think the min­i­mal pho­tos are fin­ished. You’ll be sub­ject­ed to a bit more. Deal with it!)

Kazım pub­lished the fol­low­ing video on July 31 with this comment: