Denunciation as a method for conflict resolution… 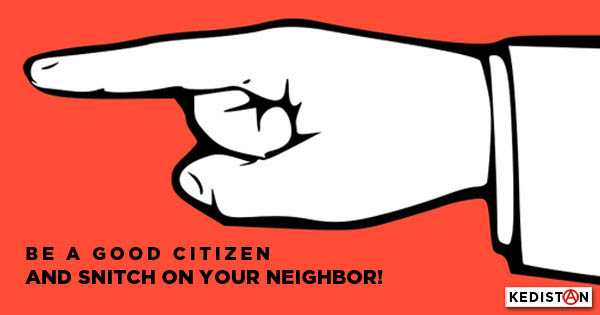 Three leaders of the union for the private security sector, “Güvenlik-Sen”, tied to DISK (the Confederation of Progressive Trade Unions of Turkey) denounced three union members to the Republic’s Prosecutor for « insulting the President » when they expressed opposition against their leadership.

The President of the Güvenlik-Sen union, Serdar Aslan, along with the President of the bureau of financial affairs, Doğan Özdemir and General Secretary Hüseyin Ünlü, used the expression « insulting the President » as their lifebelt in order to silence union members opposed to the regime and denounced these workers to the State.

The complaint, filed with the Prosecutor in Izmir, specifically designates four workers : Salih Şenol, Kadir Bülbül, Garip Karatay, Volkan Karataş, along with a website, bizimsendikamiz.org, its administrators and unidentified persons in charge.

The official documents of the complaint are published on the Umut-Sen website, a collective of unionized workers.

From these documents we learn that upon denunciation by Güvenlik-Sen’s administrators, the police infiltrated one of its members into a Facebook group called “I.B.B. Security Workers », configured as a a confidential « secret » group, closed to the public and thus visible only by the group’s 722 registered members, among them the « suspect », Salih Şenol. The document specifies that, after examination, the publications attributed to Salih Şenol were not found. Umut-Sen describes and denounces the administration’s attitude as « a new link in the history of collaborationist unions ».

There is nothing surprising in this. The social media are under close surveillance. In the second semester of 2016 only, 68 774 social media accounts were denounced. In January 2017, we published an article titled “Réseaux sociaux, l’oiseau en cage, le F accusateur…” (Social media, the caged bird, the accusing F…) in which we provided chilling numbers : approximately 3500 people have been detained, and 1500 of them thrown in jail. Inquiries have been launched against 17 862 internet users. Once the inquiries terminated, the « internauts » await arrest. Among the files still open, out of 68 774 persons, 21 723 are clearly identified, 47 024 still under verification.

If anyone can be targeted for some 140 caracters, the denounced union members Güvenlik-Sen aren’t targeted for nothing. For they aren’t just anybody… They had recently uncovered the embezzlement by the current union leaders of the dues paid by union members, and provided proof of this at the union’s Second regular Congress in April 2017. They had submitted a candidate to represent all the union councils opposed to the current leaders and demanding proper accounting.

One of the “suspects” Garip Karatay says :

DISK General President, Kani Beko, and other high-ranking officials at the national level, as well as the official for the Aegean Region, have covered over the corruption of these three individuals who denounced us to the Prosecutor. During the entire Congress, which lasted forty days, they participated in all the meetings and worked so that the clique of denunciators would come be cleared in all the discussions. And in instances where their « name and respectability » were not sufficient, they enrolled mayors and leaders into their circuit, in order to convince the largest possible number of workers to agree with them.

Those at the head of DISK did everything in their power, notably by blocking access to the meeting halls of opposing delegates, by slowly culling out all the democratic aspects in the union’s Statutes, and working so that the clique of thieves and denunciators come out winners.

If one of the workers is arrested following this denunciation, this shameful scandal will take on other proportions, including for those who paved the way for this ignominy. DISK must urgently take the lead in revealing its position concerning its media support to these three administrors, and proceed to its self-criticism.

At this time when the great march for justice would like to appear as the « gathering » of the democratic opposition, these practices reveal how, behind the facade, there exists a will to political hegemony on the part of fractions, visibly linked to the CHP, who do not hesitate to hand over their opponents to the AKP’s regime of injustice.

In the same way as demonstrated by the vote to lift parliamentary immunity last year we now see in the workers’ unions the ravages of parliamentary opposition under the flag of « national unity », and how fundamental oppositions to the regime get settled for those who speak outside the approved « talking points ».