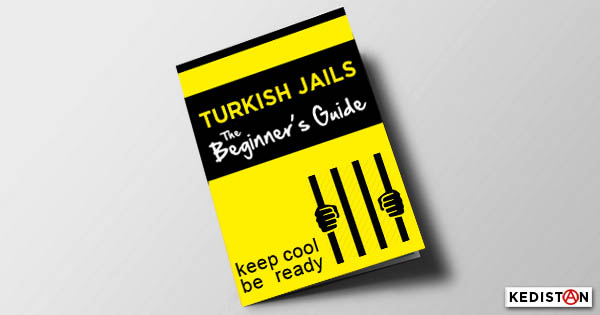 In a recent article in french, we published comments by Selahattin Demirtaş, praising the virtues of « popular humor » in order to be heard and understood without hatred or spite, despite all the seriousness of the repression.

Here then is a text written in prison by Selahattin Demirtaş that illustrates his method (originally published in Turkish on Birgün and translated by Kedistan.)

My incarceration is too recent to allow me to forget the sound of life still flowing freely outside. It isn’t long enough either for me to give lessons in a country where some hostages have been jailed for over 25 years. But I consider it a duty to write down my impressions on the world of incarceration.

One of the objectives in jailing us is to spread fear in society, to intimidate everyone with the threat of prison. Our duty then consists in annuling those efforts. In any event ‘fear doesn’t help death’ [Turkish proverb]. If we must break down the climate of fear in order to enter the season of courage, instead of cowering in front of the injustices and illegalities, it’s wiser to tease fear.

I’m writing so that you will have fresh information on hand should you be arrested. In all honesty, there are no novelties worth talking about… Therefore, I will write about small matters of daily life. You can store in your memory what you find useful…

When you enter, they search you and confiscate everything it’s forbidden to keep. But they cannot confiscate your “opinions”, those that are put forth as the motives for your incarceration. Thus, you can bring them inside with you. A strange practice.

During the first days, when they take you out of your cell, you may panic for a moment in the corridor, searching for your key and thinking you may have left it inside. No panic ! Here, there are a lot of locks, but no key.

Your visitors always find you at home, no problem. There’s no one to tell them : “Monsieur just left for a meeting”, or “He’s on annual holiday, if you wish to leave a message, we’ll pass it on.” In other words, you have no excuses…

Don’t be saddened if, on the outside, you are a person who is loved and respected and who counts for the members of his circle. Here, they count you at least twice a day. It’s better than nothing. Try to draw some happiness from it.

Here, you don’t have the worry that makes you say : “Damn ! I’ve no battery left !” Your battery is never down here. Take it easy, don’t stress yourself.

They can’t block your Internet connection either, as they usually do when events intensify. It gives a sensation of serenity, a foretaste of freedom.

For those complaining because they never appear on TV, matters have been taken in hand. There are cameras filming you 24 hours a day and buddies following your every move on their screens.

My friends, if you spend your days in a sweat, rushing not to miss the bus, the metro, the ferry, this place is made for you. Because the transfer vehicle, called ‘ring’ absolutely never leaves before you are aboard. Great importance is put on the travellers’ satisfaction.

You’ve reached the point where you can’t go anywhere without the help of your GPS navigational system ? Not to worry, at least 4 guards take you everywhere you must go.

You’ll certainly have friendly co-detainees who’ll want to tease you by saying “hey I just heard the doorbell, you want to answer ?”. Don’t let them fool you.

If you hear noises in the night, you can be sure it won’t be robbers. Of course, there are robbers in jail but they are in other wards and other cells. In any event, they are only small fry. The big robbers aren’t sent to jail. You have nothing to fear.

Here, no one threatens to send you to jail. It’s a rather pleasant sensation.

For those who get excited and say “I sent a message ten minutes ago, and no one’s answered me yet !” Here, at least a month goes by between the sending of a letter and receiving an answer. An excellent method to learn anger management.

No point in adding to the canteen list items such as pickaxes, saws, sickles, hammers. Those nasty boys don’t provide them.

Here, there are teachers, directors, assistant directors, but don’t count on the day when you’ll receive your year-end report card and go on holiday. No report card. Guaranteed.

Even if you show off by saying “I’m the son in law of a family in Lice” [allusion to a very influential Kurdish family in Lice], you won’t get anywhere. It’s not your father-in-law’s fault. It’s the way the system works.

In Izmir they call sunflower seeds “çiğdem”. Here as on the outside, that doesn’t change. [Residents of Izmir have their own designations for certain things. For instance gevrek instead of the sesame seed pastry everybody else calls simit.]

Here also “life is short, birds fly”, here too “even if you’re a dragon it makes no difference”, here also “true love is not giving up”…