Spot the error : Erdoğan, an oligarch elected by the people 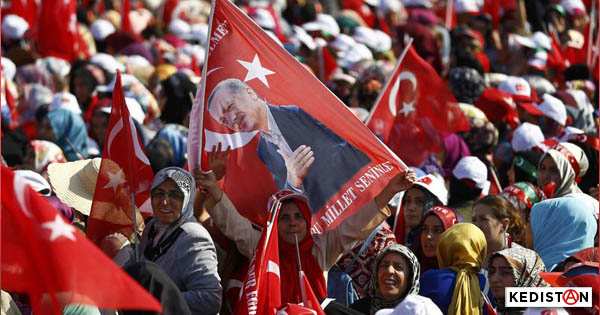 People, oligarchy, nation: big words that filled the french presidential election campaign, and functioned like an infernal trio, both on the right and on the left.

The People against oligarchy, apparently this would now be the alpha and omega of every political analysis during an election campaign, as a definition of the way to save the “nation”. The people’s sovereignty would thus express itself in its capacity to overturn the reigning oligarchy, while the “nation” would free itself from supra-national oligarchies, in this case European ones, often denounced under the terms of “finance”and “liberalism”.

Thus constituted, an entire corpus has contributed to an electoral “popular education” brimming with shameless populism, aimed at choosing the power-that-be. Calls to insubmission on the one hand and to identity on the other were sung in praise of a sovereign Nation-State giving back “power to the people”.

Since an analytical tool is useful if it finds universal application, let’s try this on Turkey, for instance.

In many languages, the words “nation” and “people” are used indifferently to designate the same thing, with context supplying the proper meaning. (For instance, it is common to speak of the “French nation” as a way to designate its population.) In Turkish, this is the rule. A not insignificant one, with deep links to its history.

The Turkish Republic founded by Mustafa Kemal, rests on this concept of an indivisible, inseparable people-nation, picking up in this the Occidental creed of nation-states, exported throughout the world, often with the colonial bayonet or the imperialistic ruler applied to military maps. This was the case during the carving out of the Ottoman Empire into “States”. The new imperialistic powers then fitted “peoples” into geographical cubbyholes and geopolitical constructions by divvying them up and assigning them to territories. Population mosaics were crammed in, by force or through war, to fit the generic name thus assigned. This is how the Middle East was “nationalized”.

The future “official Turkey” was coveted by many, as was Mesopotamia. To simplify, the final collapse of the Ottoman Empire following the Armenian genocide – a most important component of the mosaic – led to a war of independence and a national revolution led by Mustafa Kemal, who became Atatürk, father to the Nation and the Republic.

Some “orthodox marxist-leninists” will see in this the first stage of a revolution, the “national” one, to be overtaken by the supposedly inevitable “proletarian” revolution, given the class antagonism created by the newly established bourgeois republic serving the interests of the capitalistic class. We are familiar with the orthodoxy of the “inescapable transition”. Nor do we deny that the Kurdish movement developed this same longing for national independence, since the “Kurdish Nation” had not received territory, neither in the great haggle nor through Atatürk’s republican solution. A great part of this struggle for Kurdish independence was logically taken on by the partisans of armed class struggle, Marxist and Leninist, that grew out of this same belief in the necessity of a “national” stepping-stone toward “communism”. In the final years of the twentieth century, up until 1990, the PKK was the representative and actor of this ideology. And everyone is careful not to mention too loudly how it works ceaselessly at escaping this dogma, in order to let it live on as the leftist opponent…

To simplify, I’m summarizing in this way the people/nation bundling and a few of its consequences, on the Turkish scale. In Turkey, there evolved a republic more Turkish than the Turks, a nation one and indivisible, both in territorial and ideological terms, in total dissonance with its mosaic of peoples with their cultural and religious imprints. Analysts have used the concept of “Turkishness” in order to define its aspects and reality. At a sharp angle from this republic, the “peoples” in the territorial mosaic became de facto “minorities” again, some as victims of the genocide’s aftermath, others as victims of pogroms and expulsions, while the Kurds were colonized from the interior, suffering through repeated massacres and deportations. Let us not forget the religious differences, sweeping through the history of the settlements. This Turkish nation-state, often erroneously held up as a “model of a secular republic” on “Muslim lands” is not yet a full century old. In this period of less than a hundred years, it has not long known internal peace.

The history of the Turkish Republic melds with the oligarchic power established with an iron fist by Mustafa Kemal, then diversified and consolidated by military political power born of coups d’état aimed at re-establishing “republican order”, heavily disrupted in the seventies by class struggles and armed confrontations between the Turkish ultra-left and the ultra-nationalists. Turkey’s economic evolution and its capitalistic integration provided substantial support to this oligarchic power which it fed. We see nothing unusual in this, when put in parallel with the equally chaotic political evolution in European states caught in the torment of decolonization, or even the European conflicts in the Balkans that followed upon the “fall of the Wall”.

Also noteworthy is the fact the driving force of these antagonisms and political crises accompany capitalistic development and integration, and the significant role of financial oligarchies in Europe in the choice of policies to implement or preserve. They rest on class antagonism over the deepening gaps reducing populations to misery and precariousness, while upsetting the social and territorial geography. In Turkey, the rural exodus led to the development of enormous metropolises where all compete in the sale of their labor value, while uprooted and assigned to their “Turkishness”.

You will note I’m adopting this term used by the oligarchy. Nonetheless I avoid using it for any purpose other than the designation of a mode of alliances between different interests and power.

But in the Turkish chronology, how does one then explain Erdoğan’s rise all the way to the absolute power he now wields ?

At first glance, if we apply the interpretation grid as that of the people vs the struggle against oligarchy, he has everything right.

He has led a “citizen’s revolution” over more than a decade, modified the constitution on a number of occasions ; perhaps he has only forgotten to “hand back the keys”.

Other users of this same analytical grid -let’s say the more nationalistic extreme right- will not agree with this view, a certain religion keeping them from doing so. And since, xenophobia exerting its rule, they don’t mix much with Turkish ultra-nationalists despite their ideological closeness, they reject everything under the “none of that in Europe” – which they assail nonetheless with quixotic energy.

So, has Erdoğan succeeded in HIS citizen’s revolution through his refusal to submit to the Kemalist oligarchy ? His anti-elite populism, his maniacal onslaught against the Kemalist military caste, resting nonetheless on the very same “identitarian” discourse as that of Turkisness, coupled with the Sunni religious identity (officially espoused by the previous republican regimes) matched the “people against the oligarchy” pattern in its ascending phase. Let’s note that the progressive seizing of power on this model was done through the ballot boxes, according to the Republic’s rules, even if these were occasionally twisted out of shape.

Are the “Turkish people” in power for all that ? When listening to Erdoğan, one can only answer in the affirmative. When looking straight at the facts, no need to draw a picture, many have just answered NO.

Thus, this kind of populism has led to the worst, to the reality of a fascistoid power, owned and managed by a new “oligarchy” that subsumes a heavy component of the former, liberal finance that ignores all odors and all religions.

Each one of these paragraphs deserves to be treated in one or two articles. But our regular readers know what I am talking about…

If we add that the EU has largely contributed to the political ascension of this individual, to his fight against the military caste, against a certain form of “nationalistic” capitalist economy, and that it has funded investments in Erdoğan’s “modern Turkey”, we will have the overall perspective on the matter. And if the EU has curbed plans for Turkey’s political integration (a fact Erdogan skillfully exploits to flatter sovereignist and nationalistic sentiments), it nonetheless continues to do business with Turkey, and more than ever, when it delegates to Erdogan the key to its frontiers, as it had formerly done with Kadhafi, in order to exorcise its migratory phobias.

So, a “citizen’s revolution” with bad intentions, and “non secular” to boot ? Have the Turkish people been duped in their oligarchic insubmission ?

Wouldn’t it be simpler to acknowledge that, among a certain French “Left”, this kind of populism, as political software, further coupled with a sovereignist republican ideology, in defense of the Nation-State born of the 1789 bourgeois revolution (and not of what was a founding moment in its time, such as the Paris Commune), leads away from the realities of class struggle, and only serves to cobble together an electoral program for the duration of a presidential election, in a running against other forms of populism…

In a time when all political confusions compete with nationalistic isolationisms of all stripes, along with religious and identitarian questions of a reassuring tinge or falsely combative against capitalistic globalization, it is both inoperative and dangerous to ignore a budding form of fascism where it is taking root, to brandish nationalistic solutions to ongoing wars, to draw equivalencies between institutional forms of economic liberalism, not to mention a host of other topics I’ll ignore for the moment. It is just as harmful to reduce the complexities of social oppositions to binary forms, in order to instrumentalize the angers for electoral purposes. In effect, even the best analyses on capitalistic, human, social and environmental predation, operating everywhere and served by different forms of political power, then disappear behind simplistic populism.

Head buried in the manure on which the national cock crows, we don’t hear what others are singing, and sometimes the songs intermingle, as the Ezan does at night when it resonates over Istanbul.

*I wish to make clear that this is a column in the context of “rude political words” for which I take sole responsibility even if it published in Kedistan. I also wish to mention that (French-language) links are included in the text, in order to avoid useless contentiousness caused by apparent short-cuts I may have taken in a column of 1700 “rude political words”.