“Şûjin” the feminist newspaper with the tongue that stings 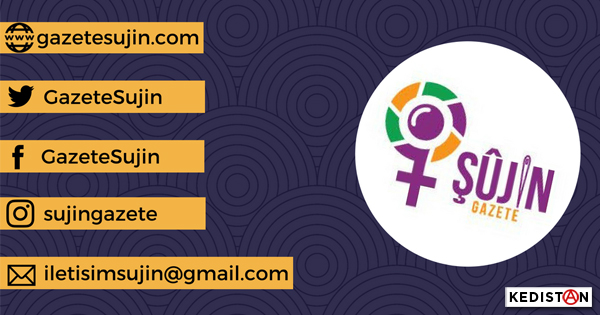 With the birth of Şûjin, no censorship, ban or decree can really stop women in their struggle to own their freedom.

A new, feminist source of information has been launched. We had Jinha, the feminist news agency of which all members were women, a world first. The Turkish regime banned Jinha, shut down its offices and sealed off its doors.

They are back, enriched by their previous concrete experiences and even more determined not to be silenced. They have organized under Şûjin’s roof.

In Kurdish, şûjin means “the big sewing needle » the one used for heavy work, for example for bags meant for packaging… So why this name, şûjin ? « To stick it into the tongue of mainstream medias ! » they answer.

The şûjin tool is a woman’s invention, and since şûjin includes the word jin, meaning « woman » in Kurdish, it was perfect to represent the newspaper.
Women who began their venture into self-defense with a needle, continue their struggle, even if the Şûjin paper has been shut down by the regime. Equiped with pencils and cameras, they will keep on pricking with the big needle where needed, wherever male domination, patriarchy, sexism, militarism, racism and specism show up.

In a world where we still hear « As women, shut up ! »
Şûjin will raise its voice, not only by relaying current news, but also by carrying the voice of women with ideas in the column « From women’s pens », women’s words that the system attempts to erase in its « Files », and women’s life stories transmitted as heritage in its “Portraits”. The column “Jineology” will be reserved for exchanges, discussions, and theoretical and ideological advances.

Şûjin is on its way… In its pages, women will be at the heart of the news, rid of their patronyms that are a continuation of patriarchy, the affiliation inscribed on their identification papers.

And Şûjin arms itself with a tongue that stings like a needle.

Şûjin has been banned and shut down, following the promulgation of decree n° 693 on August 25th. Şûjin’s offices and those of the news agency Diha, also forbidden by decree, have been placed under seal.