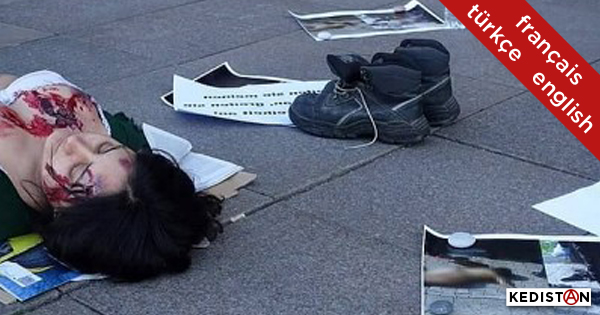 “What is naked today is not the body of a woman whom they have slaughtered but the very understanding of the government of war itself.”
Figen Yüksekdağ

A woman is killed on the street in Cizre. Her dead body is stripped naked by those who killed her. They are soldiers; she is alleged to be a combatant of the PKK. Photographs are taken; they circulate on the news and social media. It’s not the first time this has happened.

The body of a female Kurdish fighter becomes – again – a symbol for the intentions of the government: not to “end terrorism” but to force an entire region to heel by systematic bombardment and humiliation. The trouble is that in this act of dehumanization, the real power of the woman and what she represents is evident. In any patriarchal system, a woman who chooses to resist is infuriating: she triggers the kind of rage that allows her killers to strip her and then disappear her.

The above statement from HDP co-chair Figen Yüksekdağ says it perfectly. Actions such as this demonstrate an intention not simply to deal with individuals who perpetrate acts of terror against the state or civilians, but to cast the net much more widely. Any political demands made by Kurdish organizations are reduced to acts of terror against the Turkish state. “Terrorist” in this sense serves a twin purpose. Firstly, a terrorist does not deserve the ordinary processes of justice but can be killed by virtue of being labeled as such. Secondly, the concept of “terrorist” is vague enough that it has been expanded to virtually the entire Kurdish population, or anyone suspected of harboring ill feelings toward the state. A recent and vivid demonstration of this was the bombing of wounded civilians – among whom were PKK operatives, or so the state alleges – in basements in Cizre. Once a person is named a terrorist by the state, her place as a citizen, a person with rights, is erased. 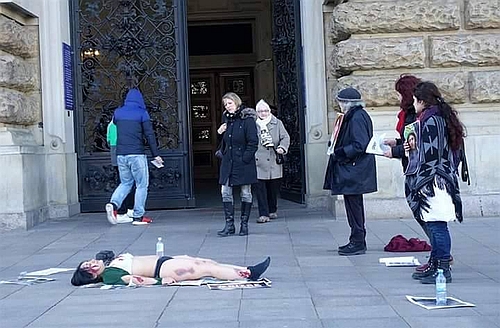 In this strange and amorphous war, the body of the dead woman becomes a cipher, a symbol. She must not only be dead, she must be dead and naked and humiliated, she must be denied any kind of dignity. She is not a soldier, nor a rebel, nor an enemy, nor a combatant – she is first and foremost female, nothing but a body. She must be reduced because the threat she embodies is multiple: she is a woman, and also a Kurd, and a fighter, a rebel. In the logic of a hierarchical patriarchal system she must first be reduced to nothing but a woman, and then reduced to even less than a woman – a dishonored woman, a naked one.

In The Body in Pain, Elaine Scarry argues that torture is a trick, an “act of compensatory drama,” conducted on the body of the prisoner or victim – it produces physical pain that is incontestably real, therefore making the regime that produces it appear real. I would argue that something similar happened in this case and others like it, where the body is denied all dignity and privacy even after death: it is a display of power by those who killed her and stripped her, and its aim is to illustrate the real power of the state and its armed forces. The woman is erased and in her place is left only the stamp of the state’s power. Yüksekdağ, in her statement on the photograph, reported that many bodies in Cizre and other southeastern cities that turn up at the morgue “do not have physical integrity.” This suggests that there is something systematic in this kind of torture or interference after death: the end is not simply to eliminate the enemy but to dehumanize her totally.

The body of the woman in the photograph has not been recovered. She has disappeared. How do you mourn a person who no longer exists? As Nicholas Glastonbury pointed out in an article for Jadaliyya, mourning is highly political territory – attacks on the funerals of the Suruç victims and on the graves and funerals of Kurdish combatants take place because these deaths are not considered valuable enough for public displays of recognition and respect. Glastonbury draws on Judith Butler’s argument that public mourning delineates what kind of life – and what kind of person – is valuable. In the current equation, the life of a female Kurdish combatant (if that is what she was) appears to register so low on the scale of value that she can be used as a canvas.

All this is documented in a kind of pornographic image that looks like a still from a snuff film, tastefully blurred on major news sites. Andrea Dworkin has argued that this kind of imagery – where visualized power corresponds to actual power – allows “the purging of [women] from a shared community of care and rights and respect.” If there was no image, the act would be limited to those who took part in it. The image, endlessly reproducible, re-asserts the imbalance of power each time. But that imbalance is not sacrosanct. As Yuksekdag argued, such acts only make women’s resistance more determined. Part of this kind of horrific behavior stems from there being a very real and vivid power in the living female soldier that even in death, cannot be properly stamped out and so must be humiliated and stripped too. Arguably the violence meted out on her means that her existence struck a deeper chord.

As Dilar Dirik pointed out in a speech at the New World Summit, Kurdish women long ago decided that what they were fighting for was not a nation – which in no way requires the sex/gender system to be undone – but an entirely new way of existing, one in which women are not handed rights by state-run women’s empowerment projects but actively embody and engage in their social and political power at every level of society. 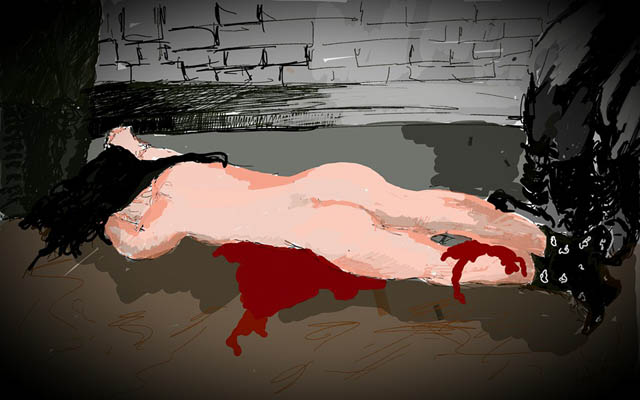