Zehra Doğan at the Tate Modern in London 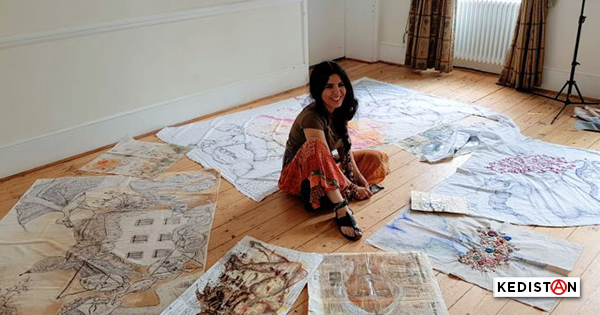 A recent press article titled: “Zehra Doğan, from Turkish prison to the Tate Modern.” The headline seemed to introduce a fairy tale, although this excellent article, published in London, was simply announcing an installation by Zehra covering the black years of 2015/2016.

What is there to know exactly about Zehra Doğan’s artistic and activist presence in May in one of the most prestigious contemporary art museums in Europe?

This is what Zehra Doğan said in recent interviews.

She also announced: “I will present an exhibition at the Tate Exchange in London from May 21st to 25th, along with other artists.”

Under the title “Who are we?” the event was conceived by Counterpoints Arts and The Open University with artists and activists.

“As a journalist who covered the destructions and confrontations in the Kurdish towns in Turkey between 2015 and 2016, I will show objects I assembled that had been abandoned under the rubble of demolished buildings. Through these objects depicting a wounded everyday life, I will tell the story of these people. This installation will highlight my work as an artist and as a journalist. One of the most striking objects on display is a burned multi-colored carpet.

This carpet represents all the country’s inhabitants: Turks, Kurds, Arabs, etc. People are beautiful when they are together, not when they are divided. However, this partly burned carpet shows we were divided and burned. There will also be clothes that are a part of people’s identity – how they value and define themselves. These items were left behind, burned and lifted out of the rubble, showing there were deaths…“

As a reminder, Zehra has just spent over two years in Turkish jails. In London to received a prize for her art, the English PEN is greeting her in residence. For those who know the power of her words, of her writing and of her works, there is nothing surprising in the fact the contemporary art museum of London, the Tate Modern, should give Zehra and other activist artists a sort of “carte blanche”. She insisted on presenting the cry and the memory of the tortured ones from the Kurdish towns under siege in 2015 and 2016.

Sentenced and incarcerated for “propaganda”, because of a digital drawing showing the destroyed town of Nusaybin, a drawing done during this nth black period for the Kurds, she repeats her denunciation with this installation that will include chronicles of these sieges, read or available for consultation.

This is how Zehra described this installation:

“My work is an installation. I call it ‘Ê Li Dû Man – Left Behind’. A burned blanket will be suspended in the entrance. It is one of the blankets that hung as barricades in Nusaybin. The people had hung curtains and blankets across the streets to protect themselves from snipers. These suspended barricades were not only curtains. They were also armour. Does someone remember the white flag held in one hand? All of us still know what it meant.

There will be a burned, hand-loomed carpet on the ground. This carpet represents the peoples settled on these lands. In order to be together, we had knotted the threads and woven something like a beautiful carpet. But it is burned, as we are. We are like the carpet, burned, broken, torn…

The videos and photos I took during the curfew will be shown on screen with the installation. And stories will be read of those who lived behind the barricades. What happened during the curfew, what happened before, how did it end? Each of the visitors will be informed of the events in 2015-2016 and will receive a written text. He/She will read, learn and understand. And when they leave, they will take with them a copy of the paper ‘Ê Li Dû Man’, prepared with journalist Ege Dündar. In this paper, they will learn about the Kurdish experiences, the jailed prisoners, the hunger strikes, the writers, poets, artists and children. After all this, perhaps each person can go home and act, by writing a letter to prisoners for example…”

By searching through Kedistan’s archives for the years 2015/2016, you will find elements of this context. But of course, best of all would be to attend the exhibition between May 21st and 25th.

As a further reminder:

End of 2019, you will find Zehra Doğan’s prison correspondence and a retrospective of her works from the years 2016 to 2019, published at Editions des Femmes in Paris.