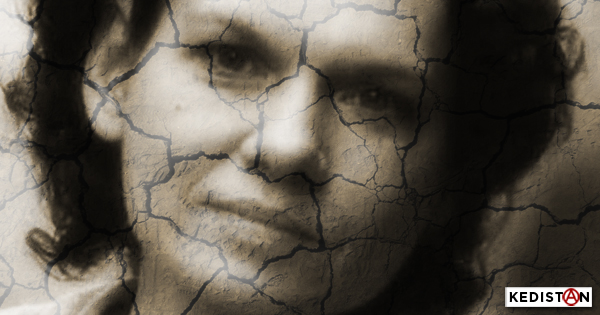 “The diary of fascism: today”

Another day with no beginning and no end…Like a comma placed at random between two long sentences, between the past and the future,   silently waiting in the spot where it was put down. Two very long sentences, boring and repetitious…That don’t say what happened, what disapeared with no possibility of return, what will be lost once, then once again…That give no indication of what will never happen…The past and the future….Two words caught in the nets you threw on the surface of the unknown called life and that you pulled out of the fog, the limits of which, the shores, and the waters are not visible. That resonate in the void, that let loose gales of infinite laughter when you hold them to your ear…Your chilled and silent”past”, your only past that you tore up with your bare hands from the lightless depths of the rocks; and yet that flows between your frozen finger before reaching the top…But just over there, on the other shore, like an army whose bayonettes gleam in the sunshine, ready to bear down on you inexorably, “the future”…And flowing just inside, as if brewed up from an irreparable crevasse, the days, today. Life like a wound the pain of which is apparent when it cools or, perhaps, the clear absence of life, which makes its existence felt alone, with pain.

The days of massacres… Cruelty, tears and blood.  The words that define colors, the shadows, the light of our daily life shortening the horizon on reality, are nothing more than “themes”, obsolete steps, epics, great tales that no one reads unless obliged to, or on the contrary, the subjects of short stories read, listened to a thousand times, followed constantly…As if we still had a lot of words to say, but had no voice anymore. As if that voice sounded in emptiness when we wish to speak, to give meaning, did not belong to us anymore, as if this silence that has replaced true cries that we could howl, did not belong to us any more…Our handshakes are limper, shorter, we quickly pull together the usual phrases, we hand them over more quickly from one to the other…Each time we meet, we repeat with all our might that “we are living through such bad days”, we repeat this and console each other.  Our cries ” we exist, we are here”, resonate longer, resonate and remain without answer. Like puppets with freshened makeup, we turn our most resistant faces toward one another, as if no one could look into our eyes…The looks are without curiosity, without questions, without answers, they slide elsewhere, far away, with the tiredness of those who know what they will see…The mirrors are more deserted than usual, soulless…Empty dead eyes, cold and empty words, cold and dead hearts…As if we were sending back to the past, our own past,  botched copies of ourselves,

As for those of our features we offer to the future, they can in no way take shape, as if one absence of shape was exchanged against another…We cross these days slowly as if walking on tiptoe in a hospital corridor…As if, in an endless grey purgatory dawn, in a space that stretches out like a thin tongue in the fog, in a space where cries and calls can no longer reach us, we were walking, we were walking.

The unbearable weight of living and writing in these days where people – some of them wounded, others still children – encircled in cellars, are burned alive…The terrible weight of silence that words must bear, words as substitutes for life…This cliff is there and here, in the past, in the future, in the present…Even if we turn away our eyes, it does not let us go with its eyes of a unique depth. It silently looks at our tales, at sentences that have lost their subject, at all the unfinished stories, it looks on with the eternal silence of all lives, it waits, in a foggy infinity, it walks between us.

Later, when we will turn back for a look at today, perhaps we will say: “In fact, we rather liked fascism”, sealing off the deep wound of the puppet with fresh paints…