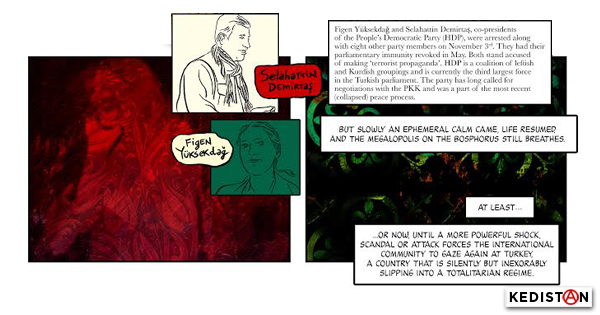 We present two magnificent strips from the Italian artist Gianluca Costantini whose motto is “everything is art, everything is political” Gianluca in colaboration with journalists has produced a few strips of “graphic journalism” including some about Turkey.

Gianluca Costantini (Ravenna, 1971) has exhibited in a number of museums and galleries abroad: the Lazarides Gallery, London (2009), the Salon du dessin contemporain, Carrousel du Louvre, Paris (2010), the Dox Centre for Contemporary Art, Prague, the Museum of Graphic Humor Diogenes Taborda, Buenos Aires (2014). In Italy, his drawings were exhibited alongside Alighiero Boetti’s works at the Museum of Contemporary Art in Lissone (2013), or made up large installations and themed projects, such as the D406 gallery in Modena and the Centro Arti Opificio Siri in Terni. As a Graphic Journalist, he gave a lecture at the Ars Electronic Center in Linz (2009) and took part in the Festival Human Rights in Lugano (2015).

With him, drawing can become a performative act, in a magical dialogue with different stories ad languages: it happened with Hanif Kureshi at the Teatro Alighieri in Ravenna (2011), and with Emidio Clementi, the singer and bass player with Massimo Volume in Modena.

Gianluca has an array of material about the Kurdish people and other groups resisting in Turkey  among other things, as well as strips in support of Allepo, Keywan Karimi and Chelsea Manning…

We note with amusement that his blog was being censured by the Turkish government last June.

Gianluca also co-operates with Alberto Tetta, a free lance journalist and scriptwritter, who has been living in istanbul for ten years, as well as Francesca Tosarelli, photojournalist, camerawoman and cross media director. 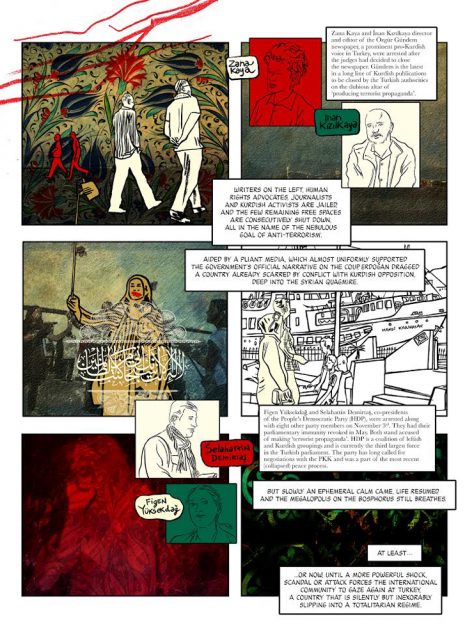 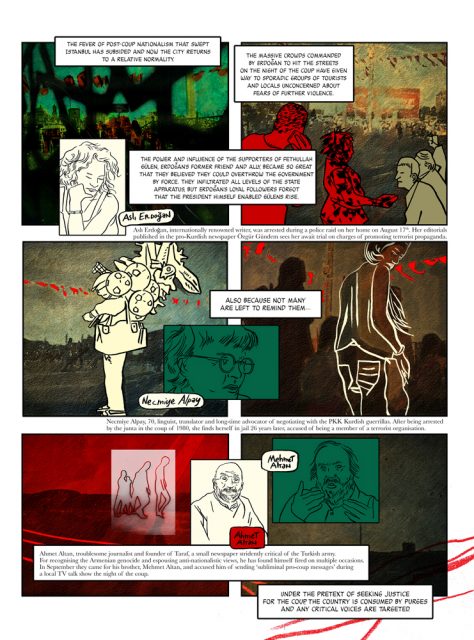