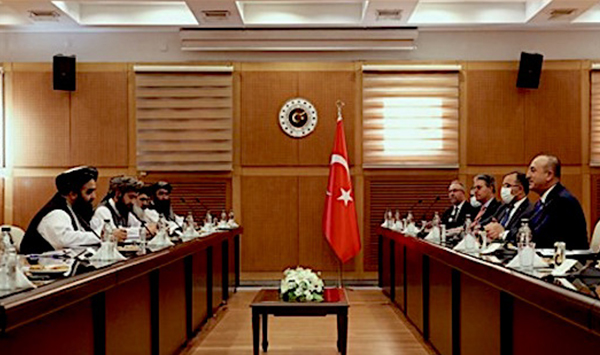 With the ostensible media visit of Taliban representatives in Turkey, one is well beyond plain and simple diplomatic relationships between slightly distant neighbours.

Although Turkey’s Minister of Freign Affairs, Mevlüt Çavuşoğlu provides a rather circonvoluted explanation according to which “Turkey wishes to help Afghanistan without rushing into a recognition of its governance”, the visit took on an official dimension, given its media treatment, and a parallel declaration from Erdoğan announcing that “support was ongoing”.

On the Foreign Affairs side, Çavuşoğlu “exhorted” those blocking financial holdings abroad by Afghanis not to do so. “The Afghani economy must not collapse”, he said. They also had official exchanges should “Afghani migrants in Turkey wish to return”, hoping to obtain “guarantees” on this topic. This probably in anticipation of some possible expulsions treated as “returns”. Finally, the Turkish minister, speaking as the spokesman for “Muslim Countries” requested “returning women to work” and  “girls to schools”.

These political positions are very close to those emerging from G20 leaders who recently pronounced themselves in favor of humanitarian aid. For its part, the EU has already promised to put one billion into the common pot. The great declarations on the welcoming of migrants, quickly contained then turned conditional, are already issues for the past.

Following the American desertion, the after-sale service is getting set up and the Turkish regime – although it did not manage to obtain a strong presence through the administration of Kabul airport, competing as it did with “more Muslim” ones in Qatar – is attempting to play a regional reole. For the Turkish regime, succeeding in making itself indispensable would give an appearance of balance in the complex relations between Biden and Putin.

This is why the Turkish regime deployed the kilim.

The Taliban’s Foreign Affairs minister, Amir Khan Muttaqi, was just back directly from Doha, which has become the base for diplomatic exchanges, after serving as  that of taliban leaders in exile. The fact he travelled to Turkey was in itself a sign of reciprocal recognition, especially since the Turkish Minister also declared he would be doing the same in a near future.

The fact also that he was greeted by the Diyanet (responsible for the management of the Muslim cult in Turkey) shows the angle under which the Turkish regime is attacking the problem and also the growing importance this institution is taking on in Turkey, as part of the governing team and in its foreign policy.

The taliban delegation also met with the “Red Crescent” to express their acceptance, or even their own demands, for the pursuit of humanitarian aid in Afhanistan. Of course, a thaw in the frozen assets would be a plus.

This fake-front reality is in fact the result of an international patch-up following the failed American departure from Kabul. It is also the obvious proof of a policy of delegation to regional powers of questions in need of resolution.

The world has truly abandoned Afghani populations to their fate, this we already knew, but we now find ourselves faced with all the geopolitical ingredients allowing for what is known as “regional stabilization” and a balacing of power forces, in which Iran and Pakstan will play the roles of “the contained” while Turkey will spread its broken wings.

A final illustration of this hypocrites’ ball can be found in Mevlüt Çavuşoğlu’s words – yes, him again – picked up by Anadolu, the official agency of the Master’s Voice, at the time of the visit.

“We provided some advice to the taliban government. Once again, we insisted they must be inclusive in order to insure the country’s unity. We spoke of the importance of including individuals belonging to other ethnic groups than that of the talibans in the new administration”.

Not only did the Minister ascribe to himself a role of big brother but, most of all, he provides advice the Turkish regime does not even follow itself, given the mandatory Turcity. Kurds in Turkey will fully appreciate these fine words at their true level.