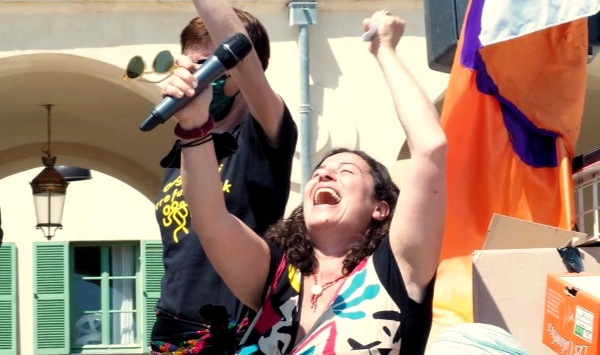 I would like to share with you this magnificent and large meeting of ants I could unfortunately not join myself.  From afar in the Basque country where I live, I followed the preparations for the meeting the nits coming together, with much emotion and pleasure.

Do you know the “festive ants”?

Among them, I am personally familiar with the reddest, the deepest mauve, the greenest and the bluest among them, from Istanbul. I met her as she ran with her packsack, from street to street, country to country, enthusiastically distributing Life Resistance to trees, birds, rivers, human beings…She taught me resistance. I’m learning freedom,  learn to go on moving forward without stopping and without fatigue, and I will go on learning…

Once again, she writes her own manifesto on free living, in her latest novel ‘“The Festive Ants” (to be published in French by Editions des femmes). In this novel, she tells the strange and crazy stories of roads, labyrinths, tales and blues. She narrates in the language of trees and in the smiles of secret loves. With a stick, she keeps the hoop rolling across large avenues and small trails, she shares her poetic spirit with the earth, the seeds, consciences.

The festive ants stitch things together carefully, delicately, slowly. In European towns changing with the faces of migrations and exiles, the Earth ants resist and challenge the mafias, the racists, the multinationals. They carry out their struggle so as to share with all their hope and their happiness.

And so, once again, on June 5th in Nice, the heroines of this novel gathered together to pay homage to humanity, to the trees, the rivers and the birds.

Do novels take their inspiration from life, or do lives construct themselves the way novels do? Avoiding the vortex set off by this question, a manifesto rooted in life was written in Nice, against all oppressions, borders, capital’s terrible predatory ways, against patriarchal and militarist thought, and the world to which it gives rise.

For months on end, ants in dozens of European towns worked with care and enthusiasm to prepare this meeting. They covered a lot of ground, doubted at times, but never gave up.

“Toutes aux frontières – Everyone to the borders” finally crossed all the borders and, on Masséna Square in Nice, on June 5th, the meeting took place. They greeted one another in a number of the world’s languages, in basque, catalan, kurdish, turkish, french, german, italian, castillan, english… They assembled under every color in the rainbow, and with songs.

It wasn’t the usual demonstration where the few prepare and call on others to provide their presence. The thousands of ants gathered on that Square were the very subject of the action. This is why a surge of enthusiasm ran through the crowd, happiness burst forth in laughter,  words were spoken combining love and rebellion.

There were those who stood on a stretch of sidewalk writing their demands in bright colors on their posters. Those who circled the Square on their bicycles, those performing music, reading texts, speaking, holding posters aloft…

On this Square, thousands of hearts of all ages were beating as one,    sharing the same revolt. Ants Yaşar Kemal could describe as “a country garden” chanted yet again:

Imagine there’s no heaven,
It’s easy if you try,
No hell below us,
Above us only sky
Imagine all the people
Living for today.

Imagine there’s no country,
It isn’t hard to do,
No cause to kill or die for,
And no religion too,
Imagine all the people
Living their lives in peace

Festive ants, anarchists, ecologists, queers, LGBTIQ+, socialists, communists, apoliticals, you who once again filled the political Agora with your rebellious hearts, humanity owes you many, many things!