War and a woman, Çiçek Kobanê, in the hands of murderers 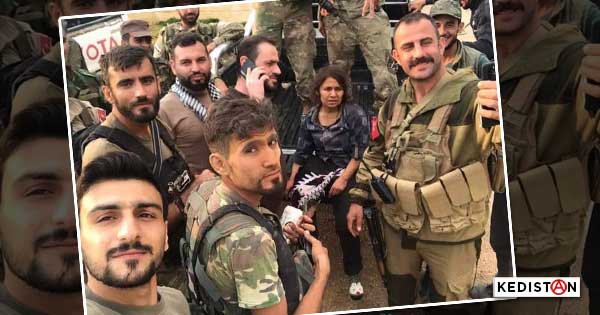 Nowa­days, you can watch war crimes live, filmed by their perpetrators.

Already, 80 years ago in East­ern Europe, SS troops filmed their mon­strosi­ties and archived the geno­cide. The Nurem­berg tri­bunal made use of those images but it took years before they were dis­trib­uted. Nowa­days, the whole world can access them with one click. Polit­i­cal cow­ardice, trea­sons, and cow­ardice before the crimes is only the more abject aspect of it.

War and women in bunny slippers

An anxious woman surrounded by a dozen or so soldiers. The soldiers laugh. On their faces, the pride of having captured an “enemy”. They are soldiers and men at the same time. They have weapons in their hands, military insignia on their shoulders.
The woman is confused.
The woman is alone.
The woman is desperate.
The young woman’s condition increases the appetite of the horde massed around her head. What are they thinking?
Taking selfies with her, sending them to their families…
Or killing her.
Perhaps raping her before killing her… 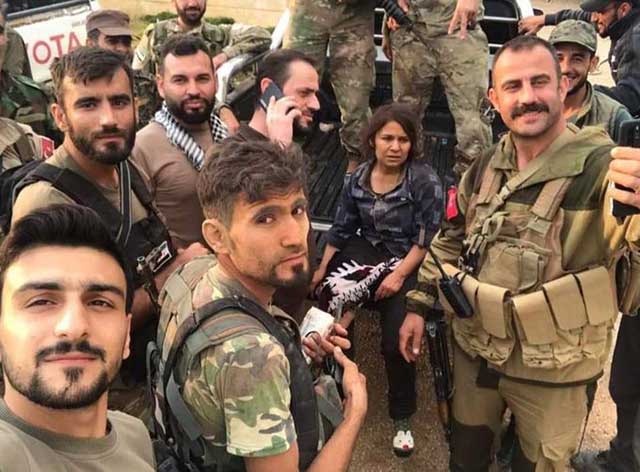 And the woman’s eyes.
Her pupils.
They tell me so many things.
I must bury myself six feet under and never come up again.

The animals…
The children…
The women…
A silent mass whimpering under the persecution of my fellow creatures who, with their penis and their weapons, shit in the Earth’s mouth.
Cruelty, blood and suffering have infected the world.
We can’t get over it anymore.

Who knows, maybe victory will come from women wearing slippers with bunnies on them, against the men with their weapons and their stripes, and we will be able to breathe a bit.
Who knows…

The lead image was tak­en from a video shared as a vic­to­ry by the Jihadists who cap­tured Çîçek Kobanê.

SOHR, the Human Rights Obser­va­to­ry of Syr­ia, announced that the Jihadist on the video who, while laugh­ing, threat­ens to “cut (her) throat” and calls her a “PKK pig”, is one Yas­er Abdul Rahim, founder of the group of gangs called Fal­laq Al Majd, part of the El Sham Corps close to the Mus­lim Broth­ers. This man also took part in the “Euphrates Shield” and the “Olive Branch” oper­a­tions con­duct­ed by Turkey, a mem­ber of NATO…

Since then, there have been no news of Çîçek Kobanê. The YPJ declare that the young wom­an’s life is threat­ened and call for action.

Mean­while this same Jihadist, already accused of war crimes, is invit­ed live on Al Jazeera, with­out this so much as rais­ing an eyebrow!

Appar­ent­ly, thanks to media cov­er­age and inter­na­tion­al mobi­liza­tion, the YPJ “pris­on­er” Çiçek Kobanê was not left by Erdoğan to the bar­bar­i­ty of his Jihadist back-ups. She is report­ed to be alive and trans­ferred to Turkey for judg­ment (accord­ing to Turk­ish media).
Via Roja­va France on Twit­ter, which you can also fol­low ! @RojavaFrance