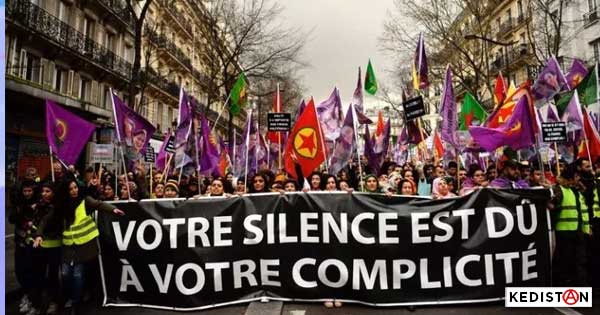 Jacques Massey is an independant journalist with a background in linguistics. A specialist on security issues, he is the author of several books (ETA: Histoire secrète d’une guerre de cent an “ETA: the secret history of a hundred-year war”, Bioterrorisme, l’état alerte” Bioterrorism, the state of alert, “Antiterrorisme: la méthode française” Antiterrorism: the French method). The magazine Sang-froid (on sale on July 10) publishes an excellent column, terribly topical, that lifts the veil on the harmful action of the Turkish secret services (MIT) in France and in Europe, based on an analysis of the inquest into the assassination of three Kurdish activists in Paris on January 9 2013, a political crime in its fullest sense, covered over by State secrecy, but in which the relaunching of the inquest points directly to the involvement of said secret services. It also provides an explanation for the attitude of politicians disinclined to search for the truth and quickly hiding behind the notion of Defense secrets.

A Triple assassination in Paris: a sensitive business

According to Jacques Massey, the policy of confrontation against the Kurds engaged in by Turkish President Recep Tayyip Erdoğan is at the origin of the triple assassination in Paris in January 2013. The matter brings to mind Trotski’s assassination by Ramon Mercader, and NKVD agent who eliminated Stalin’s adversary in Mexico in August 1940: the modus operandi is similar, with the fastidious setting up of the killer in the victims’ environment before commission of the deed.

This affair adds to the already long list of – unresolved – assassinations against their opponents, perpetrated in France by authoritarian regimes. In the matter of the triple assassination, the magistrates instructing the inquest had given consideration to a possible involvement by the Turkish secret services, but no one wanted to head in that direction: attempting to elucidate the causes of the death of the ex-contact of the French socialists then in power and of her two comrades risked revealing the active role of the Turkish services. This would have raised too many diplomatic problems.

Normalization of relations between France and Turkey was carried out on January 27 2014 during François Hollande’s official visit to Ankara.

The MIT Antenna in France

Some twenty individuals make up the MIT antenna in France, under diplomatic cover – affected either to the Turkish embassy but also to the OCDE, UNESCO as well as the consulates in Lyon and Marseille. The general consulate in Strasbourg, where Turkish agents are in growing numbers, holds a special place in the structure because of missions also aimed at European institutions. If “homicide” operations are under the direct responsibility of Ankara, in order not to offend French authorities and risk accusations of breaches in national security, the MIT allows itself many things when it comes to collecting information and infiltration. Workers’ clubs, cultural associations, mosques and commercial organizations constitute so many useful entry points for every kind of intervention… The matter involving mathematician Tuna Altınel is flagrant proof of the surveillance exercises on opponents having taken refuge in our country… Today, the MIT has all the characteristics of the omnipotent security arms of authoritarian regimes (billion dollar budget, modern means of action, immunity for its agents, surveillance and infiltration techniques, recruitment, elimination of opponents.)

Jacques Massey provides a few examples of MIT actions in Europe: In the opening months of 2017, investigators in Brussels noticed that a (Kurdish) employee had approached his (Turkish) boss residing in Lovendegem “in order to work in favor of the Turkish government”. In plain language, he was to infiltrate local Kurdish associations with special emphasis on one of their animators, Remzi Kartal, alredy targeted in 2012 during the preparation of the Parisian assassinations. The concerns for isolation in such cases had led to the installation of the officer in charge of the matter in the Parisian region, leading him to communications with his informer thanks to phones registered in France. According to a Belgian judiciary report, in mid-June 2017, the agent met four colleagues in Paris, including “one high-ranking policemand and a sharpshooter.” This information led the Belgian authorities to sollicit cooperation from the French judiciary in order to obtain more information and block the operation thus being prepared. At the time, their suspicions were reinforced by the “coordination” role played by a “high- level personality of the Turkish diplomatic corps,” stationed in Paris…

In a similar manner, the MIT’s lack of discretion led to their discovery by Swiss police. And Jacques Massey concludes: finally, the bundle of corroborating evidence led Belgian, French, German and Dutch magristrates to exchange information. There can be no doubt that this coordination has acted in favour of the reopening of the file, as requested by the lawyers of the Kurds assassinated in Paris. A decision reached with the –unexpected – preliminary approval of the new prosecutor in Paris, Rémy Heitz. Given the French judiciary’s record of unpunished State crimes, this is definitely a break with an ancient habit.

Headline image : Demonstration honoring three Kurdish activists assassinated in Paris on January 9 2013. (Banner reads: Your silence is due to your complicity)