Internationalist Commune of Rojava • The resistance is not over 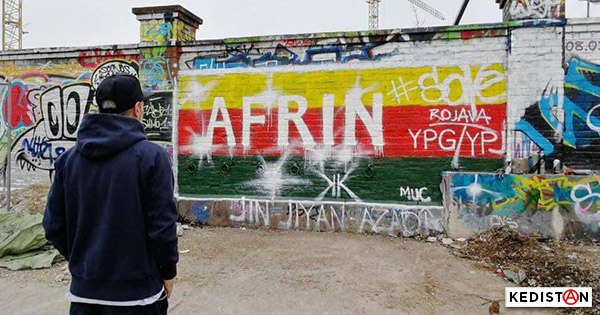 The Common Internationalist of the Rojava publishes on internationalistcommune.com an open letter, calling for a solidarity with Rojava. To expand the visibility of this letter, we publish it on Kedistan, and with solidarity, we join to this call.

The resistance is not over

Open letter after the #WorldAfrinDay

We, who are working here in Rojava as internationals, are part of the worldwide fight of the opressed against the reign of state, capital and pathriarchy.

The #WorldAfrinDay has been a historical example of resistance and international solidarity. Thousands took to the streets and stood up against this war, giving their support to the resistance and values of this revolution. Solidarity came from more than 50 cities from all around the world, and it proved how important what is happening here is for people. New groups and new people are organizing their solidarity, getting involved and defend the revolution. From Canada to Australia, from Mexico to Japan, the world has shown that Afrin is not alone.

For two months, the bombs of the Turkish army have been falling and killing people in Afrin. During these same two months, there have been worldwide actions against this occupation. And they will continue. Afrin, as the western canton of the Democratic Federation of Northern Syria, will be defended as the beacon of hope that it became, as the source of inspiration that it is. The bottom-up democracy, with women at the forefront building social ecology, is what the capitalist system tries to keep locked up, claiming that ‘there is no alternative’, that utopia is not possible. But here, we learned that another world is not only possible, but necessary, and it just depends on how much we believe in it, how determined we are to bring this utopia into existence.

Afrin is now under the occupation of the Turkish army. After these months of resistance, to see the occupation forces entering the city may seem like the utopia is going away once again; but no one said the revolution would come around easily. It was something we had only imagined before coming to Rojava, and witnessing with our own eyes what’s going on here. Today, here, we are taking on several centuries of the capitalist system and nation-state model. We are challenging thousands of years of patriarchal oppression and male rule power. We are challenging the essence of how society itself is perceived and organized.

But we will reflect on that, and we will learn from our mistakes. When the next attack of the ruling powers strikes once again, we will be wiser and more experienced, and more capable of defending ourselves and the people around us. We know that this can happen at any time, maybe tomorrow, and we know we can not do it alone. We need to be able to see the threats before they are too big to overcome. We need to have better and deeper analysis of the situation we are in. We need all the hope and the international solidarity that this revolution is raising in people’s hearts. And that’s why we call on you to come here.

Come and see with your own eyes what is happening here. Come with an open mind and heart, ready to challenge what you believe humanity is able to accomplish. Come to learn, to support and to organize this revolution. Come and help us to create the international movement that will be able to change the capitalist drift that humanity is suffering.

But if you can’t come, there are still a thousand ways you can contribute to this resistance. We need to think how we can make this revolution successful, and what can be done in every place to achieve this aim. As internationalists, we need to be able to act and interact with the society we are in. We need to learn from the past movements and analyze what are the best ways to face oppression. From mass mobilization, to civil disobedience. From solidarity demonstrations, to direct actions. Yesterday, we showed the world that together we are strong. But the situation in Afrin today showed us that this is not enough. So now, we need to open a global debate about what should be the next step.

– This open letter is a call to all the people and groups who took an active role in the #WorldAfrinDay, and also to other initiatives in solidarity with the Afrin resistance. We want to open a public debate. We will be expecting your answers, your ideas, your proposals. We also call for your support to spread and translate this letter, you can find our email in our website.