Exhibiting Guernica without making a sound 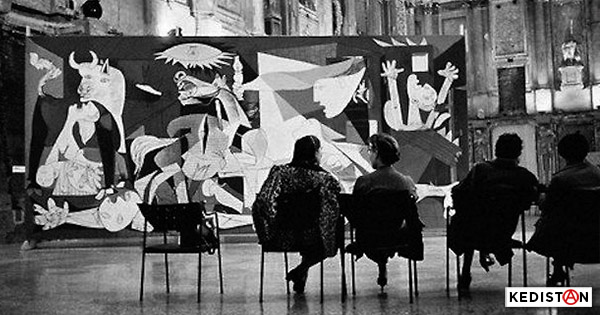 Let’s imagine for a moment that, in June 1937, a cultural space in Paris had offered to exhibit Guernica, you know that work by Picasso, but wanted to avoid mentioning the situation in Spain in any way.

This monumental canvas is a committed denunciation of the bombing of the town of Guernica which had just occurred during the Spanish war, a bombing ordered by the Spanish nationalists and executed by German nazi et Italian fascist troops.

In Paris, the Blum government abdicated under the pressure of those events.

What would a Parisian cultural space have done then, had it been offered the opportunity of exhibiting Picasso’s Guernica?

It would have consulted with its superiors.
Or perhaps, in a jolting  attempt at existing on its own and won over by the beauty and power of the work, it might have attempted to reduce its political impact by transforming it into “a masterpiece of contemporary art” in order to hang it on its walls.

We are in 1937, Picasso is already an established painter which is why he was commissioned for the work.

But the Popular Front govenment has decided to keep a low profile over the Spanish war.

So the cultural space is up shit creek without the proverbial paddle. Exhibiting Guernica and talking about the Spanish revolution means running the risk of being called to account, or of seeing doors leading to funding, closed.

So, in a creative surge, it looks for a way to exhibit the work as describing bull-fighting, and organizing a round table with anti-bullfighters; contradictory free expression having its requirements…It even considers the possibility of inviting a German picador…

Silence, this is an exhibition!

I had a nightmare, that’s all. I saw myself negotiating over the exhibition of Zehra Doğan’s works with a Parisian cultural space. And I’m still trying to understand how a dream can turn so screwy…