World • Erdoğan meets the Pope at the Vatican 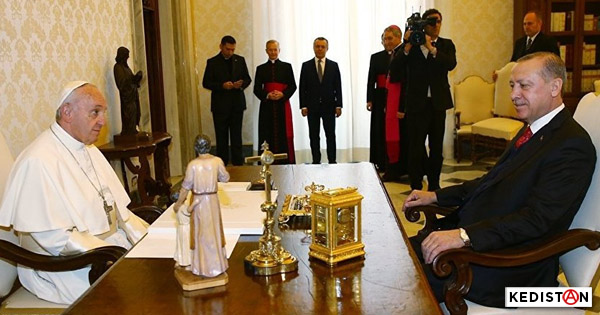 We therefore take this opportunity to draw a stylistic comparison between the “before” and the “after”, it being well known that running into His Holiness can trigger the action of grace…

What was this crusade about?

(Subtitled in English and in French, choose the language by clicking on the subtitle and parameters icons.)

The French translation we have provided was done in the language Erdoğan would use. In most cases, the translations are done in high language, as if the President was a man of letters. You should know that Erdogan uses the familiar “tu” and “toi” with the World and with Europe, as if speaking to his servants and flunkies, and he didn’t hesitate, for instance, upon returning from France, to make fun of Macron, whom he said he had “folded”.

The Turkish press allied to the President makes ample comment of the visit and seeks ways to increase the Reis’ stature, of course. We are not told if, as was formerly the custom, Erdoğan started off by kissing the Pope’s mule…Mule? What did you think? The mule is nothing but the white slipper on the foot of His Holiness…

Erdoğan came late and the meeting started with a 20 minute delay. (Putin, 50 minutes and Queen Elizabeth 20 minutes, apart from that, it is rare for visitors to forget the schedule apparently). 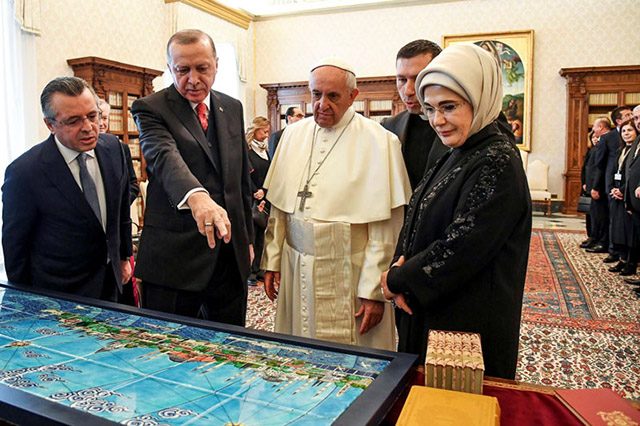 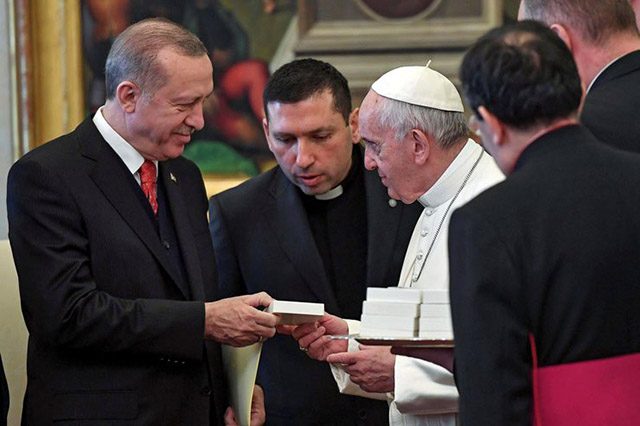 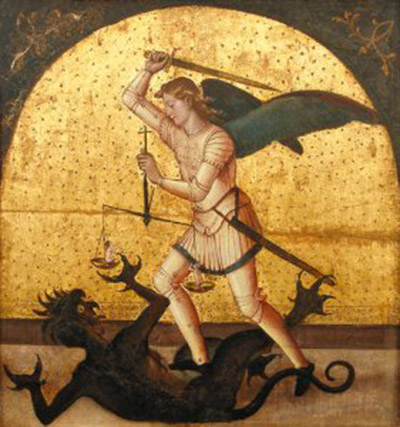 The Pope offered a medal on which appears the angel vanquishing the demon. “This is a medal which represents a world based on Peace and Justice“, said the Pontiff.

And since the fact the Pope accepted to meet Tayyip has provoked strong reactions, some progressive media in Turkey attempt to read into this “a subliminal message”.

The crisis of the chair

Following the visit, Erdoğan’s supporters invented a “crisis of the chair”.

Translation of his fan’s words [the original is full of mistakes…  for a Turk proud of his Nation, not being able to write his own language tops everything!] :

When he asked for a chair at the same level as the Pope’s, the small chair they offered stayed in their hands… They were going to humiliate Erdoğan in the eyes of the World, once again he defeated their political power schemes…

There was no chair crisis at the meeting between the President of the Republic Erdoğan and Pope Fransiscus at the Vatican…Don’t attempt a useless public opinion operation. Stop saying that the chair that was set aside for the translator was meant for Erdoğan and that he had it replaced. You are making yourself ridiculous.”

Thus ends the story of the 3 bears… 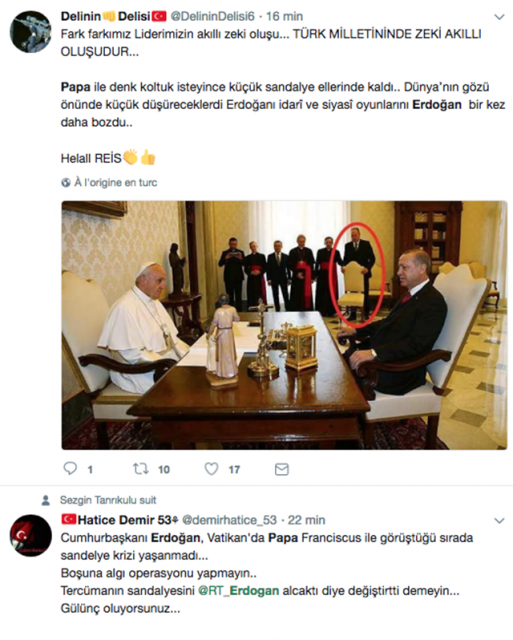 Humanists will appreciate this homage paid to the Calliph by the authorities at the Vatican. Many will no doubt be expecting a comment, a position statement following the reception of a notorious assassin by a moral and religious authority.

And in order to stay clear of hazardous comparisons, and for the simple fun of it, we invite you to re-listen to the magnificent text by Jacques Prévert that spoke volumes about the receptions at the Vatican in the thirties… the visitor then being El Duce, Benito Mussolini.
[Translator’s note: No English translation here, but whether you understand French or not, Serge Reggiani’s masterful interpretation is worth a listen].