Europe • Walls, with the dead as backdrop 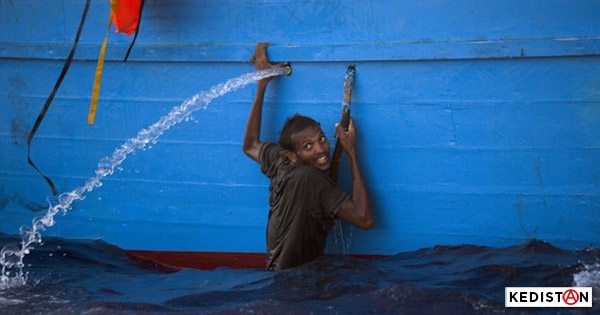 I know, some say a column by Mamie Eyan on Kedistan is like a conversation in a tea garden. No political depth, and not at the required level.

But you’ll have to go on waiting before I take my final bow.

And speaking of depths, I would like to talk about sea depths.

For once, I don’t want to grumble as usual against our Reis but against those who give him the means to shine in social settings: namely, the European leaders. More specifically, those financing a new slave trade in Libya, after having financed the AKP regime for it to filter the migrants coming from Turkey and war regions.

Even if we regularly hear our ministers complaining we’re not seeing the color of the promised euros fast enough – the ones to finance our role as European border guards – it is obvious that this agreement, reached a while ago already and negotiated by the same Dame Merkel who took in the greatest number of migrants your countries did not want, this agreement, I say, built a wall on the sea, starting on the Turkish coasts.

If you add to these the inner walls of barbed wire that have sprung up on your democratic territories, some in Hungary, some in Austria and elsewhere, and why not in your lovely French Alps, you quickly understand why Libya has become the new migration route toward Europe.

I’m not the one saying this, the associations defending human rights are saying it, and with a stronger voice than mine.

In European history, there is the trace of a wall on the Atlantic, built by nazism to stop an American landing on the coast. Now your leaders are repeating the exploit on the Mediterranean. But since we are now in the virtual era, Lafarge isn’t providing the concrete, the European Union is providing the basic requirement, euros, for the new border guards with their new equipment.

I didn’t really need a translation when I saw this go by. It is ignoble, inhuman, and worthy of the highlights of the 20th century.

And since I had seen the one about the slave market before, I didn’t need much thinking time to tie the two together.

Your wall on the Mediterranean simply serves to let people die far from you by financing their tormentors, in order to safeguard your interests and, so they say, reverse the current unemployment trend.

With Erdogan, Dame Merkel had revealed and negotiated the financial aspects of the deal. This time, we don’t even know how much money is involved, such haste and shame being involved in the transaction. But remember, this is being done in your name: they say you are a majority “not wanting them here.”

In the same way as you have designated the Kurds to get killed in your place against ISIS, and let Bachar torture his people under Putin’s conquering gaze, you want to create your detention camps outside Europe, so fearful are you of the migrants’ bodies sullying your lands. I had another idea of Europe…

I must have made the same mistake as you did when you thought there was democracy in Turkey prior to Erdogan…To each his own blindfold to avoid seeing reality and fight shamelessly for his own interests. All this, in the heart of Nations.

At this point, contrary to what some say about me, I think I’ve touched bottom.

They say you repulsed the rancid nationalists of the far right and kept them out of the voting urns. Frankly, seen from a distance, you get the opposite view. Your Left drapes itself in the blue white and red of France, for instance, and your liberals form alliances with the worst to transform migratory flows into maritime graveyards or concentration camps for new slaves…And all this to the sound of declarations about “humanity” from your millionaire politicians.

We, in Western Turkey, have abandoned those in the East to a massacre carried out by the forces of the Turkish State. Those who reacted against it are now in jail or about to go there.

And you, what are you doing so that the walls erected by the EU to protect you don’t become the panels of the coffin to your human conscience?

I know, I know, no depth to my thinking…and I’m speaking to the wrong audience, none of this is your fault…But at my age, sounding off provides some relief, at least…

What did you ask Santa Claus for Christmas, a coastguard outfit?