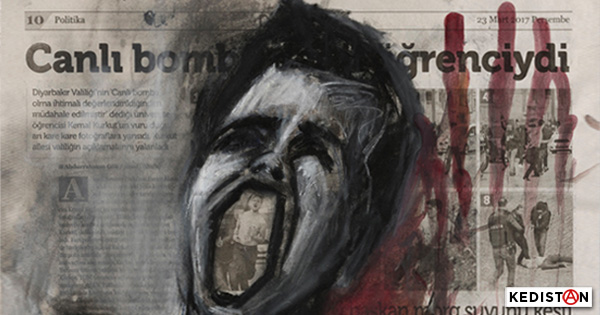 I was taught to always begin a short story with a pretty word, a note, a lovely sentence out of context. A real counterfeiter’s job. That way the male reader would be carried away, the female reader conquered.

If the word was filled with orientalism, if it suggested the Bosphorus, the sentence would linger like the smoke from a vapur. Don’t forget to describe the cry of the seagull flying by, to underline the distress of the loveless woman writer, the cold seeping into the August evening.

At that point, the prey is almost inside the cage. You have managed to hold him all the way to the seventh line, the exact number of a cat’s lives.

But I’ve forgotten this lying, false poetry. I have become devalued by contact with the real.

So ask youself how I, a mere Kedistan scribbler, can apprehend as a journalist, the mysterious alchemy of empty words expatiating on caged Art?

Luckily, I can do without when, setting aside time spent reviewing the translation of her letters, I simply  put impressions on images given to see with eyes wide open by Zehra Doğan.

She would hate it if, comfortably sitting in front of screen, we talked about her as a victim, and developped pathos dragging her to the depths where an adventuress would have lost herself, where floating pale and enraptured, a thoughtful drowned one sometimes descends… To make people cry and moan is an easy way to carve out a statue for a lucky two-bit humanist.

Zehra, and her co-detainees with her, will never claim the role of victim the Ankara Ubu Reis wishes them to play. Nor does she, at twenty-eight, aspire to that of Antigone or that of K. No doubt, she is held prisoner by absurd walls in a stone castle, but she claims their disappearance and her freedom.

” I used to fear that in the absolute darkness of the walls built around me, with no knowledge of my roots, I would settle into the situation, reconcile myself with the persecution to which I am subjected, that I would lock myself into the jail of my inner world.

In this space where everything is constantly restricted, where even a pencil is hard to find, I will learn how to create existence out of a void.”

Last October when her jailers confiscated the works she was exfiltrating one after the other, she must have dried a tear, no doubt, but expected none from others, and especially not from the dramatizers.

Several months spent in the din of a town under siege, with only companion the smell of blood, teaches you not to ask for people to cry over you. So “false poets with paper hankies”, move on!

Zehra draws, Zehra paints, Zehra writes. She transforms the daily reality of collective confinement into tiny space for thought, exchanges, learning. Words on so many ills.

” I set aside 4 hours every day with one of my co-detainees to write a novel based on her life story. I draw and I paint whenever I can. And I’ve also started giving drawing classes to my friends here. In a way, I socialize art in my fashion. They love to draw. Soon, I’ll be able to teach them how to make a paintbrush out of bird feathers found in the yard.”

So, these same free birds have brought here drawings, canvasses, compositions that slowly, will be exhibited on white walls, like so many traces of fresh blood. 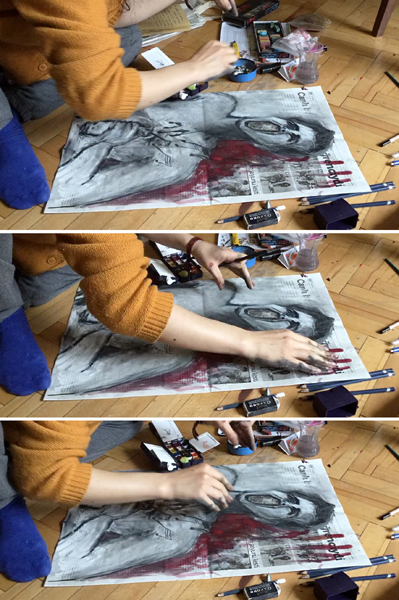 In her drawings, in the colors hastily thrown on newspaper, are mixed reminiscences of Edvard Munch’s Cry, and of The Rite of Spring where the Turkish State sacrificed a young musician, the way a tortured body is offered up to genocide. “No, Kemal Kurkut was not a human bomb”, the title read on a paper that will yellow with age. She painted what her eyes, even wide open, could not see from within her temporary refuge, while she went in hiding awaiting her prison term in the early months of 2017. No doubt, she painted it with thoughts of her loathing of the deaths she witnessed in Nusaybin’s shattered decomposition. The young man holds the water of life in his hands and his head sounds like a breaking violin.

As a shaman would have done to ward off death by dipping the chicken’s paw in the blood of the carcass, Zehra could not keep herself from putting her own red hand on the paper.

On the right, in black and white, the police will hold the pose for all eternity, weapon in hand, as a reminder of the State’s power. On all the public squares in Turkey, the statues have never done a better job. See the Turk’s power!

It is Kemal Kurkut being assassinated.

How many black and white photos were done at Babi Yar?
How many fingers had Victor Jara ?

Off-topic, they will yell at me. Wrong note.

Zehra has since been released. This work is now in the collections of the MUCEM in Marseille.

For more information, consult the special dossier on Zehra Doğan